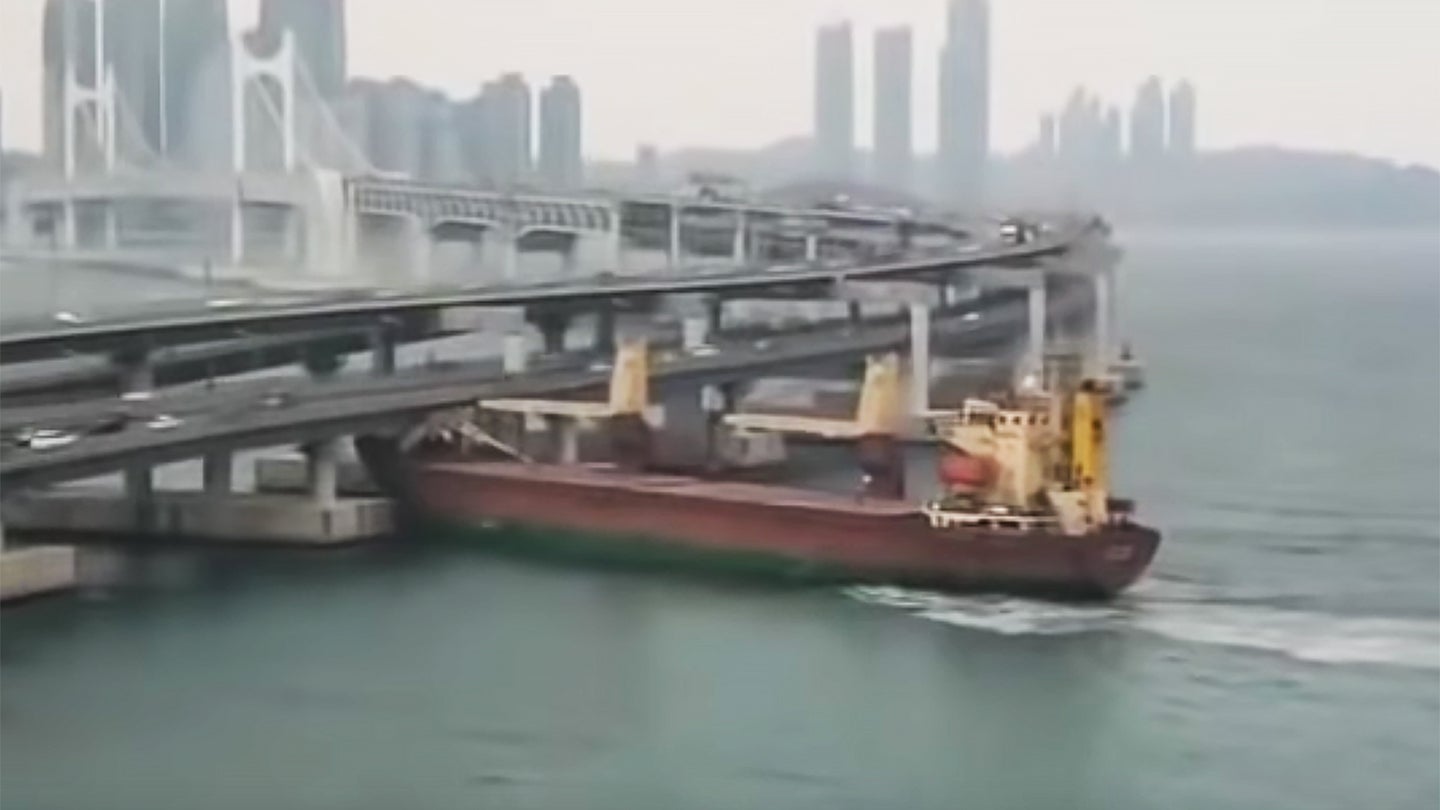 A Russian cargo ship sailing under the direction of an inebriated captain smashed into a major highway bridge near the port of Busan, South Korea during afternoon rush hour on Thursday, damaging the vessel and tearing a hole in the bridge's steel structure. The vessel was later detained by the Korea Coast Guard after it fled the scene.

According to Yonhap News, the 370-foot Seagrand had arrived in Busan on Wednesday and set out for its home port of Vladivostok, Russia carrying nearly three million pounds of steel coils when the accident occurred. The map shows it should have sailed north along the coast before making its way across the eastern edge of the Sea of Japan.

Instead, it traveled just a couple miles before inexplicably turning into a small bay and heading straight for the Gwangan Bridge, a double-deck structure that stands as the second longest span in the country. KCG officials tracking regular ship traffic saw the deviation and radioed the ship to turn around, but JoongAng Ilbo reports the captain appeared to neither speak nor understand English well enough to respond.

An eyewitness video filmed from a distance shows the Seagrand moving ominously toward the bridge as cars pass by unaware; it does look like the ship is furiously trying to reverse by this point, but it's too late to prevent a collision. The crash takes out the Seagrand's foremast and punches a sizable hole in the bridge's underside. There's also a closer view in which you can see a deckhand running away as the tower collapses, while traffic begins to slow on the bridge as concerned drivers realize what's happening.

What the video doesn't show, unfortunately, is that the Seagrand then fled the scene like a regular old hit-and-run. Of course, it was still being tracked by the Korea Coast Guard like any other merchant vessel, so a squad of four patrol boats quickly intercepted the damaged ship and forced it back into port. That's when authorities breathalyzed the captain and saw his blood alcohol content was 0.086 percent—the legal limit in this situation is 0.03.

Though it's unclear whether he was actually at the controls of the Seagrand at the time of the accident, the unnamed captain was still arrested on charges of sailing under the influence, as the vessel's direction and safety are ultimately his responsibilities. Authorities also suspect the Seagrand struck a docked cruise ship as it made its way out of Busan before hitting the bridge, portions of which will remain closed through the weekend as the damage is fully assessed.