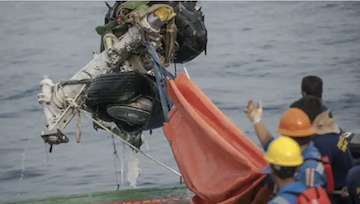 As details have trickled out following the tragic Lion Air Flight 610 crash in Indonesia last week, one thing has become clear: the crew likely had an unbelievably confusing and desperate situation on their hands.

Signs appear to point to an instrument failure in the brand-new Boeing 737 Max, specifically the angle-of-attack sensor, which is critical to determining the amount of lift generated by the wings. That failure caused the aircraft’s systems to think the airplane was in danger of stalling, causing the computer to steadily adjust the trim tabs on the horizontal stabilizer to nose the aircraft downward, thereby picking up speed. When the same instrument failure didn’t indicate any improvement in the situation, the airplane’s computer continued the move. As pilots worked to correct it, it would let them—briefly interrupting the autopilot’s control—but then continue attempting to pitch the airplane downward.

Further aggravating the situation would be the fact that the trim tabs would have likely eventually reached their fully deflected position—that is, positioned all the way down—so that when the pilots pulled back on the controls to try to level off, it would have been nearly impossible to do so. All of this appears to have transpired in just 12 minutes, meaning the crew had very little time to assess the situation, figure out what was happening, and then take the appropriate steps to correct it. Audible and visual stall warnings and stick-shaker mechanisms would have likely also been activated, creating more chaos.

Last night, Boeing issued an “operations-manual bulletin” reminding airlines that their crews should use existing guidelines when dealing with faulty sensor situations such as this one. These bulletins are routinely issued by aircraft and engine manufacturers, particularly in the wake of major events, and this one does little except remind crews that the procedures for addressing this situation already exist. They essentially instruct pilots to use “higher control forces” to overcome the dive—meaning, pull back hard on the controls—but then to disable the automatic trim system and set the trim manually. That last step appears to be what the Lion Air pilots didn’t do, perhaps because they couldn’t recall the procedure or they weren’t fully aware of what precisely was happening.

It seems obvious to say that such situations shouldn’t happen in this day and age—and clearly the investigation is still in its earliest stage—but it is troubling to see something so deadly transpire in the most modern aircraft in the Boeing fleet. If it proves true that the AoA sensor was at fault, the investigation will reveal much about what the pilots knew and suspected when confronted with the situation, what their training was like, and not only what their responses to the incident were, but also what they should have been. The investigation will also reveal what the airline knew, in the wake of what appears to be no fewer than four incidents in total of the same failure in the previous flights, why its fixes weren’t sufficient to prevent the accident, and why this crew wasn’t reminded of the procedures after the previous three incidents.

But more importantly, the investigation—led by Indonesian authorities with the cooperation of Boeing and the U.S. National Transportation Safety Board—will determine what changes should happen not only to prevent the sensor failure from reoccurring, but also to prevent such a failure from spiraling so horribly out of control if it does happen. After all, even if pilot reactions are proven to be contributing factors in this tragedy—responding inappropriately to the situation, for instance—that doesn’t absolve aircraft manufacturers and the airlines of their responsibility to design systems that can minimize as much as possible precisely that risk of human error. Of course, this is something engineers already do to a staggering degree, as we can see from the generally incredible recent safety record in global aviation. But clearly something went very wrong here that shouldn’t have. Aviation systems must account for the possibility of misinterpretations of situations and foggy memories of procedures outlined in the manuals that come with these huge, complicated, and incredibly sensitive vehicles. In short, they have to accommodate everyone from the best-trained pilots in the world to the worst.

This isn’t to say that the Lion Air crew was in the latter group—despite safety problems in the past with this airline, this specific crew may have absolutely been first-rate aviators, yet still suffered the same fate. But the fact is that we’re in an era of increasing automation in aviation that’s still 100-percent overseen by human pilots. If pilots can’t figure out what’s going on with their aircraft instantly and without uncertainty, and if the aircraft itself can’t do so, then we still have a very long way to go.