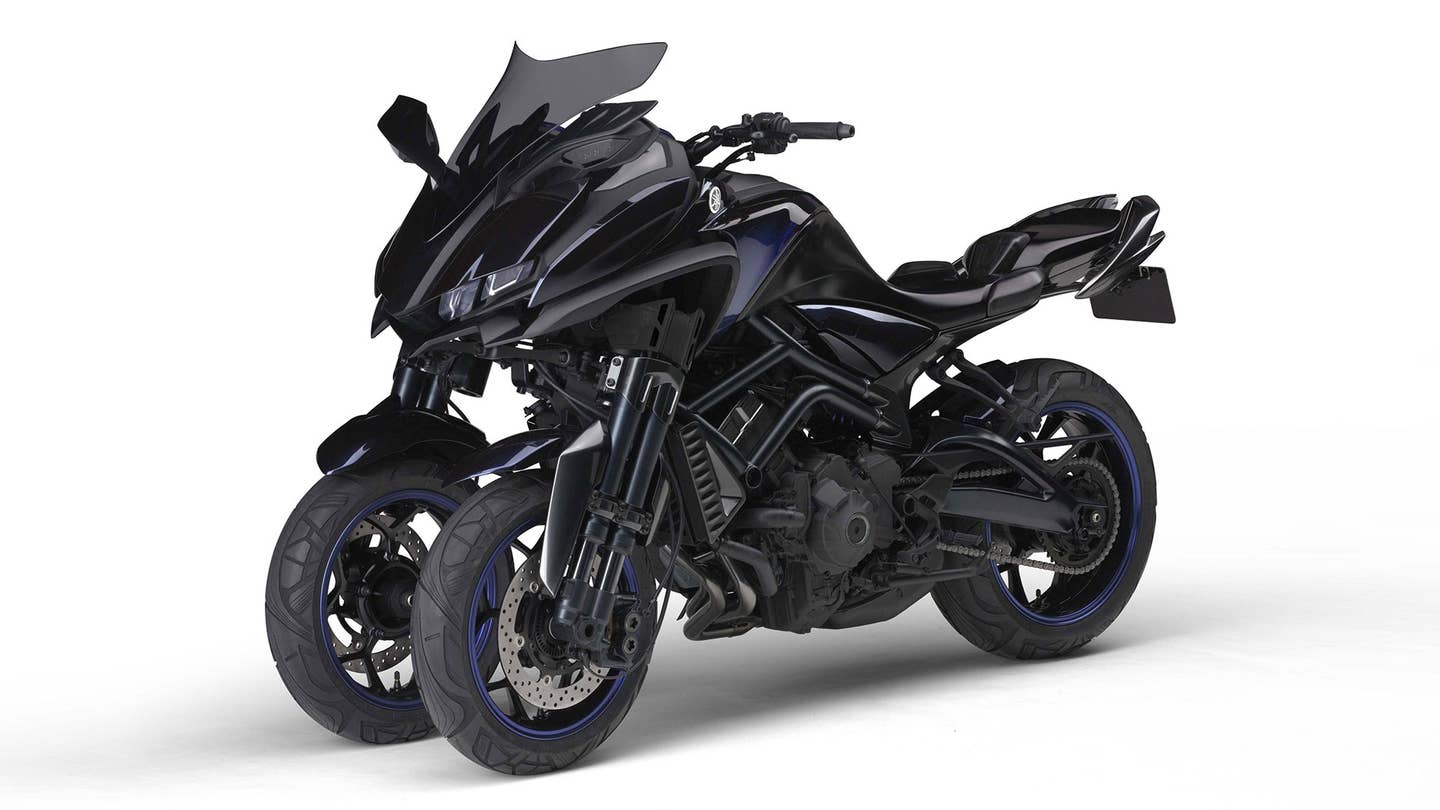 Scriveners have surmised all kinds of reasoning for the recent increase in three-wheeled offerings. Maybe it's meeting global mobility needs or demand from older riders for open-air thrills with more stability, or even the motorcycle industry bumbling through its desperation to connect with millennials. Somewhere on that spectrum is Yamaha, having all but confirmed that it’s about to launch an oddball three-wheeler called the MWT-9. First shown at last year’s Tokyo Motor Show, it combines the major elements of Yamaha’s Tricity scooter and its FZ-09 motorcycle. The final package is less like either, and more like a glitch in the matrix.

But there is some logic behind it. Currently, Leaning Multi-Wheel (LMW) offerings have been limited to scooter-ish mutts like the Honda Gyro, Piaggio MP3 and Tricity, and the canopied mash-up Toyota i-Road. The MWT-9 would be the first production LMW with proper motorcycle looks and power.

The side-by-side wheel arrangement in front is altered from the Tricity by placing the upside-down forks on the outsides of the wheels. This, according to Yamaha, delivers motorcycle sensations with the additional traction,stability, rigidity, and lean angle desired. It also begets the MWT-9 sales pitch: This is a “Cornering Master” intended for fun and sportiness. The engine is the liquid-cooled 847cc three-cylinder from the FZ-09. States output is 113 horsepower and 64.5 pound-feet at 8,500 rpm, a clear jump up from the 125-cc Tricity. The bodywork has a gentler slope than the FZ-09 and seat placement that's slightly lower and further back, with three headlights in front to maximize the triplicate theme.

Two years ago, Yamaha said it would bring more LMW products to market; the Japanese firm applied to trademark “MWT,” declaring it'd use the designation on “motorcycles, scooters, mopeds, three-wheeled motorcycles, three-wheeled scooters, three-wheeled mopeds and parts and fittings thereof.” Some predict we could see a production MWT-9 at this fall’s EICMA motorcycle show in Milan before it goes on sale next year. It’s unlikely to go on sale here, but we already have a heap of non-leaning options. So just take another sip of the potion, enjoy Yamaha's oddball from afar, and leave the three-wheel motion to some other masochist.