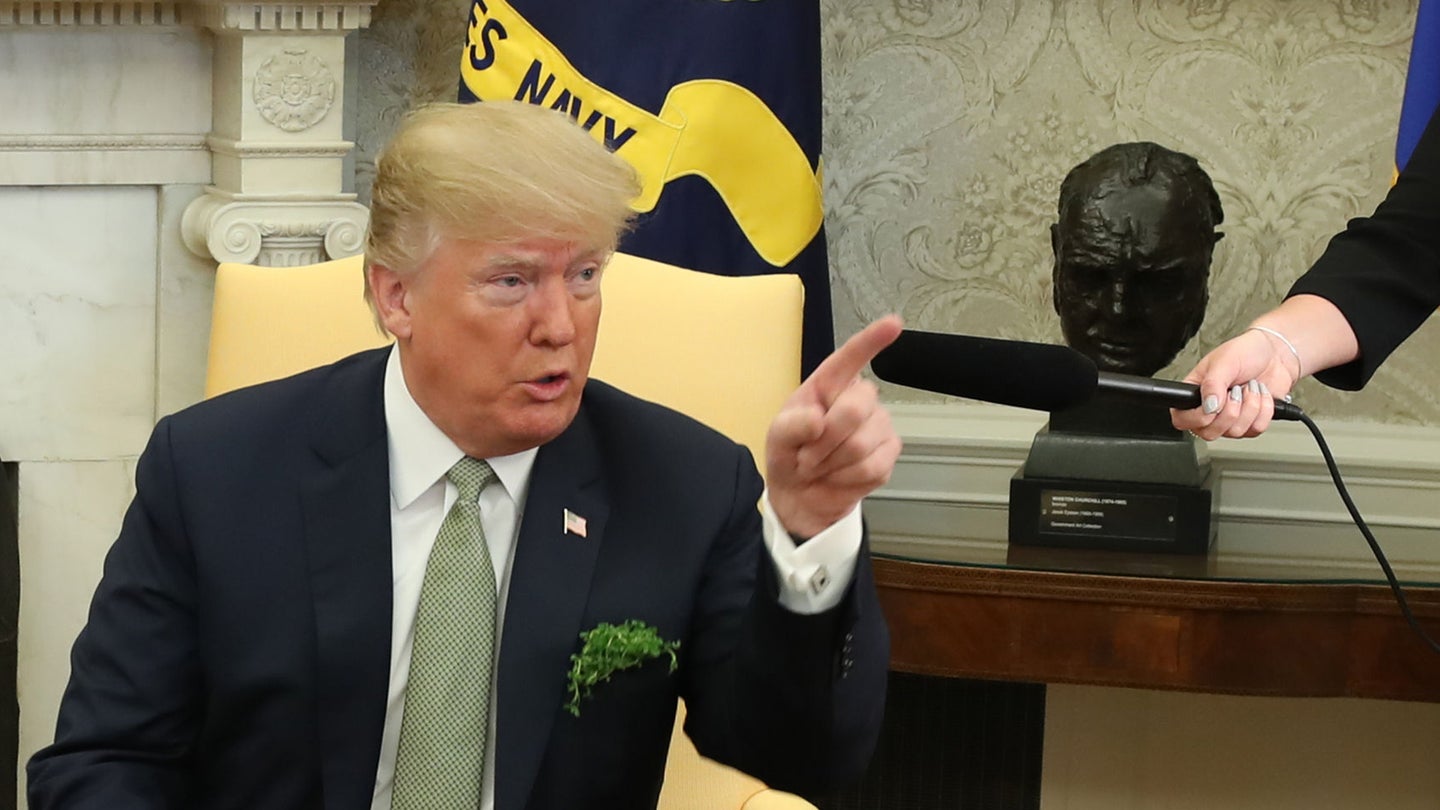 Well, that's...new. In a speech to donors on Wednesday, Donald Trump claimed that Japan is testing new cars by dropping bowling balls onto the hoods.

"It's called the bowling ball test; do you know what that is?" Trump said, according to The Washington Post, which reportedly received a recording of the private event in Missouri. "That's where they take a bowling ball from 20 feet up in the air and they drop it on the hood of the car. And if the hood dents, then the car doesn't qualify. Well, guess what, the roof dented a little bit, and they said, nope, this car doesn't qualify. It's horrible, the way we're treated. It's horrible."

"We send a car to Japan, they analyze it for four weeks before they decide to send it back because it’s not environmentally friendly," Trump said, according to the Post. "One of the car companies actually had a car made and it was the most environmentally perfect car, cost them a fortune. They spent a fortune…but they wanted to see if they could get it in [to Japan]. And it, they were going crazy. Four days went by. Then five days. And they were ready to approve it and they said, no no, we have to do one more test," he said, referring to the bowling ball test.

Such a test as Trump described would not only seem physically implausible, but would also seem contrary to many modern automotive safety measures, in which vehicle parts are designed to deform in order to absorb kinetic energy. A Honda spokesperson told The Drive he was not aware of a "bowling ball test;" however, he stated the carmaker does test for pedestrian impact safety by using a cannon to fire a "head form" (an object roughly the shape and weight of a human head) at the hood and other parts of the vehicle, but that such tests were designed to make sure the hood and other pieces collapsed as intended to absorb impact.

(The Drive reached out to representatives of several other Japanese automakers for comment; we'll update this story with any further response.)

According to a tweet by Washington Post reporter Josh Dawsey, Trump has been known to bring up the so-called "bowling ball test" before.

Then again, it seems possible that Trump may have fabricated the claim, based on comments made at the same time suggesting he has improvised on facts in the past. In the same speech, Trump admitted that he had made up facts about a U.S. trade deficit with Canada during a meeting with Canadian prime minister Justin Trudeau.

According to the federal government's Office of the United States Trade Representative, the United States actually has a significant trade surplus with its neighbor to the north; the U.S.A. exported $12.5 billion more goods and services to Canada than it received in 2018.