How Will a Guilty Volkswagen Be Punished?

Legal experts reveal to The Drive what might tip the scales of justice. 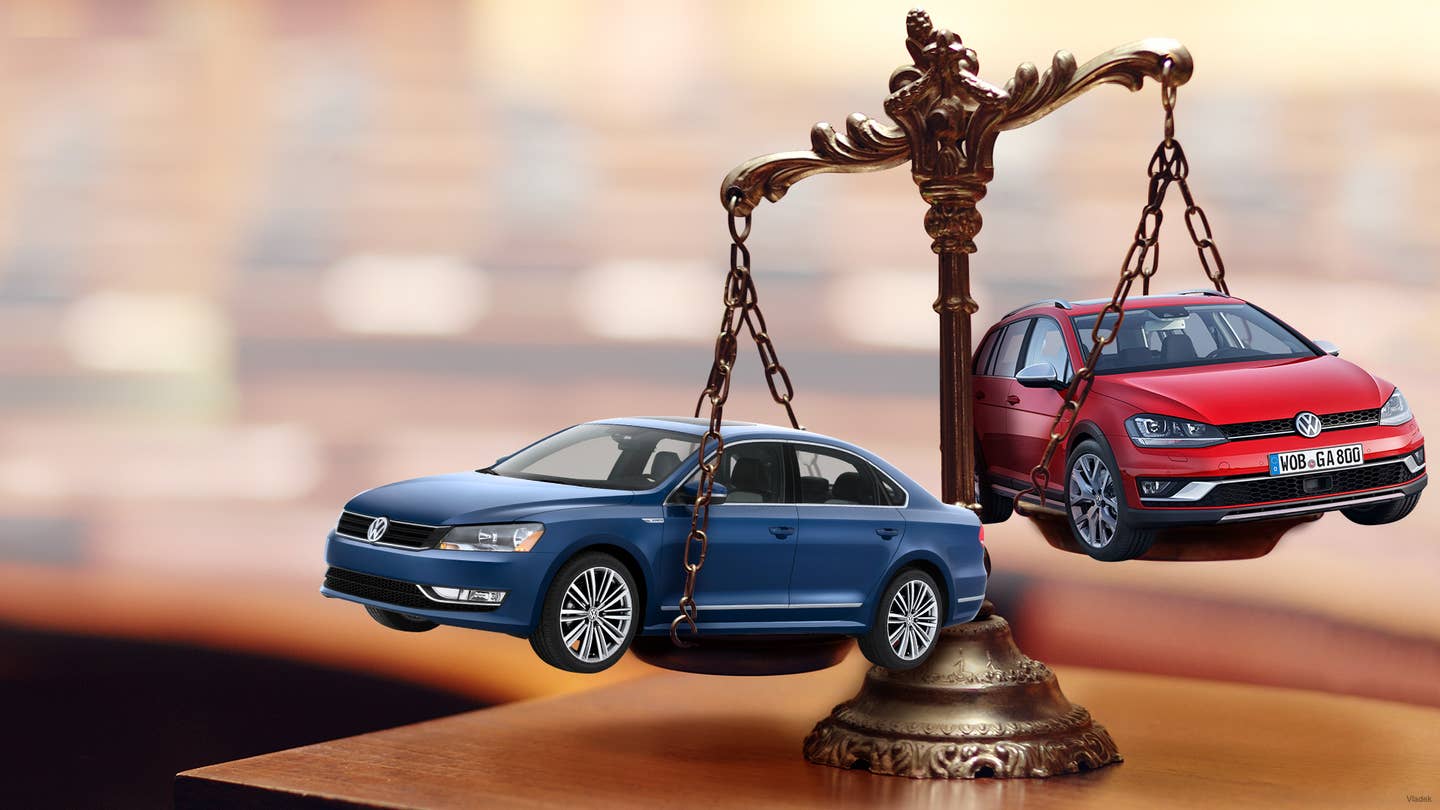 The entire global economy is valued at $78 trillion. The civil suit that the Department of Justice lodged against Volkswagen on behalf of the EPA earlier this month seeks maximum penalties already in the double-digit trillions, and growing. It's increased by $173,400,000,000 since we last wrote about it, more than the GDP of Kuwait. We don’t know where the ceiling is, but it's already an impossible number.

How high could the actual fine against Volkswagen be once the wrangling stops? We can't know. More importantly, one could argue that it doesn’t really matter.

What, then, is the point of the enormous, non-binding penalties laid out in the Code of Federal Regulations?

“The practical aim of imposing a large fine tends to become ‘sending a message,’” said Gregory C. Keating, Vice Dean for Academic and Faculty Affairs at the University of Southern California Gould School of Law. And that message “is partly about satisfying an indignant public and partly about trying to induce VW and other companies to change their corporate cultures.”

A hypothetical multitrillion-dollar fine encourages VW to get this fiasco shut down and agree to a realistic fine that makes a statement. However, the DOJ probably isn’t out to punish thousands of innocents for the crimes of a few, even if those few turn out to be high-level execs.

“It’s pretty clear that big fines impose real costs on people who are innocent of significant responsibility for the wrongdoing involved,” Keating said. “Punishing them heavily... is troubling.”

That plea—“Think of the workers!”—could be in VW’s arsenal in or out of court. A companion plea could be, ironically, “Think of us!”

Sean Hecht is a professor of environmental law at the UCLA School of Law, and the Co-Exec Director of the Emmet Institute on Climate Change and Environment. Before that he worked in the California Attorney General’s Office doing environmental enforcement.

“Demonstrating that a higher penalty at some point might be counterproductive for VW to be environmentally compliant and successfully run its business is a very common tactic,” said Hecht, “and sometimes a successful one, and sometimes it’s even truthful.”

Yet the automaker has little reason to want to test it before a judge, having already admitted wrongdoing. That gives it little cover in a civil suit, with its lower legal burden than criminal cases.

“I see no real legal defense to VW corporate liability here, from what I know,” said David Dana, a law professor at Northwestern University School of Law. “Corporate liability is essential strict liability, and… here it is clear that corporate agents knew they were acting to subvert legal requirements.”

Besides, as far as the DOJ is concerned the final fine might not be the key aspect of the resolution.

“The government will be trying to get things besides the money,” said Hecht, “like a set of promises from VW that end up being enforceable and that hopefully ensure that it doesn’t happen again, which might be a better result than they’d get through a court judgment.”

“A civil fine is just a twinkling star in VW’s galaxy of hurt.”

Those promises are the real prize: the binding consent decree enumerating the full terms of the settlement. This is where meaty costs arise. In that Toyota case, the carmaker spent $20 million to upgrade thousands of public buses with equipment to make them run cleaner, and another $11 million upgrading its own cars to stricter EPA standards ahead of schedule. Beyond Hyundai-Kia's $100 million fine, they forfeited $200 million in federal emissions credits and spent $50 million to upgrade their in-house compliance.

“There can be public scrutiny of the settlement before it's approved, judges can ask hard questions about the fairness of the settlement,” said Hecht, “and the consent decree is binding in the sense that there will be very severe penalties to Volkswagen if it were violated. It provides leverage for the government to extract promises from Volkswagen about future transparency and future actions.”

Those future actions are the changes in corporate culture that help the government and the public, and bring up another issue that will be a central issue during the years this plays out: self-certification.

The EPA doesn’t have the resources to test every car sold, so automakers test their own vehicles and report the findings to the EPA. Letting the industry police itself is a factor in the recurrence of violations.

Stacey Geis, a former federal prosecutor now with Earthjustice, said that the EPA “needs to be more diligent about monitoring such compliance reports and doing the necessary due diligence to ensure that what the company says it is doing through a compliance report… is actually what is happening on the ground.”

The EPA knows it. So does the director of the National Highway Traffic Safety Administration, who said when the scandal broke, "We're questioning everything now." And so does Europe, having a bureaucratic fit right now trying to agree on the next set of regulations and testing protocol. All of which is to say VW is inspiring legislation that will make things harder and more expensive for all automakers, and perhaps consumers, for years.

Then there are the company’s other battles. The DOJ civil suit is expected to be transferred to Northern California, where more than 400 individual customer lawsuits are gathering class-action status. Shareholders filed a $45-billion lawsuit asserting gross negligence. German investigators already have initiated one criminal proceeding, with others possible, and criminal action is expected here. Forty-eight U.S. states are investigating the company in order to bring civil and/or criminal charges; California and Texas are each performing separate investigations. On Jan. 12 the California Air Resources Board rejected VW’s proposed fix for the affected 2-liter diesels, delaying VW's ability to address what is arguably the easiest problem in all of this.

All of this makes the civil fine just a twinkling star in Volkswagen's galaxy of hurt. But that doesn’t mean it will be insignificant.

"This case involves huge, flagrant violations of the Clean Air Act," said Northwestern's Dana, "and these violations presumably saved VW a great deal of money in compliance costs. All that would argue for a large penalty."

Still, what's most important about that penalty is this: It is little more than the amuse-bouche.