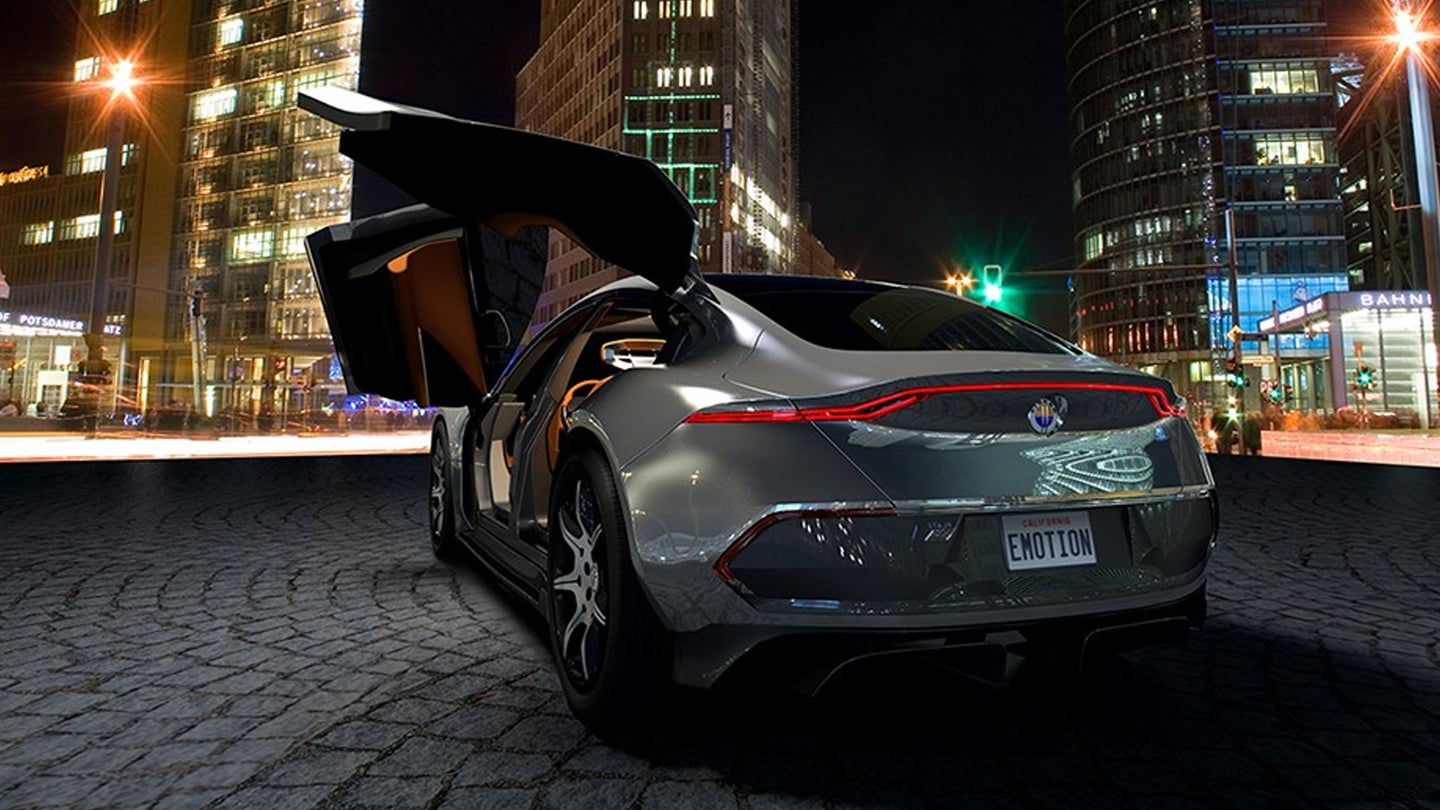 Despite being around for some time, Fisker isn't the name that pops up when someone mentions "luxury electric car." The sales of their hybrid Fisker Karma broke no records, perhaps because it was a luxury car with a GM-based 2.0-liter turbocharged power plant, or because of a 20 kWh battery that provided 32 miles of electric range. Before production of the Karma shut down, around 1,600 units were sold under the Fisker brand, though you can buy basically the same thing with a new badge.

This time around, Fisker is focusing not just on luxury, but on efficiency as well.

After filing for bankruptcy and selling off the rights to the Karma, Fisker reopened doors under the name Fisker, Inc., and began production on a new vehicle. Later, it opened a battery tech division called Fisker Nanotech. The goal: develop a long-range, fully electric, luxury vehicle.

Instead of batteries, the EMotion will be using supercapacitors to store energy and provide a charge to the electric motors. A supercapacitor, unlike a lithium-ion battery, can charge in just seconds, has an exponentially higher cycle life, and can store tremendous amounts of power. The claimed result is a total range of over 400 miles, a figure that puts Tesla's Model S to shame by offering 65 additional miles than its highest-range P100 variant.

In addition to efficiency, Fisker didn't skimp out on the power or styling. The 400-horsepower electric vehicle will skyrocket to a reported 161 miles-per-hour and look good while doing it. In a press release, Fisker revealed some details regarding the stylish features of the upcoming automobile:

The EMotion seamlessly combines technology into the design of the vehicle. The front end’s bright aluminum centerpiece houses a LIDAR system behind a tinted screen. Side mirrors conceal two cameras, which enable panoramic, 360-degree views to the driver.

The world of racing inspired some of the EMotions more daring elements. Extreme aerodynamics include frontal, side, and rear carbon aero elements, as well as a low hood line surrounded by sculptural front fenders and a tapered green house with large sculptural rear fenders. The side DLO (Daylight Opening) is finished with a signature EMotion double-polished aluminum window molding. The rear end has a dramatic section with thin taillights, and an integrated lower carbon diffuser.

The EMotion has been teased before, but no full body shots have been made available before its projected August reveal. The 2019 Fisker EMotion is expected to be revealed in August and released in late 2018 for a starting price of $129.900. Preorders begin June 30th.