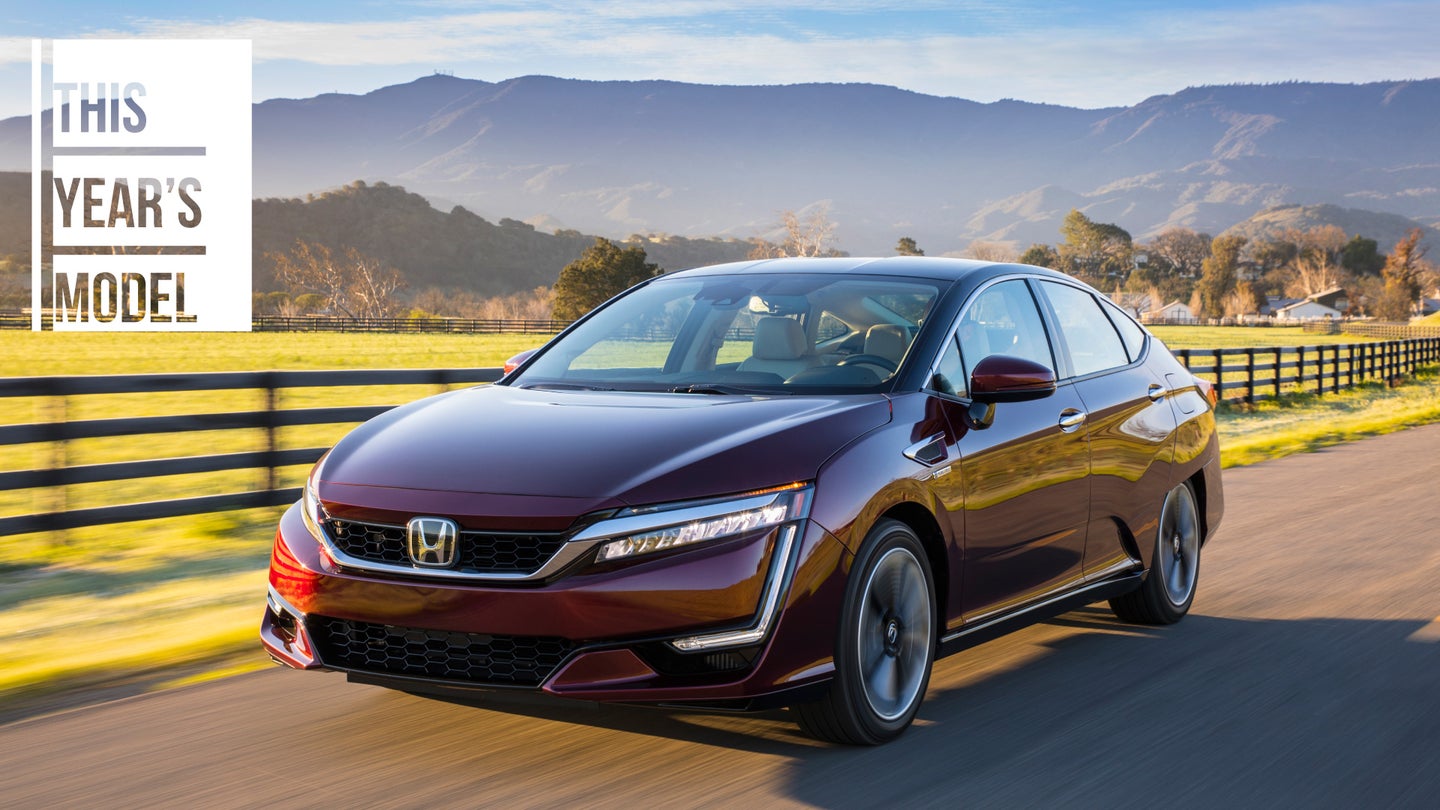 Hydrogen fuel cell cars have been like the Tooth Fairy: A nice story, told and sold to the gullible. Then you meet the Tooth Fairy in person—in this case, the 2018 Honda Clarity—and you think to yourself, maybe this technology isn’t so mythical after all.

For now, let’s set aside the sticky question of where you’re supposed to get hydrogen. Judged on its merits, as simply a car, the Clarity struck me as the best fuel-cell vehicle yet. That includes 366 miles of driving range, more than any pure EV in the world today, and speedy hydrogen gas fill-ups in three to five minutes. While the Tesla owner twiddles his thumbs, spending 30 minutes to several hours to recharge a bulky battery, the Clarity owner is grabbing a coffee and back on the road. If you’re not convinced, and you happen to live in California, perhaps $15,000 in free, Honda-supplied hydrogen will literally fuel your interest. That largesse is part of a three-year Clarity lease at $369 a month with a 20,000-mile annual allowance. California throws in a $5,000 rebate—that’s more than a year of lease payments—and Honda provides 21 days of luxury-car rentals for when owners need to travel outside a convenient fueling zone. (Honda has put about 100 Clarity’s in consumers’ driveways, with about 100 more on a waiting list). To spread out development costs, Honda will soon offer two Clarity offshoots priced in the mid-$30,000 range, one a plug-in hybrid and the other a pure battery EV, the latter with a stingy 80-mile range.

Tested in New York, Sold Only in California

Bystanders peppered me with questions about the Clarity outside the Ink48 Hotel in Manhattan, where I tested the Honda in conjunction with the New York International Auto Show. Like its predecessor, the FCX Clarity, this sedan’s bulbous, science-geek styling (check out those wind-cheating “air curtains” above the rear wheels) strongly implies its alternative-energy tech. The front end is more copacetic, with its RoboCop slits for headlamps and tracers of LEDs.

Like other fuel-cell electric vehicles, or FCEV’s, the Clarity generates electricity via a chemical reaction between onboard hydrogen and oxygen in the air. There’s no tailpipe pollution, and water is the sole byproduct. Proponents continue to insist that hydrogen has the greatest long-term potential to solve the Big Questions in energy and the environment, including what Honda calls society’s “real and immediate” need for dramatic reductions in greenhouse gas emissions. Honda and Toyota are among companies convinced that, once the world outlaws or shuns the burning of fossil fuels, hydrogen will become a critical clean-energy source. A new Hydrogen Council, announced at the World Economic Forum in Davos, Switzerland—whose members include Honda, Toyota, Hyundai, BMW, Fiat Chrysler and energy giants Royal Dutch Shell and TotalSA—are placing a $10.7 billion bet on hydrogen projects.

Honda finished its first experimental FCEV, an Odyssey minivan whose fuel stack took up so much space that barely one person could fit aboard, in 1998. They’ve come a long way since Saving Private Ryan was in theaters: The new model packs an entire hydrogen powertrain—including fuel cell, electric drive motor, hydrogen/air supplies and single-speed direct gearbox—into a smaller underhood space than Honda’s 3.5-liter V6. That fuel cell is 30 percent more compact than Honda’s FCX Clarity from 2008, including 33 percent fewer cells. Yet its power density by volume grows by 60 percent, and the stack is four times as resistant to impacts.

Stephen Ellis, fuel cell marketing manager for Honda's American division, says the new stack puts out “more than 100 kilowatts from a box the size of a desktop computer.”

An output of 3.1 kilowatts per liter of displacement is a record for production fuel cell cars. That powerplant drives an electric motor to the tune of 174 horsepower and 221 pound-feet of torque, up a respective 30 and 17 percent, at a peak 13,000 rpm. A modest lithium-ion battery slides below the cabin floor, at roughly the 7.4 kilowatt-hour scale of the Honda Accord Hybrid.

A pair of hydrogen tanks below and behind the passenger seat hold 5.5 kilograms of hydrogen at 10,000 psi, twice the pressure of the previous Clarity. So though the volume per tank has shrunk to save space, the new Clarity packs in 39 percent more fuel. Those tanks are robustly engineered to prevent leaks, but also to detect and stop them if they ever occur. The upshot is that EPA-rated range of 366 miles, 50 percent farther than the old model, with economy of 68 mpge in combined driving.

Aimed uphill on Manhattan’s West Side Highway, the Clarity supplies a useful shove of electric torque. Honda hasn’t released acceleration figures, but I’d guess the Clarity cracks 60 mph in less than 9 seconds. On the winding Taconic Parkway, the Clarity easily dispatches dawdlers and surges to nearly its 103-mph limited top speed. And the new-gen Clarity now seems as quiet as any EV. Ellis credits a less-noisy electric turbocharger, versus the former Roots-type blower, for the air supply.

The interior recalls an Accord, spacious and shipshape, if a bit monochrome. Funkier touches include faux Alcantara and ebony wood and a floating center console that houses pushbutton transmission controls. Honda’s somewhat kludgy Direct Audio infotainment screen is onboard; along with familiar Honda safety features including camera-based Lane Watch. Electric steering is lighter than meringue, but the Clarity is perfectly suited to family duty. And squeezing the brakes offers a pleasant surprise. The Honda’s regenerative stoppers are among the most natural-feeling I’ve experienced, with good initial bite and virtually none of the spongy or artificial sensations that hamper so many EVs and hybrids.

“We’ve been working on that since the EV Plus of 1997,” Ellis says with pride, including a braking algorithm that adapts to road conditions.

A Sport mode boosts the level of regenerative energy returned to the battery. Yet Honda avoided the aggressive regeneration, typical of “one-pedal driving” EV’s, in which stepping off the throttle sharply decelerates the vehicle in golf-cart fashion.

“Electrons aren’t as sacred” in a fuel-cell vehicle, Ellis says, in contrast with EV’s that work to scavenge every scrap of energy to preserve driving range.

Bottom line, the Clarity shows Honda engineering at its wonky best. What remains unclear is the hydrogen itself. It’s been a classic chicken-and-egg quandary: Automakers are leery of developing cars with no hydrogen stations to serve them, and energy companies and investors are unwilling to build an infrastructure to produce, store, transport, and pump hydrogen at a consumer level without the cars. Yet the tech's backers dispute the conventional wisdom that producing hydrogen and its infrastructure is too complicated or expensive to gain traction.

California, Europe, and Japan are planting the seeds. California hopes to put up $20 million a year to have at least 100 hydrogen stations in operation by 2023, most in the Los Angeles and Bay Areas. A chunk of those will be True Zero stations, owned by First Element, a company headed by former GM and Hyundai marketing executive Joel Ewanick. Honda and Toyota have kicked in nearly $14 million in loans for 19 stations, with the California Energy Commission providing $27.6 million in grants.

At the risk of sounding sexist, Ellis says, hydrogen stations “have to pass the wife test.” By Honda’s count, 26 California stations pass that test, with several more scheduled to open this year.

Hydrogen’s lofty price is another sticking point. Drivers pay roughly $10 to $16 for a kilogram of hydrogen that contains virtually the same energy as a gallon of gasoline, enough to propel the Clarity for 68 miles. Ellis sees reason for optimism: Hydrogen for large-scale industrial customers already achieves price parity with gasoline, he says. For consumers, UC Davis’ analysis shows that hydrogen could achieve price parity with EV chargers with as few as 100 hydrogen stations clustered to serve about 50,000 FCEV's. Compared with electricity, station investors and consumers would benefit from hydrogen’s exponentially faster refueling times. A hydrogen station with a 1,000 kilogram capacity and four pumps could serve several hundred paying customers a day, compared with a relative handful of EV’s at charging stations, even the DC variety that juice up cars in 30 to 45 minutes. And far-more-common Level 2 EV chargers, which take several hours to do their thing, might seem laughably inefficient versus a four-minute hydrogen fill-up.

The green benefits are evident. FCEV's, whose powerplants waste far less energy than internal-combustion vehicles, generate half the carbon-dioxide emissions—even when their hydrogen is sourced from America's cheap-and-abundant natural gas, according to the Institute of of Transportation Studies at the University of California Davis. Those climate-change benefits explode if hydrogen is sourced from renewable hydroelectric, wind, solar or geothermal energy. Energy experts also point to hydrogen's huge potential as a flexible “energy carrier” for low-carbon sources such as wind and solar, allowing them to be efficiently stored and integrated in the overall electric grid.

Yet until very recently, you could round up every FCEV on American roads and not fill up a mall parking lot. Honda built 80 units of its previous FCX Clarity for use around the world. Since 2007, General Motors has logged more than 3 million test miles in a fleet of 118 fuel-cell Equinox SUV’s. Hyundai has leased 140 fuel-cell Tucson SUV’s since June. Toyota has been the volume champ, selling more than 1,400 Mirai hatchbacks since last fall. That Mirai is the first FCEV ever sold at retail in America, yet it, too, is available in just one of 50 states. In contrast, Americans bought more than 160,000 EVs and plug-in hybrids in 2016 alone, up 37 percent from 2015. There are more than 500,000 of those cars on the nation’s roads.

To cut fuel-cell costs and boost production volumes into the tens of thousands, Honda and General Motors have teamed up. They’re targeting 2020 for a successor to the Clarity, using a jointly developed fuel cell. But those automotive giants, and others, had better hurry: They’ve got a lot of catching up to do.