The 2017 Ford Super Duty Is a Stump-Ripping Monster

Ford’s new Super Duty trucks are everything you need, and much, much more. 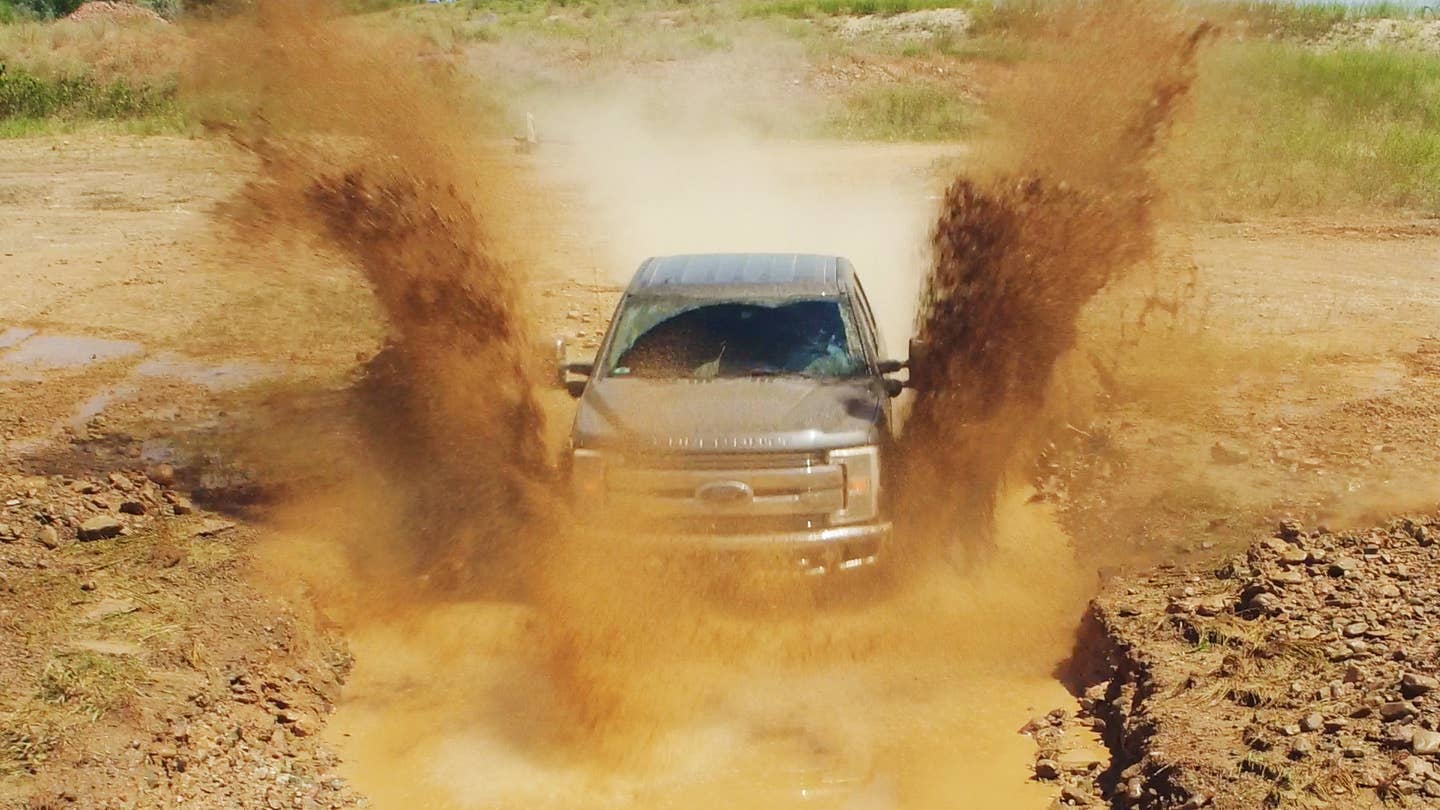 The Colorado Rockies are huge, and so are the grilles on Ford's new line of Super Duty trucks. Perhaps that's why the automaker decided to introduce its new big boy pickups in Denver, at the foot of America's most impressive mountain range.

Of course, the underpinnings beneath all that chrome-wrapped automotive bravado are those of a very capable machine. After spending two days with a range of different Super Duty trucks—spanning the heavy-pickup canon from two-door work truck to crew-cabbed dual rear wheel rigs capable of towing more than 30,000 pounds—it was difficult not to walk away from the display with a feeling that Ford knows what it's doing when it comes to trucks. They sure move plenty of product. Ford has already sold more than 460,000 F-Series trucks this year.

I know what you're thinking: What's there to know about big-ass pickup trucks that hasn't been known for eons? Yes, they're big, and yes, they can carry and/or pull a lot of stuff. And, yes, like all American pickup trucks over the past decade or so, they can be had with refined luxury trim and infotainment gadgets that would put some higher-end sedans to shame. But Ford has managed to stay ahead of the curve, taking its already very successful truck game to the next level.

For starters, all those semi-autonomous safety features that have been making their way into the mainstream car market over the past 10 years have come in really handy where trucks are concerned. Blind spot warning sensors and adaptive cruise control are great to have in a vehicle that takes longer to stop than something much lighter. Stability control in a tall vehicle? Fuggedaboudit. Essential.

Cameras are nothing new, and are available as a solution to an old problem. As we all know, trucks are much larger than their passenger car counterparts, and can be more difficult to see out of—in particular out over increasingly taller, cliff-like front ends, rear tailgates, and rear quarters. Ford has added to the cameras that allow the driver to see what's in front of the truck, behind it, along the sides, and in the bed, creating an available input for trailers that make it possible to actually see behind the trailer. In trucks equipped with the available trailer reverse guidance system, pushing a button on the dash brings up a display on the main stack screen offering different camera angles to view. Working in concert with a trailering assist feature, the driver can follow easy instructions, moving the steering wheel to and fro as prompted and following a set of dotted lines that guide the trailer where it's supposed to go on the screen (and in real life). Slipping up is no problem, as the system has a jackknife warning when the trailer has reached an uncorrectable angle, which directs the driver to pull forward, straighten out the trailer and try again.

For those accustomed to looking at the trailer through good old-fashioned mirrors, relying on video cameras is like trying to make toast with a Sony Playstation controller. That said, the system will probably be a hit with folks who, without the aid of nanny devices, would likely have ended up crashing their new boat into the beer can-filled marina dumpster.

The cameras can also be activated at low speeds when the giant trucks are snaking through relatively tight obstacles. On off-road trails and in cluttered alleys, this is a great feature to have when you would normally proceed with vision-less caution and hope for the best for your truck's shiny, slab-like sides. (Either that, or you just wouldn't drive a huge truck into a tight space.)

Another available feature that allows the driver to do less and the truck to do more is the hill-descent system. At the touch of a button, the driver can sit back, relax and watch as the truck lets itself slowly down a steep hill. Not that many off-roading types would a.) consider a Super Duty as their top choice for an off-road rig or b.) want the truck to do the fun part for them, but in consideration of the off-roading greenhorn who may find him- or herself face-to-face with a very steep unpaved downhill section, hill descent won't make any mistakes. (Goofing up a steep descent sucks if you crash the front of the truck into the flat part at the bottom.)

Adaptive steering is one of the most innovative features available in the new trucks. Using an actuator mounted inside the steering wheel hub, it automatically increases steering input at lower speeds, allowing tighter turns with fewer rotations of the tiller. It may sound insignificant, but given the opportunity to drive trucks with and without the feature, it made the big trucks much more nimble than they would otherwise have been. On a course packed with tight turns, the difference—especially when towing a trailer—was noticeable.

The new Super Duty trucks have a strengthened frame (good news for the towing crowd), and the cab is the same aluminum unit used in Ford's popular F-150 pickups. That means they're available with all the same luxury touches, like electric, automatically-extending running boards (which really help driver and passengers on the long climb up into these tall trucks) and panoramic sunroofs. As with the F-150, Super Duty models all come with a lightweight aluminum cargo box, which is available with locking, moveable load tie-down cleats.

Ford said it responded to customer input about ease of use on driver controls, and made corresponding adjustments to knobs and buttons. As Super Duty trucks are ostensibly aimed at the contractor crowd, controls are large enough to be manipulated while wearing work gloves.

If you're going to tow anything, an engine's torque rating is an important number. Ford offers a very capable 6.2-liter V8 as its base engine in the Super Duty. It's rated at 385 horsepower, cranking out 430 pound feet of torque at 3,800 rpm. Not bad at all—but then there's the 6.7-liter V8 turbodiesel. It's rated at 440 horsepower. Solid, but its torque rating is bonkers. Ready for this? It serves up apoplectic-Incredible-Hulk twisting force—925 pound-feet worth—at a mere 1,800 rpm. I've heard of stump-pulling power, but this thing seems capable of removing the roots of an entire grove of trees in one go.

Of course all of these advances in truckery come at a cost. Back in the late Sixties, technology was very basic, but trucks were still relatively cheap. An unadorned, rear-wheel drive, six-cylinder 1969 F-250—which even today can serve a wide variety of industrial needs—could be had for $2,641, or just over $17,000 in today's money. Good luck finding any full-size pickup for that little money now. Even a fully-loaded V8 four-wheel drive '69 F-250 with a camper package, heavy duty springs and axles, air conditioning, Western-style chrome mirrors, lockable storage boxes and—gasp!—a pushbutton AM radio went for just under $5,000, or about $33,000 in 2016 dollars.

The most basic 2017 F-250, assuming it can be found in a dealership lot partial to more profitable leather-trimmed luxo-trucks, costs $32,535. Granted, even bone stock it comes with a lot more features—anti-lock braking, power steering, air conditioning, cup holders, a standard V8 engine, and much more civilized road manners, among other things—but still, cost is cost. If you go for the top-the-line F-250 (the Platinum version, equipped with the huge sunroof, super-mega-brutish towing package, heated everything, electronic everything and, hopefully, more cupholders) expect to pay closer to $80,000. Eighty grand, for a truck. A lavishly-appointed F-450 can cost upwards of $85,000, although it can tow a small town.

At the end of the day, none of that matters, though. Middle-class Americans have always been able to find a way to buy things they can't really afford, such as $500,000 homes, horses, $50,000 pickup trucks, boats, RVs, and on and on. It's the American way.