This Ducati gets you a lot of motorcycle. Shame it doesn’t also get you mirrors that’ll hold up to actual offroading. 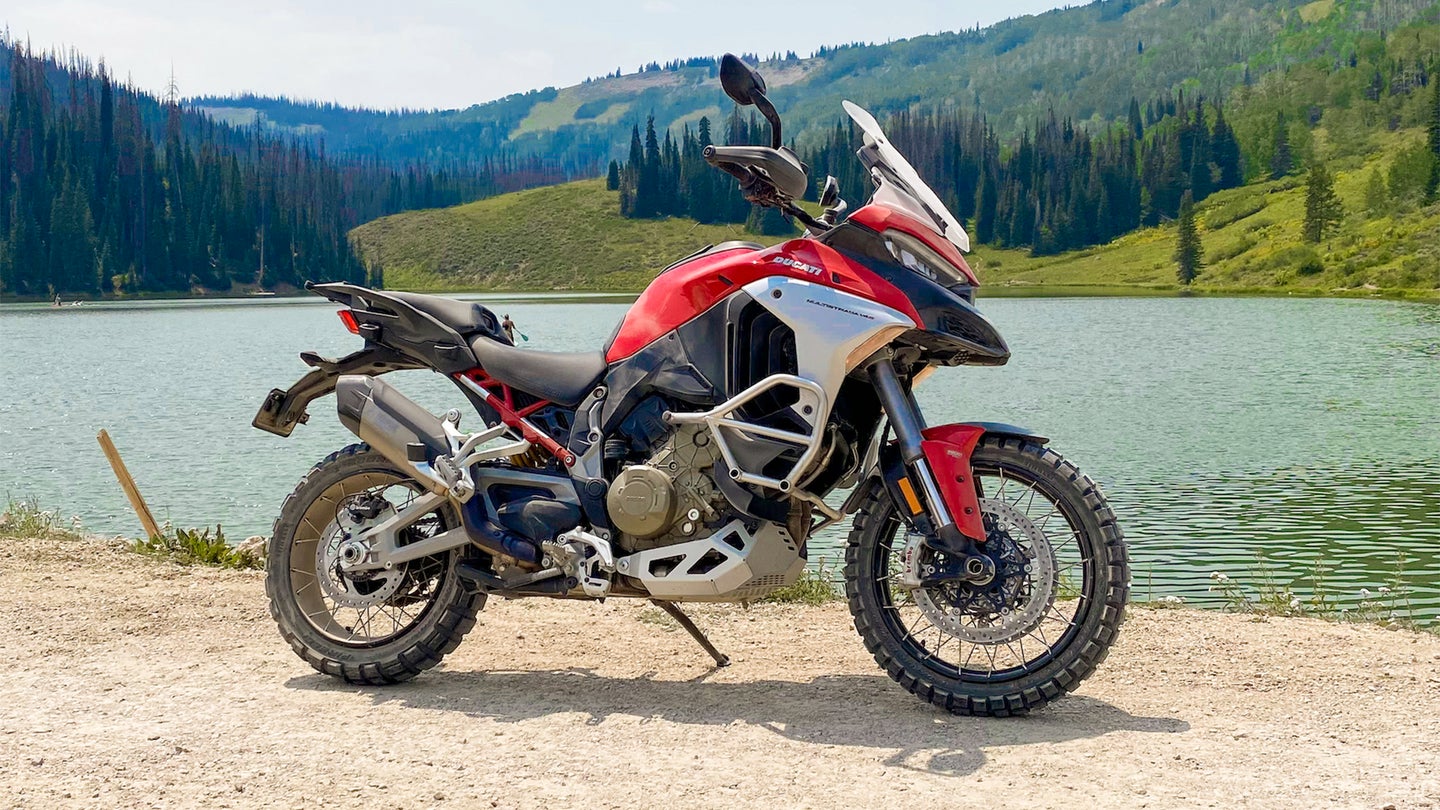 While UTVs of all kinds bespeckle the trails around where I live, most of the riders I’ve seen kicking up dust through the Wasatch-Cache mountain range just use dirtbike-based enduros—think Husqvarna 501, Honda CRFs, Yamahas of all sorts, and Kawasaki’s classic KLR platform. What I haven’t really seen are any actual adventure motorcycles (ADV) blazing the trails. Enter the B-2 Spirit of the ADV segment: the 2021 Ducati Multistrada V4 S.

An absence of ADVs could be for very specific reasons, i.e. a full-size ADV might not be well-suited for such technical trails. Nimbler motorcycles can skip across boulders and run over silty sand without sinking and heaps of horsepower and torque aren’t really necessary. I mean, during my time with the Honda CRF450RX, I wasn’t hurting for more. I did keep asking myself though, “What happens when you bring out the big guns?”

The Multistrada V4 S costs $26,095 and comes with a grocery list of kit, including adaptive cruise-control, semi-active suspension, keyless start, hill-start assist, heated grips and seat, many riding modes, a crash cage, blind-spot monitoring, knobby tires, 170 horsepower and 90 pound-feet of torque, and countless other items that are actually too numerous to list. It also weighs a whopping 529 pounds without me, a 215-pound (ish), 6’4” human meat bag.

So, what’s a motorcycle like that out where only featherweights roam? You know that $26,095 price tag? It’s worth it... apart from its $300 mirrors.

Before I get into those mirrors, let’s talk about its architecture. Every Ducati I’ve ridden with the brand’s new-ish (launched in 2018) V4 platform, whether that’s the Panigale V4 S or the Streetfighter V4 S, has been, in no uncertain terms, fan-fucking-tastic.

These are machines that leave you breathless, wide-eyed, and reenacting Milhouse’s seductive eyebrow gif whenever you look back at them. And the architecture’s excellence is due in large part to Ducati’s MotoGP-derived, 90-degree, liquid-cooled V4 masterpiece.

With some slight modification to the Panigale and Streetfighter’s 1103cc V4, the Multistrada spec (dubbed the V4 Granturismo) is bored out to 1158cc and cranks to a frenetic 11,500 rpm (down from 13,000 rpm) and piped through an Akrapovic exhaust designed for better ground clearance. Detuned to 170 hp and 90 lb-ft of torque from 214 hp and 91 lb-ft specs, it’s coupled to Ducati’s quick-shifting six-speed sequential manual transmission. The drive ratios have been changed compared to the Streetfighter, with the Multistrada getting a shorter first gear for more instantaneous torque and a taller sixth gear for easier high-speed cruising.

There are a few other carryovers but they’re few and far between, though the most obvious place to see such distinctions arrive with the Multistrada’s suspension.

Semi-active Marzocchi shocks adapt to the terrain, your riding style, and use the motorcycle’s pre-programmed riding modes (Sport, Touring, Urban, Enduro, and a user mode for more personalization) to change the suspension’s settings and keep the motorcycle planted. An auto-leveling feature also helps smooth out the ride, even when ruts, rocks, and downed trees enter your path. Halting the big bike’s progress are a set of front and rear Brembos but comes with Bosch and Brembo’s ABS Cornering System.

What this means is that in conjunction with the motorcycle’s ride modes, the cornering ABS will either reduce or increase the ABS engagement to give you the best braking force. Neat.

Two sets of wheels are available, including an alloy set with street/sport tires for touring, and a set of wire rims that can be shod with a set of aggressive Pirelli Scorpion Rally tires, which is how the test bike showed up at my house. There’s also a crash cage wrapped around the Multistrada’s engine to protect it from falls. It also comes with adaptive cruise control and blind-spot monitoring (standard on this top-spec version) which are both motorcycle firsts.

The adaptive cruise-control works between speeds of 20 to 100 mph and like most of today’s cars, trucks, and SUVs, the blind-spot monitoring system is integrated into the motorcycle’s mirrors. But ugh, those mirrors.

Who Decided This Was a Good Idea?

On paper then, it seems like Ducati thought of everything. It has power, poise, and technology to rival a lot of cars, and the brute strength to go from my house to outer Mongolia. Except for those stupid mirrors.

I found this out due to both my own clumsiness and that of my father-in-law’s after I claimed the first mirror just tootling around my property, stalled on a slight incline, and fell over at a whopping one mph. The left mirror snapped nearly in half. And then, a few days later, with the first mirror duct-taped together, my father-in-law attempted to move the Ducati in my garage and dropped it onto the side of my Volvo XC90, breaking the right side mirror.

Neither are really off-road accidents, but the fact that they broke with such ease is just unacceptable for those who off-road on a regular basis. Falls are common, even among the most seasoned of riders, and forking over nearly $150 each time you break a mirror is just insane. A normal motorcycle mirror costs between $30 to $70.

Look, I get it. This is Ducati’s top-tier product, and given everyone’s “need” for tech-this and tech-that, a bunch of super-fancy mirrors are par for the course. But who decided it was a good idea to make them out of plastic on an off-road motorcycle and then have them cost $142.32 each? EACH!

(And yes, I paid for them and installed them myself. It was my screw-up and I wasn’t gonna send it back to Ducati with two duct-taped mirrors.)

Ducati, for its part, does offer more traditional aluminum options but they won’t work with Multistradas equipped with blind-spot monitoring. So despite Ducati’s engineers appearing taking a vacation the day the mirrors were due, the rest of this motorcycle leads the V4 class. It is sublime.

I beat this motorcycle like I was a Pony Express deliveryman who had 1,200 miles to San Francisco and only 24 hours to make it. There were long pavement rides carving my way through mountain roads that’d make Porsche’s engineers exclaim, “Scheiße!” where the Ducati glided from apex to apex more akin to its sport siblings. Even on the knobby tires it felt excellent and leaned hard, an extension of my hips—something that wasn’t happening with the Indian FTR S.

This V4 engine, though, just begs for more revs and throttle. Bouncing off the canyon walls, it howls like a feral animal, something we actually have near our home. Extra-legal speeds arrive without hesitation but with a serious amount of hollering done from within your helmet.

I did initially have one issue and that was the Ducati’s brakes but not their stopping power. Rather, the brake lever is set up for off-roading and there’s a lot of space between the initial pullback and when the pistons actually clamp down on the rotors. For something with so much freaking power, I want that pullback reduced, and, thankfully, you can change the pickup with a simple screw adjustment.

And then there was our off-road tangoing. On trails easy, difficult, and ErzbergRodeo-esque, not a single thing stopped the Ducati. Through the Uinta National Forest, where many of the trails resemble rally special stages, the Multistrada ate the gravel roads. Speed and staying up on its pegs made for stupendously quick riding through the vast high-elevation trails, and I went faster than I’ve ever gone on gravel. The motorcycle just felt so adept, so perfect that I kept pushing and on curvier sections, I slid the tail, powering toward the next corner.

When I swapped high-speed gravel for technical overlanding, the Multistrada was similarly unfazed. Heading into the Wasatch State Park’s trails, the terrain became steep rock crawling, silty sand, and some of the most beautiful mountain valleys this side of Austria or Switzerland. The shorter gearing in the Multistrada made easier work of the head-sized, polished-smooth boulders littering the trails. Here, the longer travel of the brake lever came in handy and kept abrupt stops from bucking me off. And the long travel, semi-active suspension made even the gnarliest sections pretty comfortable.

Midway up the trail, however, are a set of deep sand pits. There’s no going around them and for lightweight dirtbikes, they’re super easy, barely an inconvenience. I had reservations on the big Ducati, though, as weight has a tendency to sink and if you don’t keep the front end up. If it bogs down, you’re gonna go over the handlebars. But I’d come this far, so I did a quick U-turn, got a little more distance between me and the first sandpit, turned again, and gunned it. With my butt hanging as far back toward the rear wheel as possible, and the throttle pinned, I came out the other side without issue.

The same went for the second pit and a fallen tree.

If You Have the Cash, Do It

I spent most of my time with the Ducati exploring the off-road trails that encircle my house and during it all, I didn’t yearn a single time for one of its competitors. Not the KTM 1290 Super Adventure R ($18,599), the Harley-Davidson Pan America ($17,319), or BMW’s ubiquitous R 1250 GS Adventure ($20,195). And as you can see, you can get a motorcycle in this class for a lot less, but they just don’t bring the same giggle-inducing mania and outright performance of the Ducati.

The 2021 Ducati Multistrada V4 S actually shares a lot in common with my Benchmade Adamas pocket knife; it’s a superbly constructed piece of kit. Razor-sharp, built to endure the apocalypse, and backed by a lifetime warranty, the Benchmade is also really expensive. But as I said in my review, it may just be the last pocket knife you ever buy. For motorcycles, and for me at least, that's this Ducati.

Yes, it’s wildly expensive at $26,095. But you get a motorcycle that can conquer anything you or I could ever throw at it and more, seriously, and it’s backed by the company’s 4Ever unlimited mileage, four-year warranty plan to ensure you rack up serious mileage each and every time the moment strikes and you head off to your local state park or Budapest.

Go nuts. The first thing to break won’t be the Ducati. Well, maybe its mirrors. But nothing important.

Got a tip or question for the author? You can reach them here: Jonathon@thedrive.com.

Everything’s peachy until you lean hard.

2022 Honda CRF450RX Review: A Punchy Race Bike You Can Adventure With

Ain’t no mountain high enough for this Honda.