2022 Honda CRF450RX Review: A Punchy Race Bike You Can Adventure With

Ain’t no mountain high enough for this Honda. 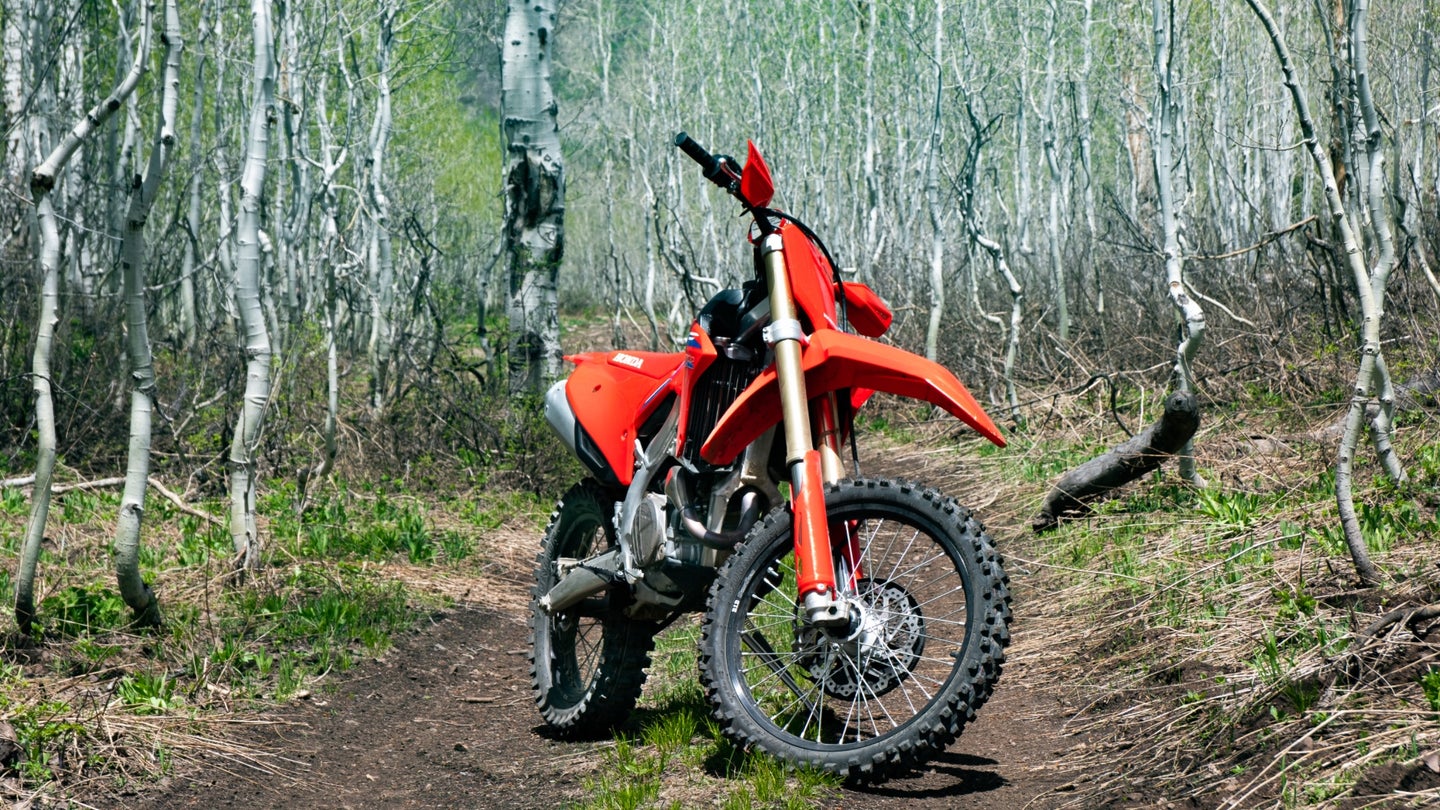 There’s something about getting dirty, kicking up sand and moss, running through aspens (birch for all you non-Utahns), and venturing off into the woods that I find so addictive. I think we all feel called to adventures in the wild after more than a year of lockdowns. And though hikes and long walks are fun, my personal penchant remains firmly in the two-wheel realm with bikes like the 2022 Honda CRF450RX.

Motorcycles offer more freedom to explore the world than just about any other vehicle—sorry, Ford Bronco. There’s no fire-road, OHV trail, city-street curb, or transcontinental path that can stop a good motorcycle, at least not with the right equipment and preparation. And the CRF450RX—the company’s motocross-spec four-stroke, not-road-legal dirt bike—has all the right equipment.

The CRF450RX is meant for blitzing dirt tracks around the country, beating competitors for motocross dominance, and wowing crowds with double-backflips, seat grabs, and other tricks during events like Nitro Circus. Overlanding, exploring, or however you’d describe into the wild riding isn't exactly what Honda envisioned for this motocross badass. That was exactly my vision, though.

Released this year but billed as a '22 model, the CRF450RX saw a few updates from the previous iteration, including new suspension settings for increased usability and deflection off rocks and the occasional tree limb, a forged aluminum side stand, an 18-inch rear wheel, and a sprocket with one more tooth than its CRF450R sibling (50 versus 49). The 449cc engine remains mostly a carryover and keeps its wild low to mid-range torque, though it does get new ECU maps for better balance and more linear power delivery.

Additional credentials for the CRF450RX include an electric start—no kicking needed—Showa adjustable shocks (front and rear) that provide user presets for spring preload, rebound, and compression damping; 12.2 to 12.3 front and rear inches of usable suspension travel; a 38-inch seat height; and a 2.1-gallon fuel tank that I routinely depleted.

I live in Northern Utah with access to some of the world’s best OHV trails that climb thousands of feet through the Wasatch-Uinta Mountains. How could I not take this go-fast dirt bike exploring and see if, even outside its designed use, it could be the ultimate adventure rig?

Before I ventured off into the wilderness, I figured riding around my neighborhood’s pockmarked gravel roads—along with playing within our gravel and dirt yard—would provide a good baseline for comparison. My initial impression? Probably a bunch of giggling.

Weighing just 251 pounds with all the essential fluids—average for the 450 segment—the CRF450RX feels like a feather after riding road bikes for the last year or so. It’s nimble and the knobby Dunlop Geomax AT81 tires make for such easy corner work you’ll wonder if it’s somehow bonded to the dirt below you. All you have to do is lean the CRF450RX itself—this isn’t a road bike—twist the throttle and you’re off hurtling toward the next turn. That forward push, thanks to an incredibly snappy throttle, can only be described as “brisk” in polite company.

Power feels as if it were electric, as wherever you are in the motorcycle’s gearing and rpm range, you have access to all of its 55 horsepower and 35 pound-feet of torque. It’s geared exceptionally well and, along with the Dunlops gripping every scrap of dirt beneath them, made for some hellacious fun when I was running our home’s new dirt bike course—an acre-ish counter-clockwise "track" that goes up one side’s bark embankment, around the garage on gravel, down a valley, up a silt hill/jump, and runs around my kids' playset.

I loaded up the CRF450RX into that 2021 Honda Ridgeline I was also testing at the time and headed toward Wasatch Mountain State Park’s OHV trail. That’s where 12,000-foot climbs, fallen trees, rocks the size of my fists, and views I couldn’t believe awaited.

Though the base of the trail rests at only 6,500 feet above sea level, the air is significantly cooler from the valley below. The trailhead itself is encircled by pines and the range’s towering peaks. Snow still speckled the mountains as I pulled the CRF450RX out of the Ridgeline’s bed, geared up, and began my ride up the mountain’s spine.

This particular trail connects Heber Valley to Salt Lake Valley through 30-plus miles of off-road deliciousness. During the summer months, it’s open to SUVs, trucks, and other overlanders that aren’t hardcore off-roaders, so the beginning of the route is fairly easy to traverse. The gravel is fairly even, there aren’t too many ditches or potholes, switchbacks are plentiful, and the views, even at the lower heights, are spectacular. The start of the off-road trail. Jonathon Klein 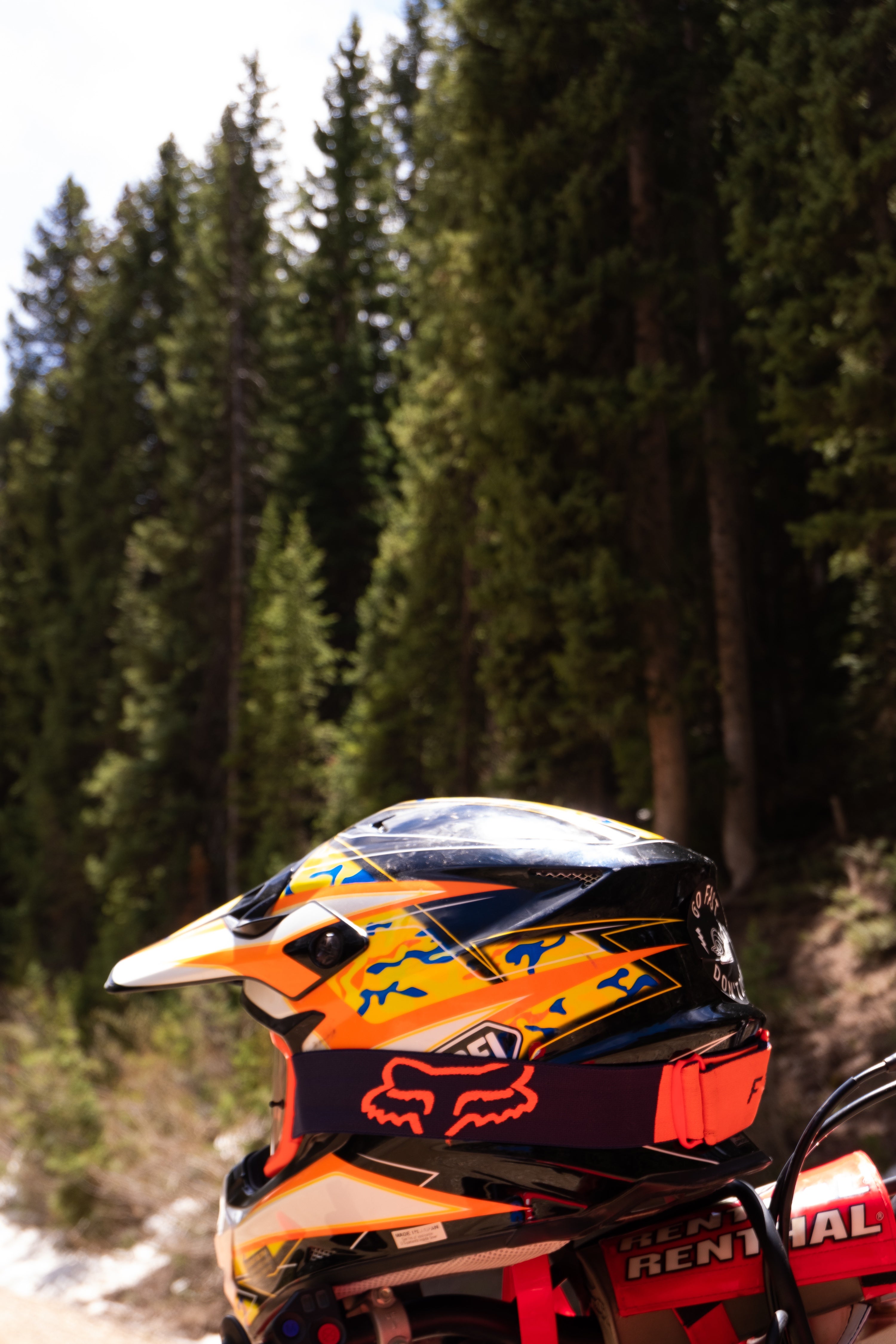 That all changed when I entered the proper part of the trail, something that was closed off to four-wheel vehicles the day I went up. The easy part of the route disappears and gets technical and wickedly fun as the gravel makes way for unevenly laid, fist-sized rocks, fallen branches and trees, large car-swallowing ruts, muddy calf-deep pools, and a bunch of melting snow.

I dealt with the easy section fairly quickly, standing on the CRF450RX’s pegs and sliding through the turns. The engine just wants to blitz everything it encounters and it loves being at wide-open throttle. Showa shocks absorbed all the little whoops without issue, too, and before long, I found myself at the start of the harder portion of the OHV area. Twin gates separate the two sections, with a small opening in the center just wide enough for motorcycles and snowmobiles to head up.

From there, the trail got steeper and steeper, with the rocks, ruts, and debris become more prevalent. I figured it’d become harder for the CRF450RX as I climbed given how oxygen tends to disappear and sap power at elevation, but there was never a point where I felt as if the Honda’s power dipped. Nothing. Not an ounce. Power remained, and I sped through the trail.

Over boulders and through puddles of icy muddy water, the CRF450RX went and I along with it. Nothing stopped us, though two sections gave me pause. Not because they were outside of the Honda’s capabilities, but because I wasn’t sure about my own. Both sections featured still-melting snow, with ruts from braver folks who’d previously ventured into them.

The first section’s snow rut wasn’t too bad and I got through it fairly quickly with some careful consideration and front tire placement. The second, however, was far sketchier, as along the second section, the trail had a slopped edge leading to a 30- to 45-foot, pine-lined drop alongside it. Very carefully, and cheating toward the right and unrutted snow, I slowly went through, making sure I kept my eyes straight and not fixating on the potential tumble. A slight wobble in the rear tire as I clipped some ice was all that occurred.

Well, that and my entire musculature tensing up. 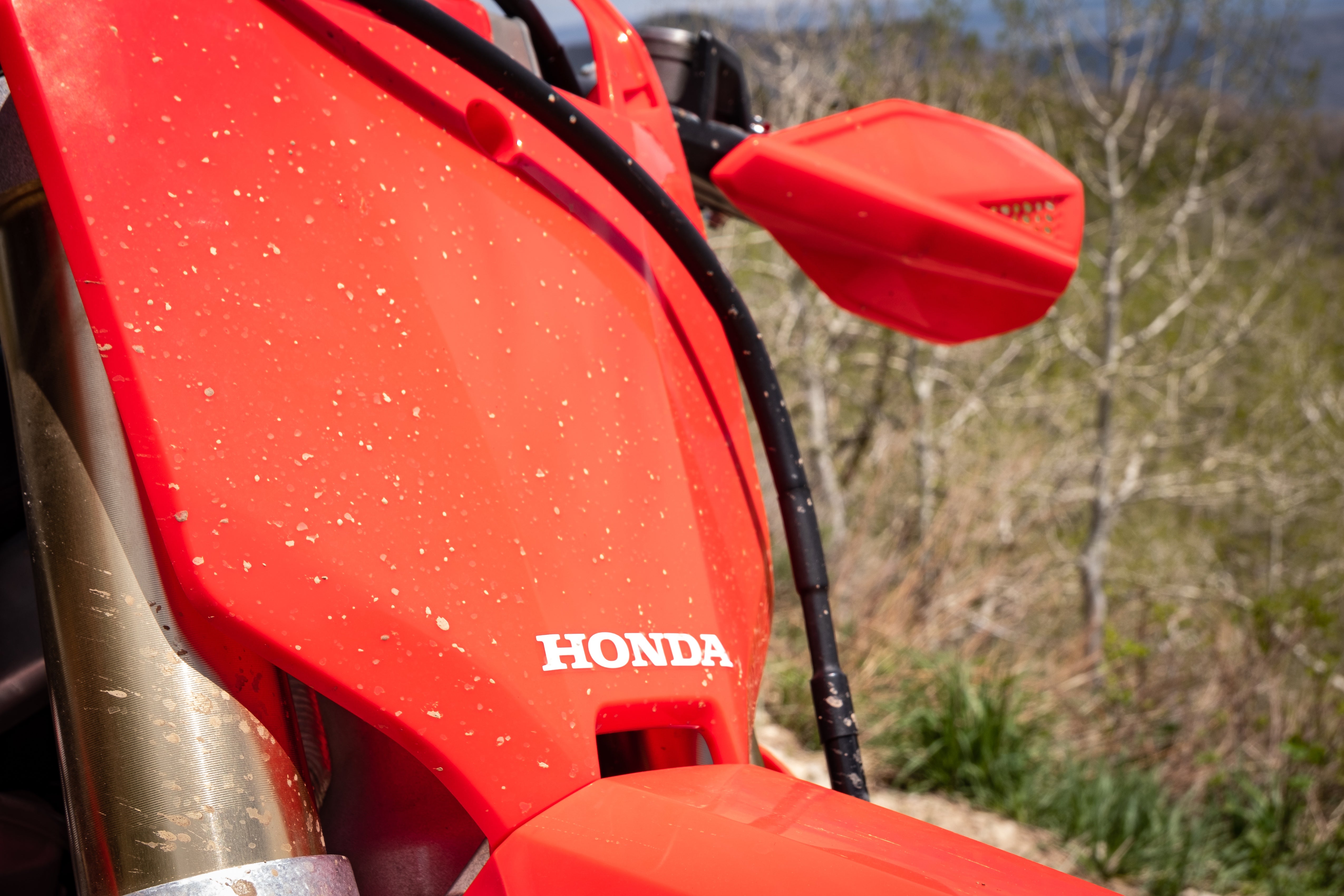 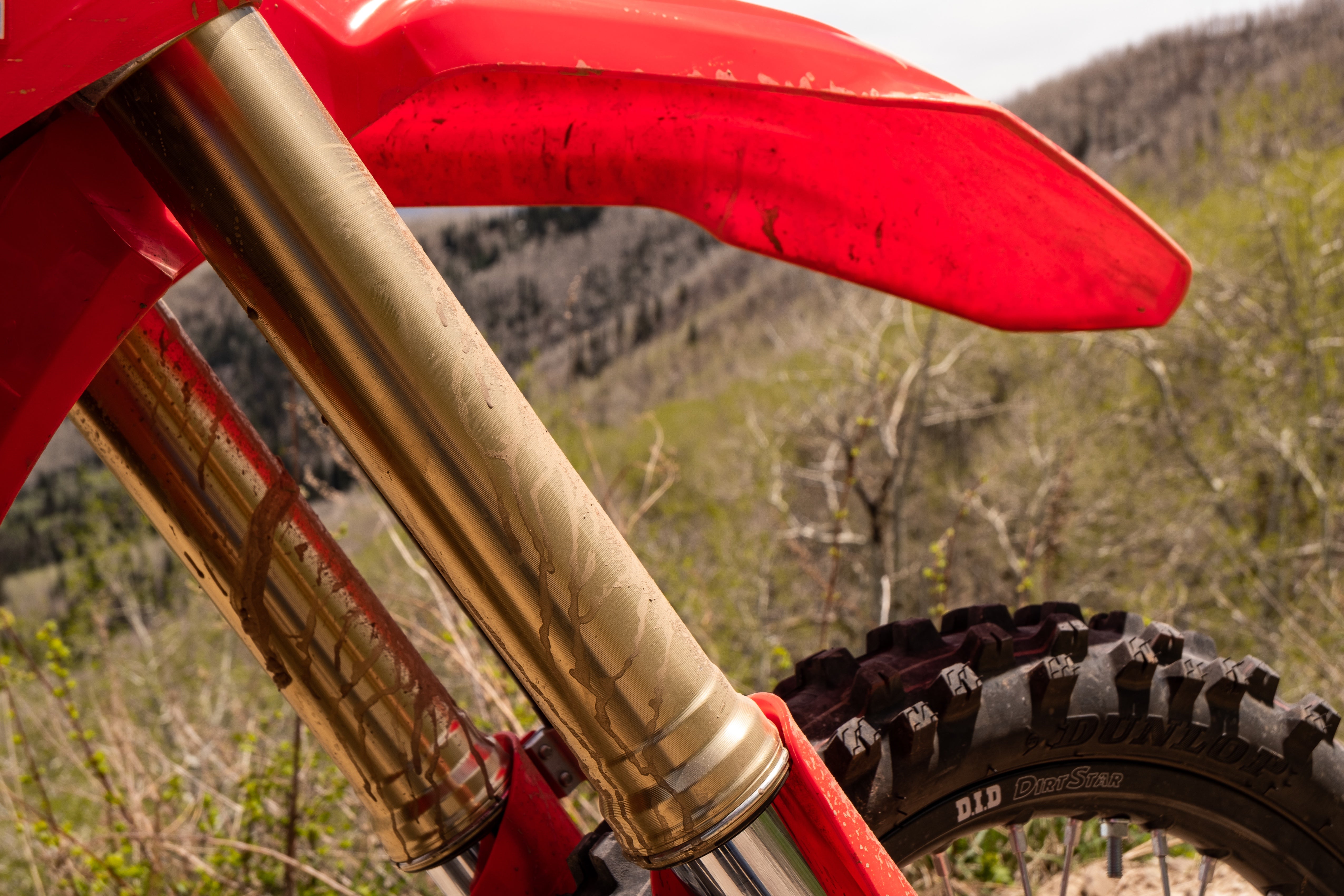 Adventure or Race, It Doesn’t Matter

In today's adventure bike scene, there are many offerings more tooled toward touring the wide-open pavement and little else. Slick tires, heated seats, GPS, radar-freaking-cruise-control, power-limiting traction control, and 1,001 other creature comforts exist to make your ride easier for sure, but the bikes themselves lack the capability to do even the easiest of fire roads. And indeed, getting up here without the CRF450RX's Geomax tires, the Showa shocks and the travel they provide, and that punchy 449cc four-stroke probably wouldn't have been possible for many ADV-lites.

Honda didn’t set out to build the ultimate adventurer, and with its lack of signals and lights, the CRF450RX actually isn’t one. It’s still very much a race-on-Sunday dirt bike. It just so happens that it's absolutely excellent at adventuring, too, but if you wanted something with all its capabilities that also happens to be street-legal, Honda sells that in the CRF450RL for just $100 extra.

Honestly, yeah. When friends have had competitors in their garages, i.e. the Suzuki and Yamaha, they're good, solid, racy dirt bikes, but they're not as approachable or flickable as the Honda. By all means, I'm not an AMA Motocross champion, nor am I entering Red Bull's Erzbergrodeo, but the CRF450RX makes me think I could, given a little more seat time. And while I love a good KTM, they're more expensive to fix. These are bikes meant to be beaten and battered, which means broken parts on the regular. I'd rather scroll through Honda's accessible parts catalog than having to overnight some from Austria.

The CRF450RX carried me away from everything and anything and stuck a grin on me I doubt will ever wipe away. It proved itself on my home course, beguiled me with its agility, and stoked the need to go out and explore my mountains more often. This is a motorcycle you won’t forget and, more importantly, one you won’t want to ever give up. I know I didn’t. Through the looking glass. Jonathon Klein 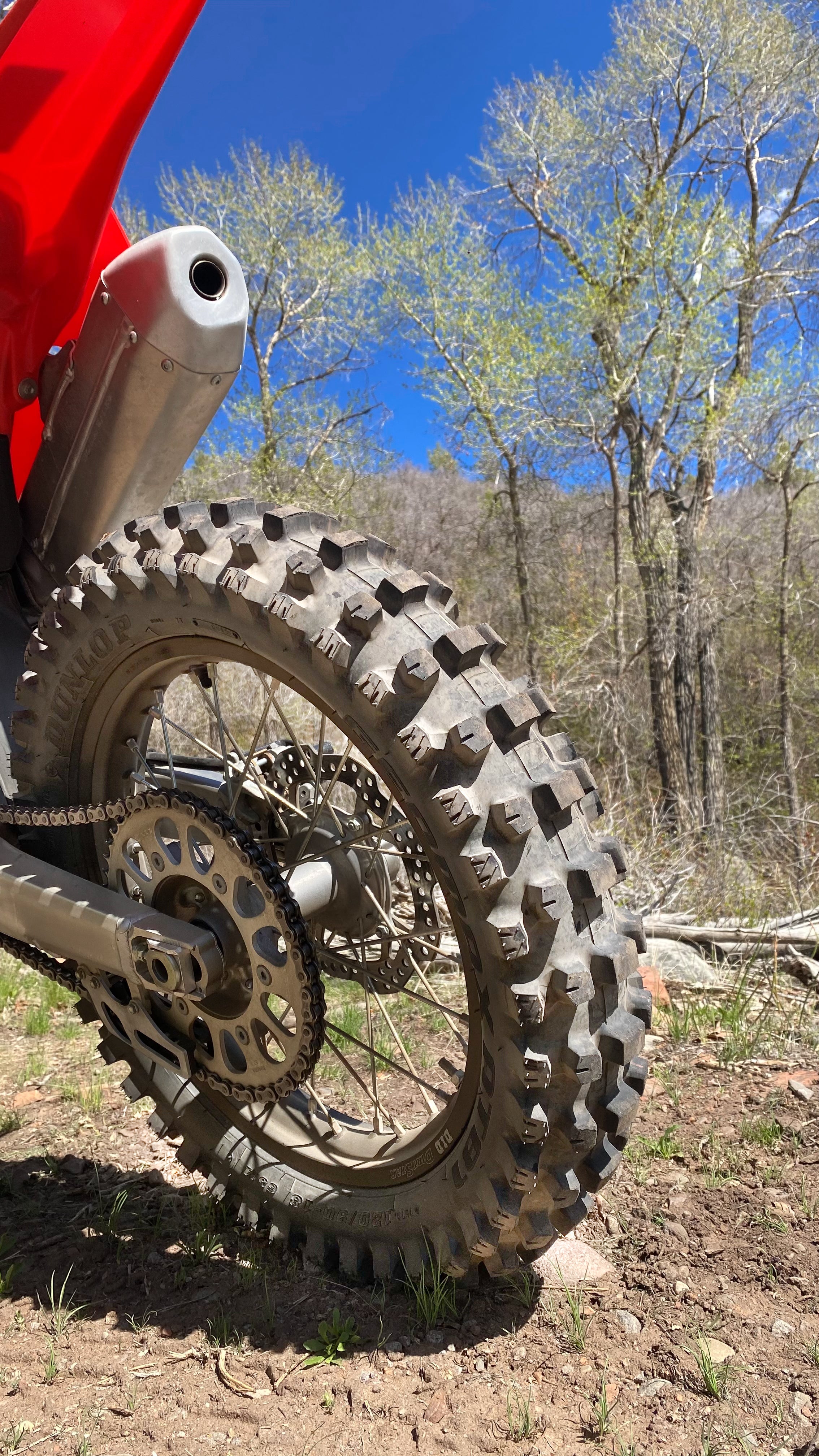 Another shot of these killer tires. Jonathon Klein 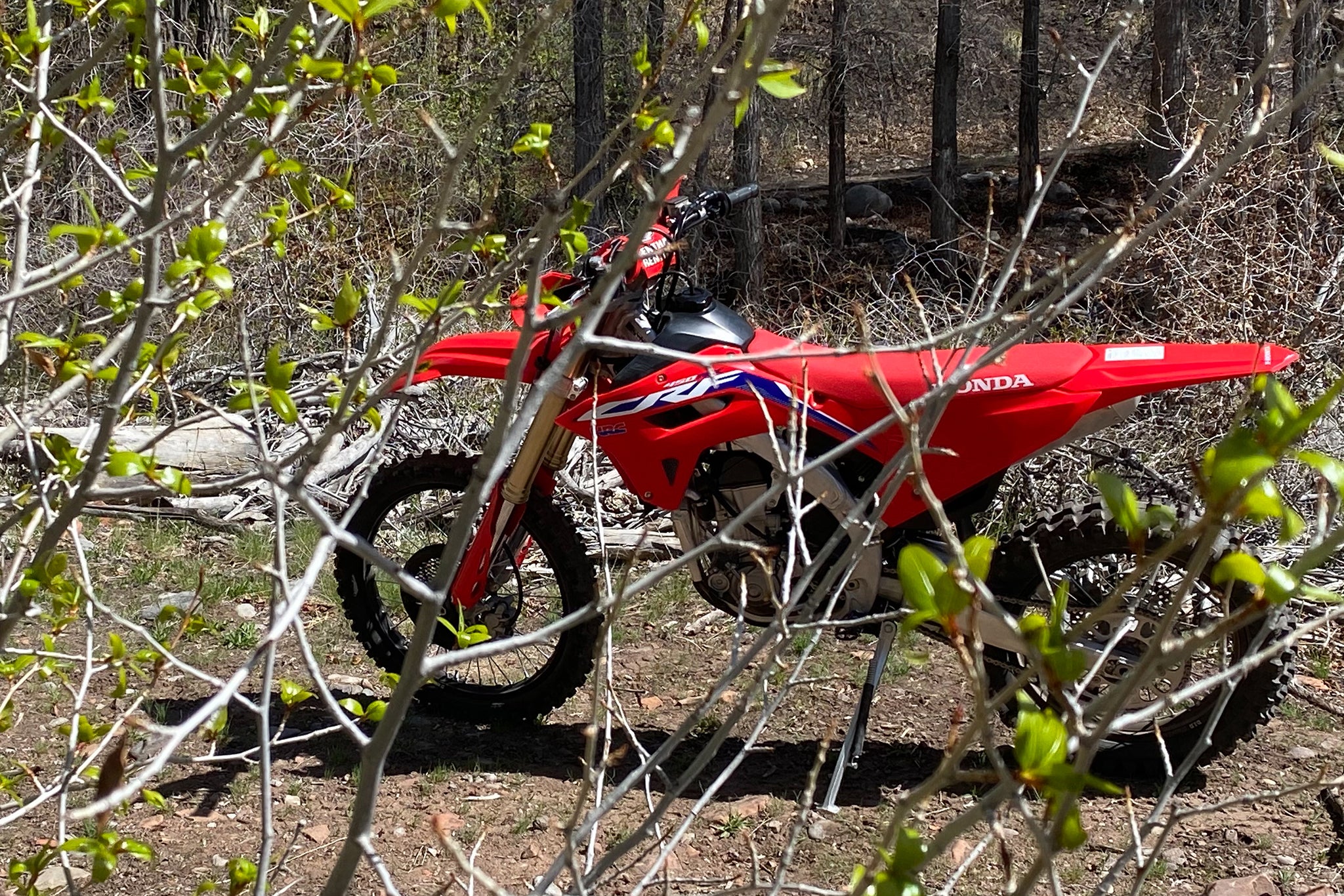 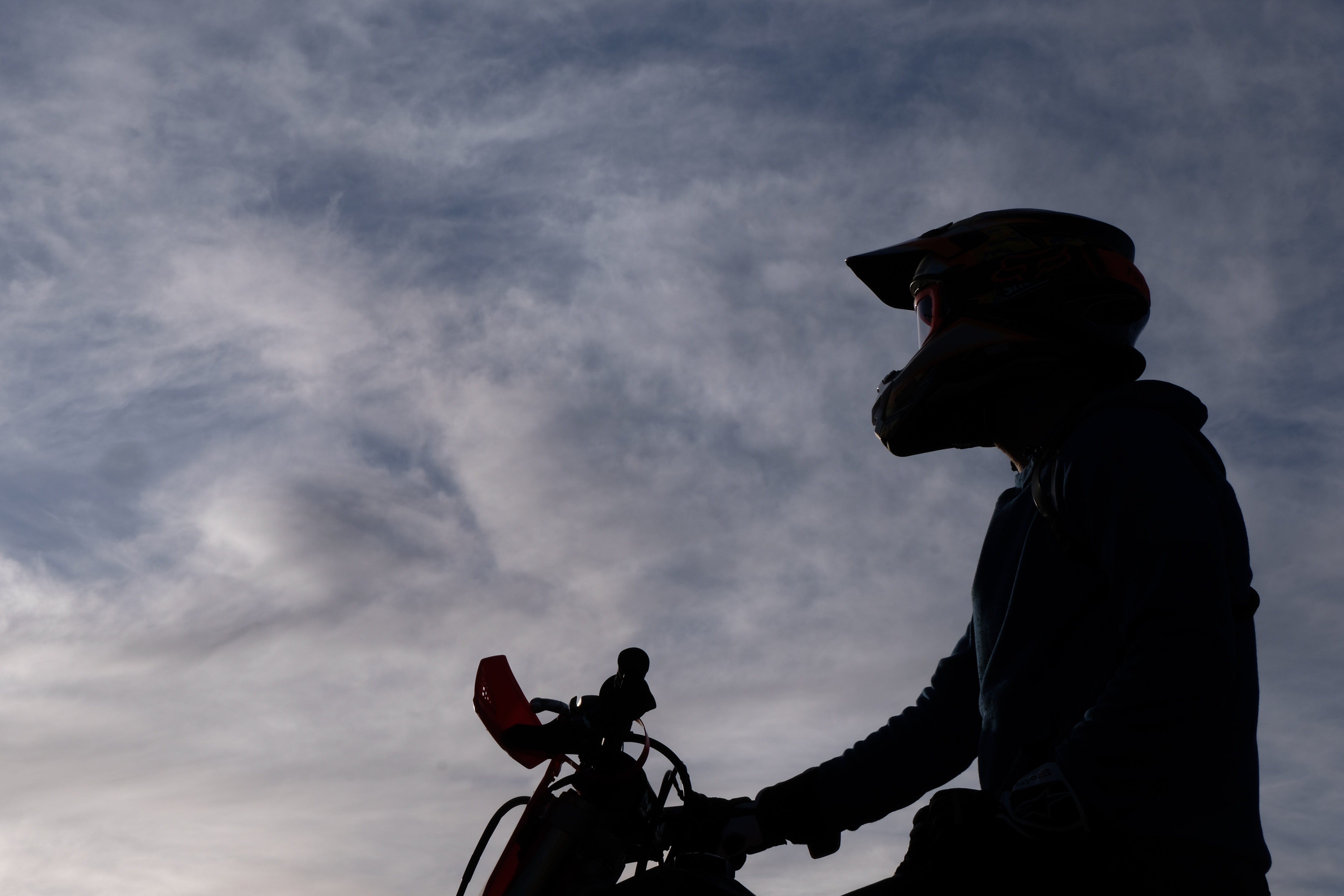 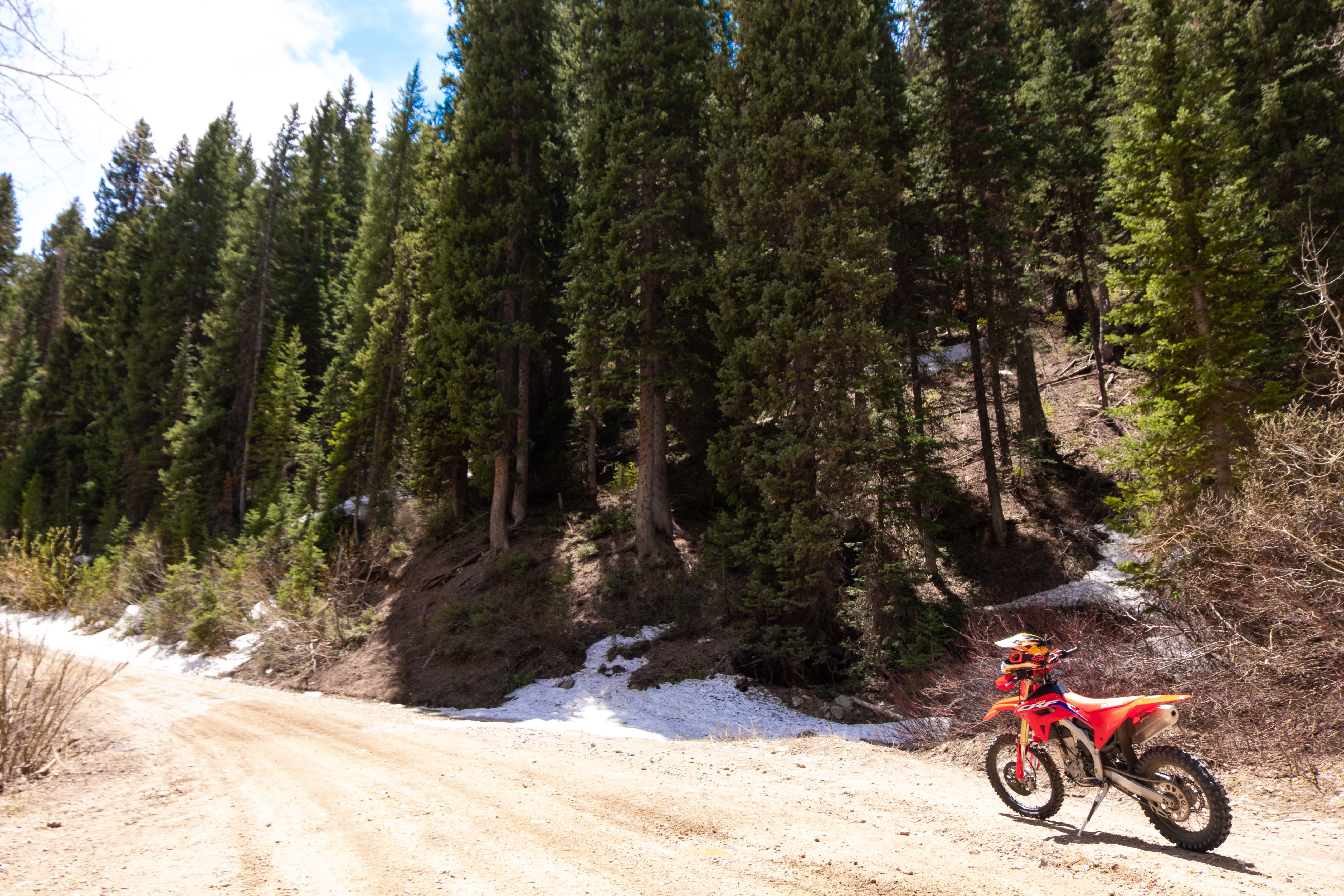 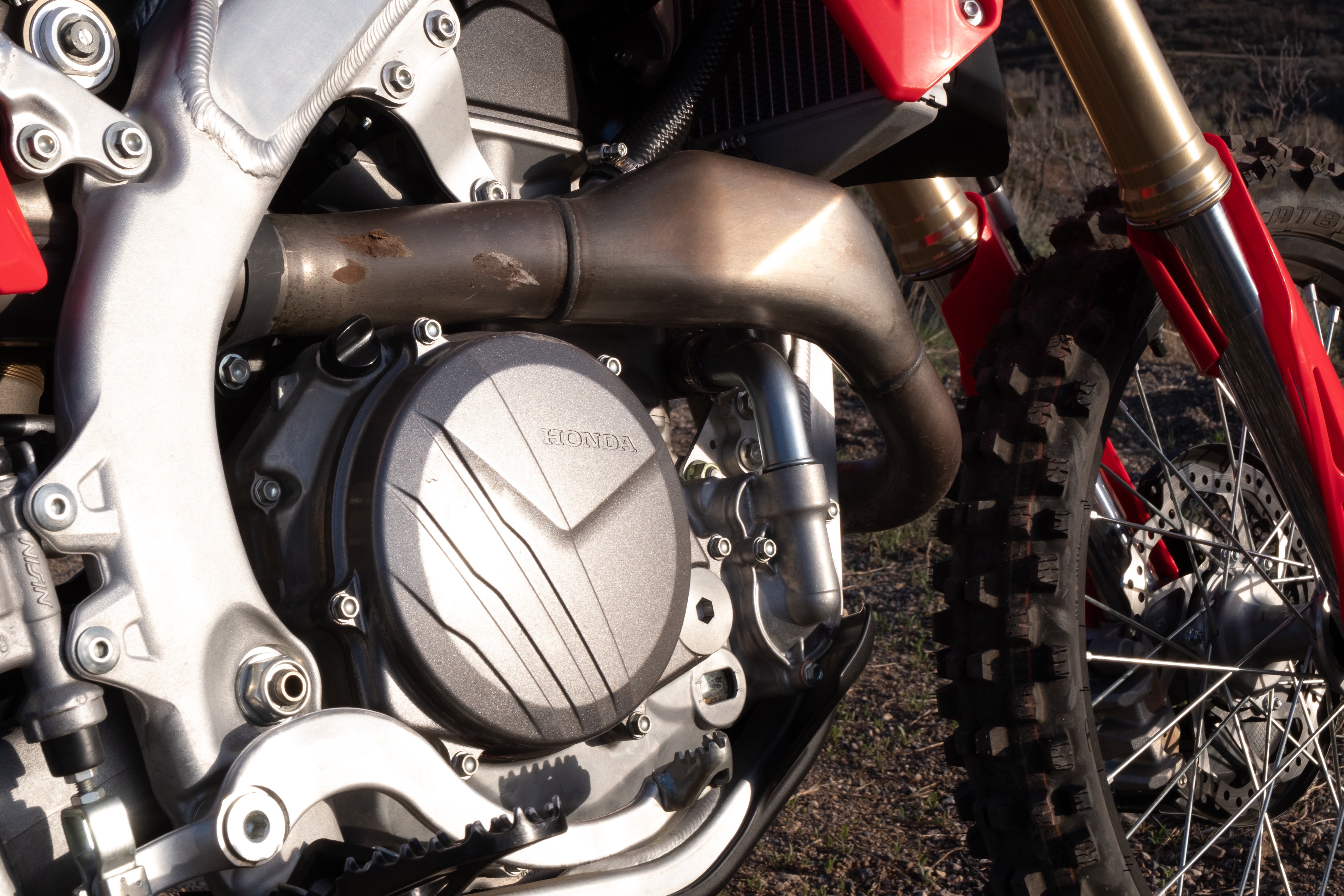 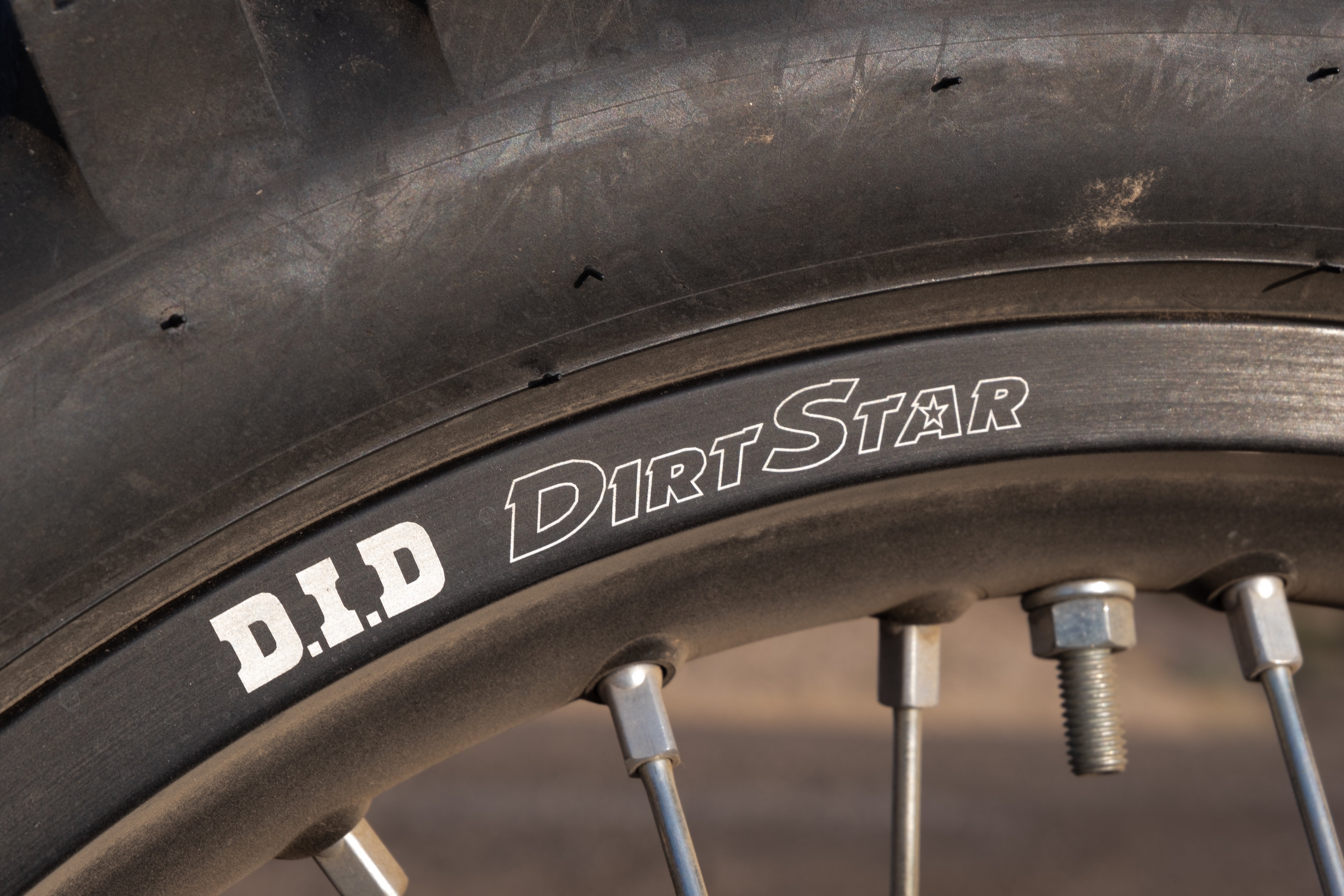 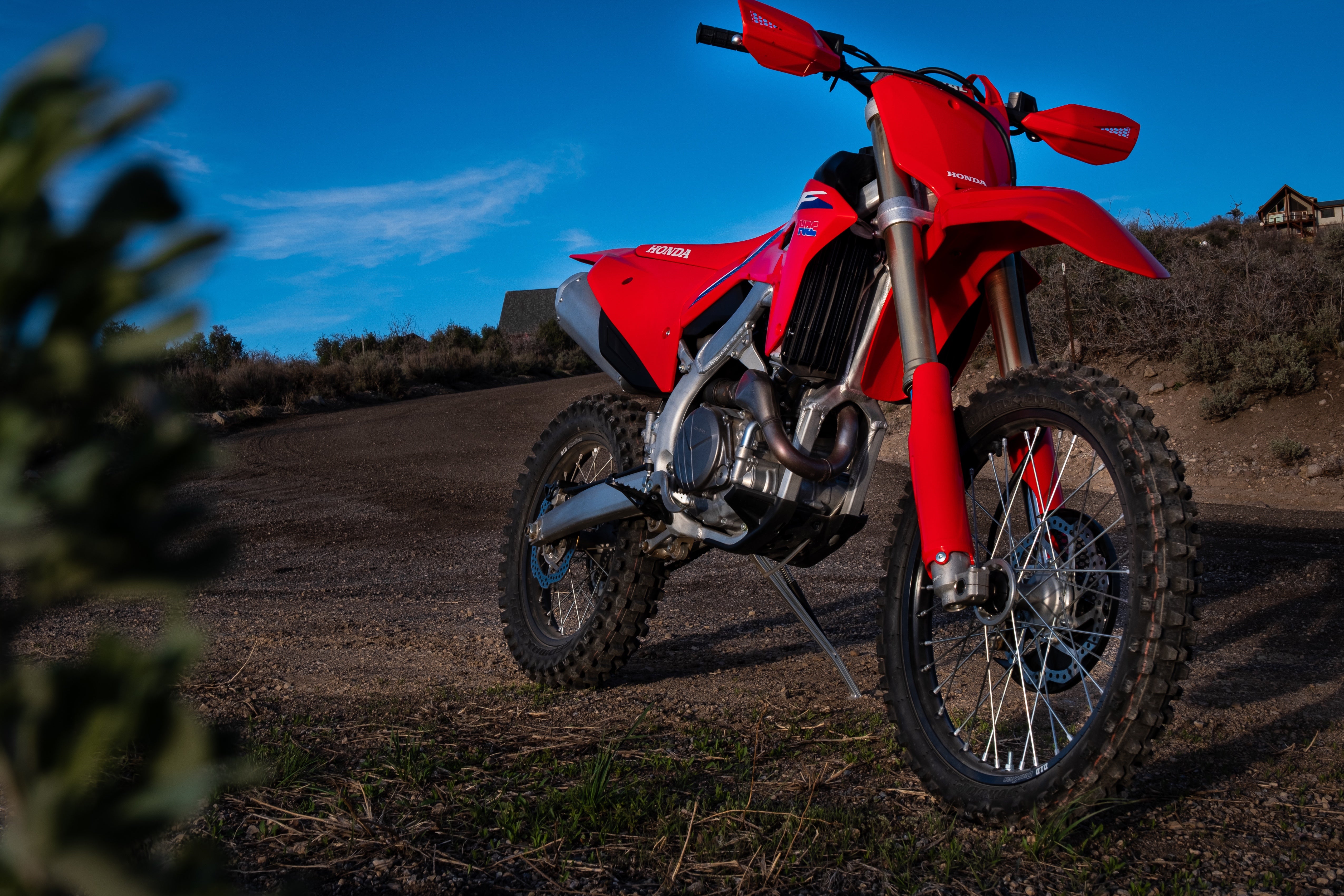 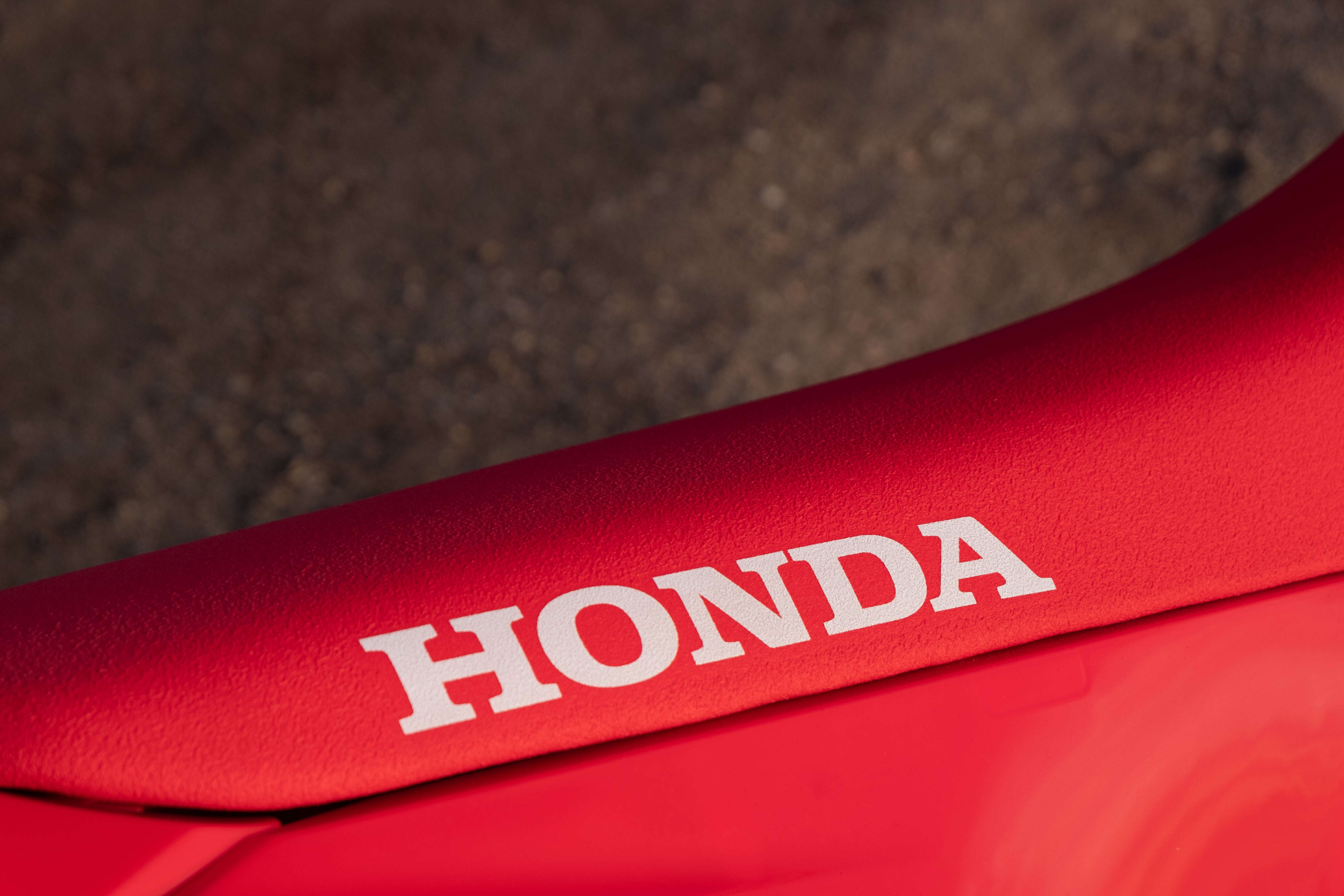 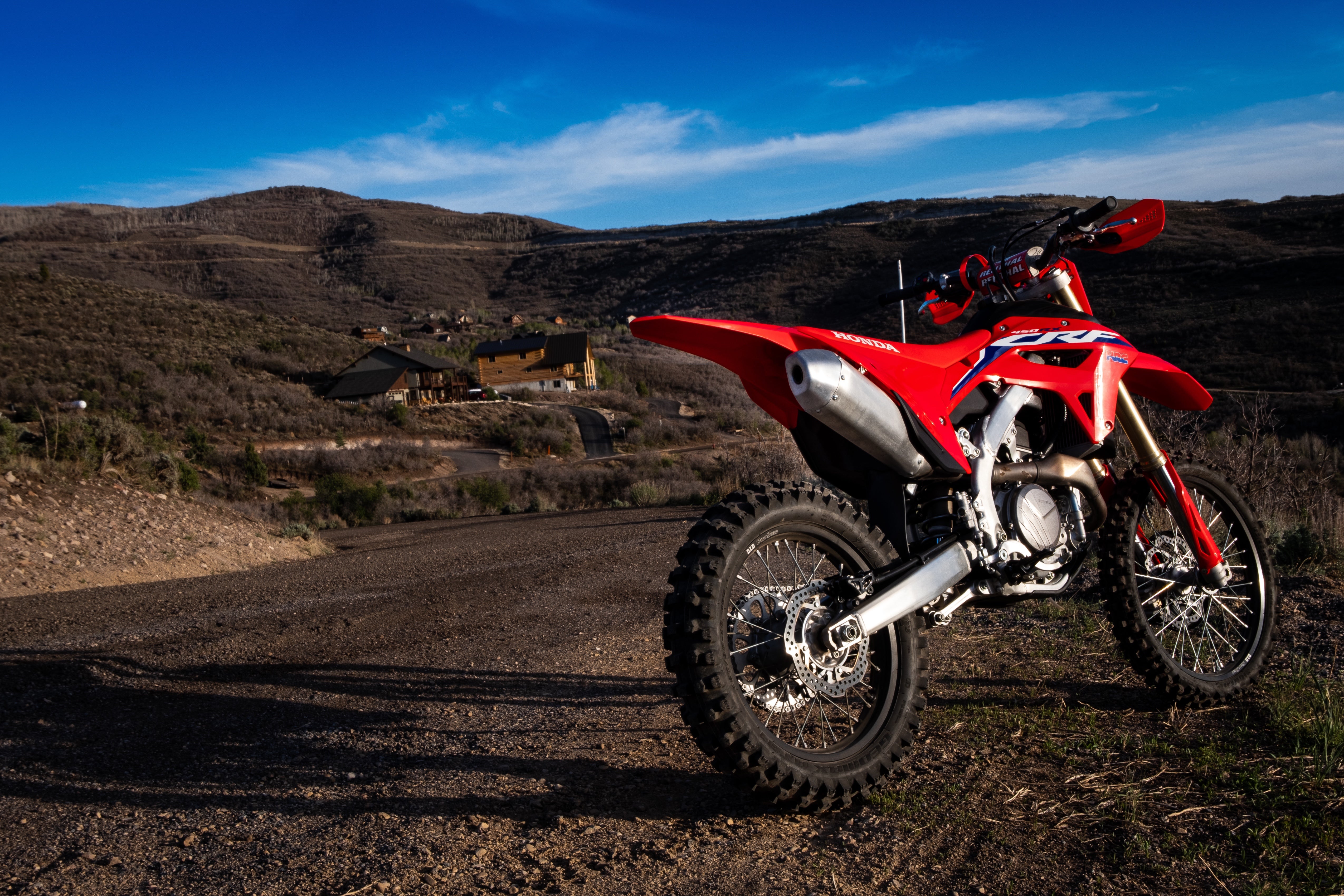