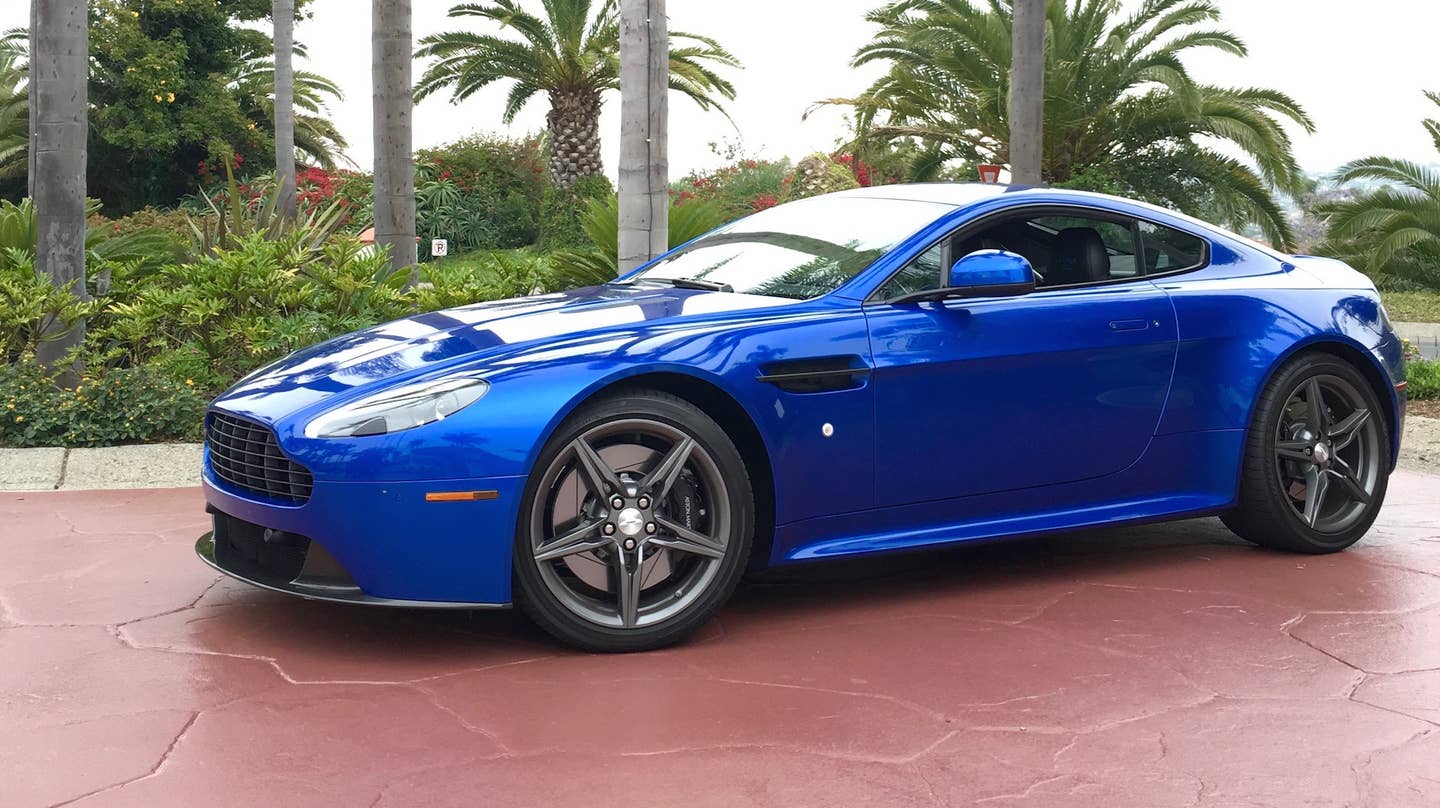 The startup process is absurd: you slot a crystal fob into a spring-loaded receptacle, like some Altrusian shaman manipulating the matrix tables in an episode of Land of the Lost. You wait for a reaction. The response is divine. The mechanical starter whirs, the car shudders to life. And then, instead of pushing another crystal button to activate the automatic transmission, you grab a perfect, leather-wrapped knob and snick it down, doggie-style, into first gear.

The current Aston Martin Vantage may be ending its seemingly eternal run—it was first unveiled nearly fourteen years ago, two life cycles amongst most automakers—but it is going out with a wallop: a 565-horsepower, naturally aspirated V12 wallop, mated to a seven-speed manual transmission. (You can also get a 430 hp V8 with a six-speed stick.)

Packard and Lincoln sold V12s with manuals during the height of the Great Depression, when only those with insulating fortunes could afford them. Ferrari and Lamborghini made their names in the Mid-Century era with stick-shifted twelve-cylinder exotics. Jaguar offered its E-Type with a V12 and a stick to get power up in the power-sapping Malaise years. In the Nineties, BMW built their handsome 8 Series with a dozen cylinders and a manual. Even GMC got into the action at one point in the Sixties with an 11.4-liter V12—the famed Twin-Six—mated to a manual three speed—but that was just for big trucks.

Aston’s current competitive set, however, is nonexistent. But this wasn’t part of some grand plan to corner the market in a vanished segment. It was more a marketing decision born of an atrophied product line and a lack of the financing necessary to compete with its better-funded competitors.

“Rather than bankrupt itself in a futile attempt to deliver similar innovative product, the company has wisely remained focused on selling styling, tradition, and emotion—its century-old strengths,” says analyst Michael Harley from industry research firm Kelley Blue Book. “Aston Martin still offers emotionally and physically engaging V8 and V12 models with manual gearboxes because they remain its core competency—and, quite frankly, none of the other premium automakers are capable of doing the same.”

That said, Aston is in the process of running from the very confluence that birthed this glorious amalgam. With an infusion of capital from Italian private equity firm Investindustrial, and new parts from its recent collusion with Mercedes-Benz, the company is attempting to modernize its lineup. As reported in my conversation with CEO Andy Palmer, seven new models are planned over the next few years.

The all-new DB11, which I drove briefly a few weeks back (and will drive more fully a few weeks hence), will abandon the aforementioned naturally aspirated twelve-cylinder engine for a more potent, more efficient, more flexible twin-turbocharged one. The Vantage replacement, whose appearance is imminent (we predict early 2017), will be powered by a version of the twin-turbocharged 4.0-liter V8 that AMG uses to great effect in its C63 AMG and AMG GT-S, an engine that is likely to find its way into other Astons as well, perhaps even the DB11. And electrification is coming, whether it arrives in the retrofitted form of a 1000-hp Rapide sedan, or the all-new design of the promised DBX all-wheel-drive crossover. Thankfully, Aston has promised to maintain the inclusion of manual transmissions in some of these vehicles, perhaps in part because it's shying away from the cost and complexity (and the superior performance and efficiency) of dual-clutch-automatic transmissions. If you can’t beat ‘em...stick it?

In a sense, the Vantage thus arrived at this wonderful, virtuous place by virtue of inherent limitation. Stuck with a once-advanced, now ancient aluminum platform, a pair of engines that date back to deep in the last century, a transmission pulled from their bespoke racing program, and a long-nosed, long-in-the-tooth (if still long on style) Callum/Fisker-penned body, they squeezed the lemons to make proper gin and tonics. Aston must be given credit for this. The new DB11 is a contemporary car in every respect. But I’m going to miss what I’ve long referred to as Aston’s era of Delightful Anachronism. (And don’t say, “Drive a Morgan.” I’m not attracted to the archaic, or the miserable.)

And what are these cars like to drive? Well, the $212,000 V12 that was supposed to be waiting for me curbside at LAX this week—one of 100 earmarked for the US market—endured some unmentionable ignominy at the hand of a previous driver, and was shipped to the shop for a lengthy program of repair. But a replacement was found in the form of a $138,000, six-speed manual V8 Vantage GTS Sport Edition

I’ve driven every possible variant of Vantage during the (many, many) years of its run. But it’s been a bit of time, and after finding myself behind the wheel of contemporary and more sophisticated rivals like the Jaguar F-Type, Nissan GT-R, and AMG GT-S, I’m delighted by its outlandish, Outlander, out-of-time nature. Updated here and there—carbon ceramic brakes, carbon fiber trim, sport suspension, a carbon-dated infotainment system—but maintaining the feeling of a vehicle developed before a rasher of hefty safety encumbrances inundated every be-wheeled object, it feels almost like a factory resto-mod. (It weighs as much as a BMW 3-Series.) It is quad-enhancing of clutch, stolid of steering, pliant of suspension, and it sounds as delicious and on tone as Elizabeth Warren’s tweets.

Much will be gained in Aston Martin’s forthcoming transition to modernity—including the continued existence of Aston Martin. But while the cars will still be hand assembled in an old fashioned way, they will be all new. For better or worse, as far as the world’s survival is concerned, we entered a period of peak car some years back, an era that combined indulgent, naturally-aspirated power and profligacy with just the right dose of not dying. We are in a new golden age now, where efficiency and potency can be combined, but a certain visceral rawness is sacrificed.

This flameout version of the Vantage makes none of these sacrifices. This Aston is wanton. And I want one.