Nissan has been aggressive at putting more premium tech on its cheaper cars, and the Kicks is a great example of that. 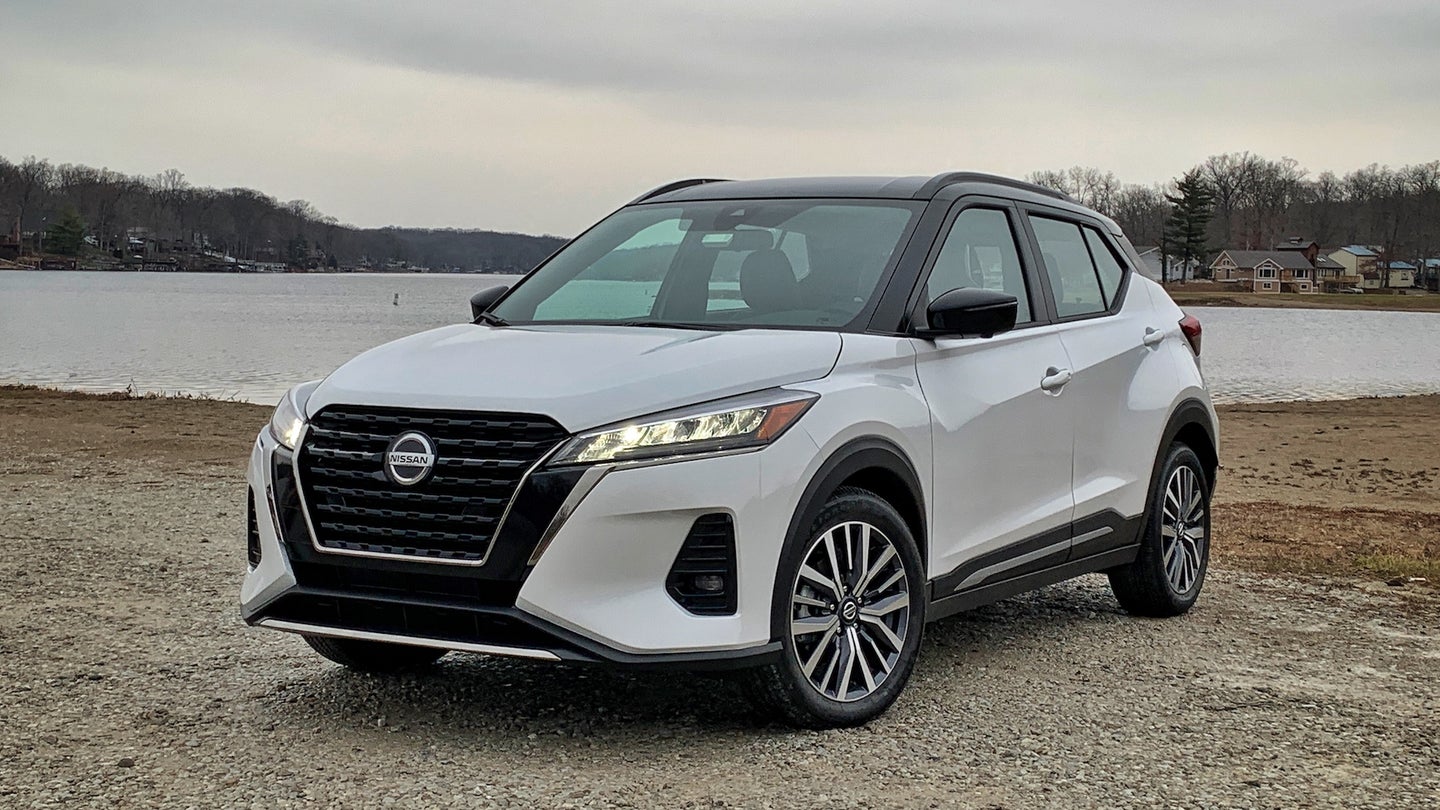 By nature, cheap cars come with a trunk-full of compromises. Frumpy designs, lackluster performance, and most commonly, a lack of tech, comfort, and safety features are hallmarks of bargain-basement cars. In recent years, however, the contenders in the sub-$20,000 field have drastically stepped up their game, with automakers doing a better job at trickling down goodies from their higher-end models into entry-level offerings. The all-new 2021 Nissan Kicks crossover is a great example of this.

When the original Kicks debuted in the United States nearly four years ago, it promised consumers a practical and economical ride wrapped in a funky package. (Not too funky, mind you; it was a lot more normal than the weirdo Juke it replaced.) After all, what's not to love about a high-riding, cutesy hatch with a contrasting roof?

More important, however, was its starting price, which made it affordable to folks looking to buy their first new car, or simply get into a zippy all-arounder without breaking the bank.

Nissan recently dropped off the all-new 2021 Kicks at my house with a full tank of gas so I could briefly check it out ahead of its late-2021 release. (Please note, not all specifications—including detailed pricing—were available at the time of publication, as is common with some early press test cars.)

For 2021, the Kicks was completely overhauled inside and out and now matches its other corporate siblings in the looks department. The signature double V-motion gives way to sharp, elongated headlights similar to those in the 2021 Nissan Rogue that I recently drove. The profile is quite dramatic for a car this size, with sharp lines running upwards toward the rear, giving the Kicks a sense of motion even when parked.

It's hard not to be charmed by a car called "Kicks," especially when it's a tiny, bubbly hatchback that just looks like it wants to have a good time with you. It really does!

The 17-inch aluminum-alloy wheels in my tester were finished in silver with dark pocket accents to match the black roof. Later on, production units will offer orange, red, blue, white, and other colors to match a variety of roof/body color combinations just like in the previous-gen Kicks.

Overall, the floating roof and tall hatch make it seem like a handsome cross between a Japanese city car and a European sport compact. The new connecting taillights are Audi-ish, too. It's a winner in the design department.

I know what you're thinking: the word "performance" shouldn't be in a review of a car with 122 horsepower. But you'd be surprised at how decent the Kicks is to drive. Don't forget, it's more fun to drive a slow car fast than a fast car slow.

The Kicks' tiny four-banger may not be the engine I would personally stuff under the hood—that'd be a 2.0-liter turbo-four with north of 200 horsepower and a six-speed manual—but I won't get carried away with that nonsense right now. Tipping the scales at 2,744, the Kicks isn't exactly in the featherweight division, but it's not exactly bloated either. Its engine and continuously variable transmission do a fine job at propelling the thing, and will even do so in a jiffy if necessary.

As with most underpowered cars, momentum is important, especially at highway speeds. If you want to pass multiple cars, you'll have to prepare in advance. Burying the accelerator into the footwell will make the Kicks move with a sense of urgency—not a racehorse or cheetah kind of urgency—but more of a big Newfoundland dog. Ask me how I know.

In tight city streets or windy country roads, the Kicks feels more in its element. Anywhere between 25 and 50 mph, it feels alive and as if someone had turned an imaginary crank sticking out of its roof.  Don't get me wrong, it won't rocket out of corners or off stoplights, but it's definitely peppy, lively.

The suspension and brakes are definitely on the plush side. Unlike in a Honda Fit (RIP) or Hyundai Veloster, the ride quality is considerably softer and brake pedal application smooth. No making the family sick with overly grabby brake pedals or a jarring ride here. It's worth noting that the base Kicks still rides on rear drum brakes, while SV and SR get disc brakes on all fours.

Nissan has been pretty aggressive at putting more premium tech on its cheaper cars lately, and that applies here too. An area mostly overlooked by most economy cars in the past, the Kicks is with the times not only with entertainment tech—like headrest-mounted Bose speakers—but also safety tech to keep occupants safe.

Nissan offers a standard seven-inch touchscreen in the Kicks, but that's upgraded to an eight-inch unit in the SV and SR trims. Apple CarPlay and Android Auto are also standard in base models, as are keyless entry, push-button start, and something Nissan calls "easy-fill tire alert." This feature lets you know when you've inflated your tires with the right amount of air by honking when you've reached the factory-desired tire pressure.

SV and SR variants are upgraded with remote engine start, remote-sensing key fobs (for locking or unlocking doors), LED headlights and DRL, surround-view cameras, etc. My particular tester also featured the only package available for the Kicks, according to Nissan, the Premium Package, which its price is still unknown. This option adds a Bose sound system, heated front seats, heated steering wheel, wi-fi hotspot, and other connected services.

With various pricing details and even specifications such as cargo volume and others still not divulged by Nissan, it wouldn't be fair to render my final judgment on the 2021 Kicks just yet. If I had to make an educated guess, my SR test vehicle is probably in the neighborhood of $23,000 to $24,000. Sure, that's a bit more than its $19,500 starting price, but it's well worth it considering the nicer amenities.

One thing is for sure: the Kicks is a charming, practical, and zippy little ride that could very well adapt to city and country living alike. It's got the looks, the tech, and it's not a boring drive—should you know how to make up for its deficiencies. And that's more than other similarly-priced econoboxes have to offer.

2021 Nissan Rogue Review: Hard to Get Much More for $30K Than Nissan’s New Crossover

It’s all about that bang for the buck, including driver aid features you usually find on much more expensive cars.