Come for the Alfa Romeo BATs, stay for the Braques and Brancusis. 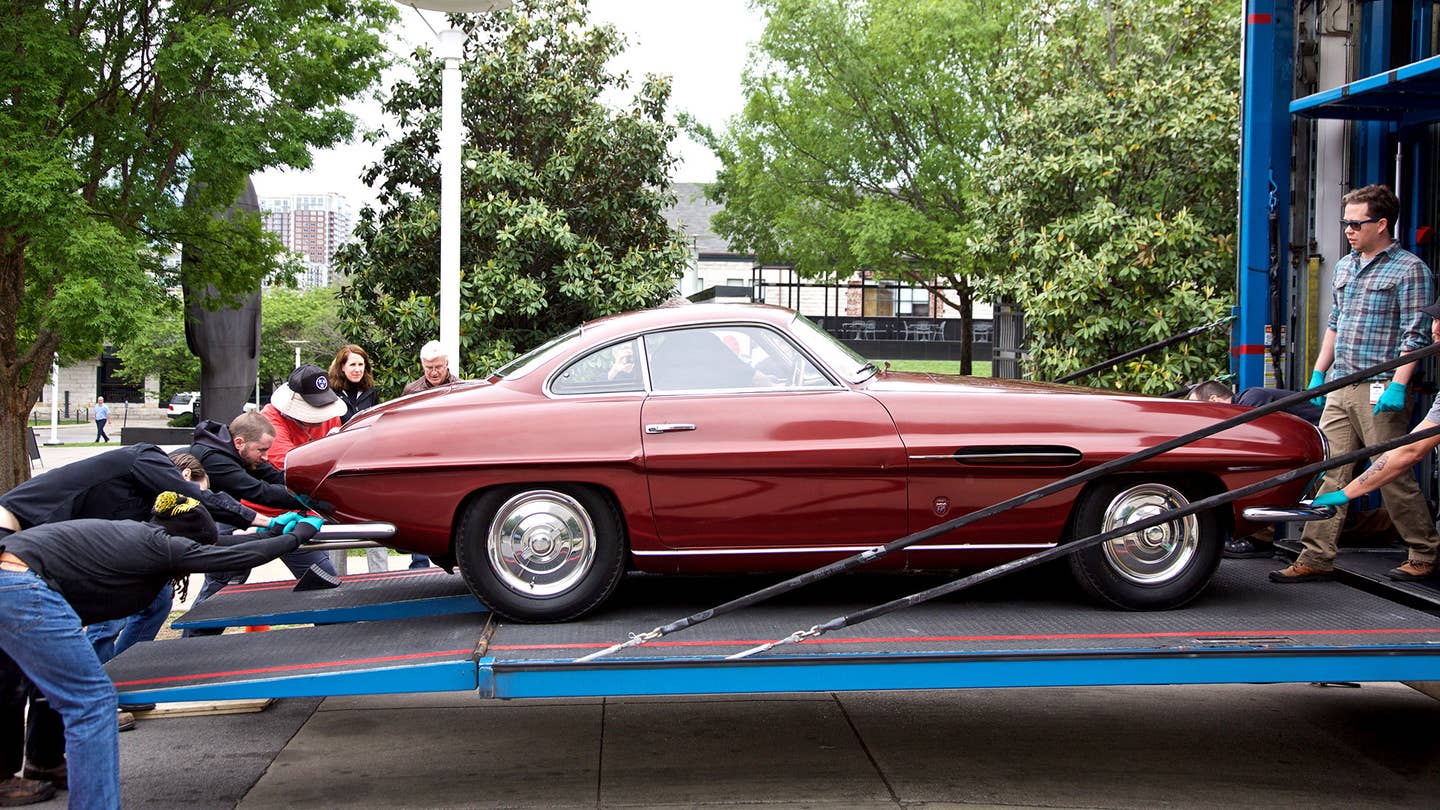 Ken Gross, a veteran automotive writer and historian, has worked tirelessly to elevate automotive design into the realm of capital-A Art. He's accomplished this, in part, by curating exhibits featuring exquisite vehicles at fine art museums around the country. These shows have not only helped the automobile earn its rightful place in our expanding understanding of what constitutes art—joining categories like furniture, industrial design, architecture, fashion, and decorative arts—they have also broadened the audience for their hosting institutions and bringing in record crowds, especially amongst folks who might not ordinarily visit an art museum. Come for the Bugattis, stay for the Braque and Brancusi.

Gross’ latest show, Bellissima, opens at Nashville’s Frist Museum on May 27, and it's certain to be another blockbuster. As the title suggests, the show focuses exclusively on Italian cars—in this case, vehicles from the expansive era following World War II.

“The whole nation of Italy was in industrial ruin when the war ended, having certainly picked the wrong guy with Mussolini,” Gross explains to me in a call from Nashville, where he remains busy installing the exhibit. “But it rose from the ashes in an incredible way, and incredibly quickly, to produce not only great automobiles, but fashion and architecture, design, yachts. It’s almost like anything the Italians touched in the postwar period was absolutely beautiful.”

Hyperbolic, yes, but it also may be an understatement. Gross has gathered twenty-two Italian vehicles—nineteen cars and three motorcycles—created between 1945 and 1975, each of them a true masterpiece. “Not only do you have makes like Lancia and FIAT, Maserati, and of course Alfa Romeo that built cars before the war, then in the postwar period, they’re back,” Gross says. “You also have marques like Ferrari and Lamborghini that came into existence.”

For Gross, this show juxtaposes the expected and unexpected in novel ways. “We have a 1962 Ferrari GTO in this exhibition,” he says. “And the GTO is a car where people almost sort of dismiss it. They say, 'oh yeah, Ferrari GTO, they’re great.' But you look at a GTO, and first of all there’s no straight line on the car. It’s amazingly curvaceous. And it was an extremely successful racing car in its era. It was functionally beautiful, and it still is. It’s easy to look at that car—long hood, selfish little cabin, short tail—and just want to put your arms around it. It’s perfect, I think.”

There’s also the one-off 1955 Ghia Gilda, a collaboration between Chrysler’s master of Jet Age design, Virgil Exner, and his brilliant Italian stylist Giovanni Savonnuzzi. This very car went on to influence the entire Chrysler Forward Look in 1957, a radical break with the past that caused competitors like General Motors to rethink their entire lineup “literally back to the drawing board,” Gross says. The vehicle will be accompanied by an audio recording of its engine note, so visitors can hear the turbine engine's whistle. “Not only does the car look like a jet,” Gross explains. “It sounds like a jet.”

But one of the most spectacular vehicles greets visitors as soon as they enter. (“I like to start with an oh my god! moment, and then it gets better,” Gross explains.) Gathered together for a very rare east coast display are all three experimental Alfa Romeo Berlinetta Aerodinamica Tecnica (BAT) vehicles from the mid-Fifties. “Here’s [famed coachbuilders] Bertone and Scaglione teaming up to do cars that are not only aerodynamically efficient, but stunningly beautiful,” Gross says. “And they still hold up. You can look at these cars today and say, wow, not only were they way ahead of their time [with] low drag coefficients that required a relatively small Alfa 1900 motor to top a hundred miles an hour, you can look at their design and say, 'oh, they put huge fins on it for stability,' but these fins curve sensually. There’s almost a fantastical element in these cars.” Gross chuckles. “We have all 3 BATs together in their own belfry.”

Because I like to stir the pot, I wonder if there was a car Gross really hoped to include in the show but was unable to procure. “I almost hate to say this, but yes,” he admits. “The 1968 Alfa Romeo Carabo by Bertone. It was a very dramatic show car in 1968 and I very much would have liked to have had it, and we came close, but Alfa Romeo had just opened their museum and they had the car there and they really wanted to keep it.” Fortunately, this cloud has a silver (or rather cupric) lining. “Instead, we have the Lancia Stratos Zero, the lowest car of that era, and maybe of any era.” A net win, in my opinion.

Riffing from the current exhibit, I ask Ken to come up with a list of “vintage” Italian cars he would include in a similar show—in 2065. “First of all, let me say I hope I’m alive,” he jokes. But he is ready as ever with a list. “I would have James Glickenhaus’s custom Ferrari P5. That’s an extraordinary dream car, unprecedented almost to have Pininfarina do a custom-bodied car today for an individual,” he says. “I would have a Ferrari Enzo, and probably the whole previous lineup of 288 GTO, and F40, and F50. What I would not have is an Italian SUV.”

Like any good curator, he reconsiders the absolute nature of this prohibition. “I take that back. You know what I might have? A Lamborghini LM002. It’s just so outrageous that I might have to consider that,” he says. “You would certainly not run out of exciting Italian cars because, if it can be said that the automobiles of a country reflect everything that’s exciting, wonderful, beautiful, and special about [that] country, I think Italian cars maybe do that better than the cars of any other country in the world.”

You Can Now Tour the Ferrari Museum on Google Maps

Skip the trip to Italy. Make yourself an espresso and take a virtual walk-through instead.

As ever, do not shake to dispense.