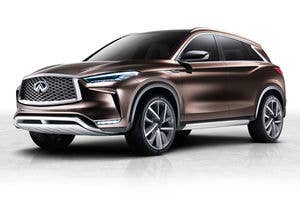 Infiniti plans to have quite the display at the Detroit Auto Show on January 7th with the QX50 being the star of it all. It should be equipped with a host of innovative tech in every field from interior luxury to powertrain options. The manufacturer’s VC-Turbo engine is a marvel of its own, and it very well may find its way into their newest crossover.

The engine was unveiled earlier in the year at the Paris Auto Show. It’s variable compression capabilities make it the first of its kind, optimizing performance and efficiency for varying road situations. The combustion chamber expands and contracts accordingly with throttle input, allowing for the compression to fluctuate as the revs climb and lower. Infiniti said that the VC-T wouldn’t be seen in production until 2018, and it looks like the QX50 will be the first vehicle in the lineup to receive it.

This decision certainly carries a lot of wow factor along with it. Enthusiasts view it as a technological feat that could change the way we do internal combustion engines -- a statement that is undoubtedly true. And to normal consumers, it makes the car unique from everything else on the road. No matter how you look at it, the VC-T is going to make a lasting difference for smarter and cleaner cars in the future.

Along with the QX50’s powertrain, there’s also some big news regarding its driver aids. Infiniti will debut their semi-autonomous developments with the concept as well, but it will put the technology to a different use than its competitors. Instead of searching to make their vehicles completely driverless, they want to use this system to take the boring steps out of each driver’s routine. This includes driving through bumper to bumper traffic, stopping and going at the lights, and various other mundane tasks. This will be the first example of the company’s autonomous efforts.

Collectively, Infiniti is set to have a packed show for Detroit. Fresh innovations along with a major concept reveal will stir up a lot of hype for the next few years.(But we’re most excited for the VC-T!)