Our Thoughts on Top Gear’s Episode 2—Before It Airs 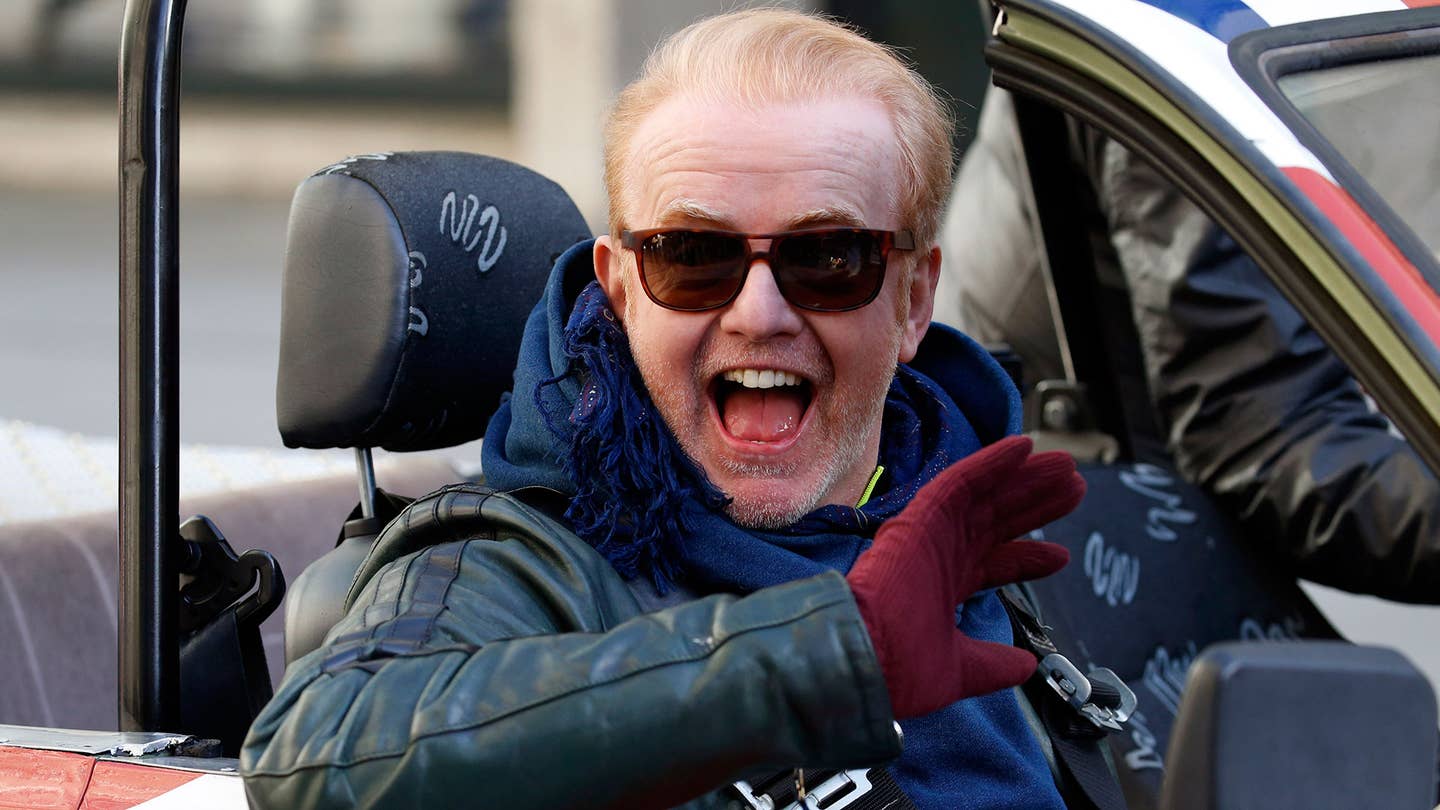 The second installment of the new Top Gear is about to hit U.S. airwaves, but we caught it early and couldn’t wait to share our musings. (Caution, spoilers ahead.) Top Gear is a car show, and while this episode does, in fact, feature some cars, it feels less like an automotive show and more like an unbalanced and coarse celebrity chat show that occasionally takes place in, and around, vehicles. This episode felt more disjointed than the sloppy premiere. Let’s get more granular, shall we?

Chris Evans is still way too goddamn loud. He even acknowledges his inability to control his volume in the intro, as he screams, “Tonight, I get even more shouty!” WHY, THOUGH? The louder this man yells, all with seemingly feigned enthusiasm, the more I dislike him.

Please, Top Gear producers—stop with the skits. When Matt LeBlanc wheels Evans in on a gurney during the opening, saying Evans is “heavily sedated following the making of this first film,” it just feels too corny for the show we’ve come to know and love. Besides, don’t tease us with a joke about sedating Evans. Hit that man with an elephant tranquilizer for real.

When talking about a dream supercar like the McLaren F1 GTR Long-Tail, for heaven’s sake, give us some specs. Evans, who gets to drive the beast, shouts into his ‘90s boy-band earpiece/microphone about power-this, naughtiness-that, and ridiculousness, yet never once gives us a damn number. So we will do his job for him. That very car, of which there are 10 in existence, features a BMW S70 V12 6.0-liter powerplant, good for 600 horsepower and 480 lb-ft of torque. The six-speed will do 0-60 mph in three seconds and will hit more than 240 mph. (To be fair, Evans does note the top speed.)

The McLaren 675LT makes Evans look like a good driver. This road car is absurdly quick, screaming louder even than Evans as it makes its way to 60 mph from a dead stop in 2.8 seconds, and to 100 mph in 5. That twin-turbo, 3.8-liter V8 has been plucked from the 650, but it’s been upgraded to 666 horsepower. As Evans adroitly drifts it around a number of corners, I’m left wondering how he suddenly learned how to wheel a car. Then: “Time to admit the 675 has a bunch of tricks up it’s sleeve that allows you drive like a hero.” Ah-HA. What happens when you turn those driver aids off?

Jenson Button should replace Evans. The answer to how the 675 flies, sans electronic aids, comes at the remarkably quick hands of McLaren’s factory driver, F1 racer Jenson Button. Popping behind the wheel, Button seems far more at ease in front of a camera than Evans, is obviously a far superior driver, and with the POV of the cameras—in front of the tach, looking back—the wheelwork is so mesmerizing, I would watch many minutes of that and never grow bored. Button makes the McLaren come alive, all tire squeal and so much smoke it enters the cabin—all while nonchalantly chatting to a very queasy Evans about the mundane elements he loves about the car (the alcantara headliner, the climate control system). The three or so minutes that Button’s on camera felt the most Top Gear.

Button thinks the 675 may be better than the P1. Or so Evans claims the racer said, off-camera. Button owns a P1 and admits that the 675 handles as stiffly, adding “[The 675] feels like a race car.”

The McLaren 675 is the fastest car to have gone around the Top Gear test track. It nudged the Pagani Huayra out of pole position.

The new crew has no clue how to do a group test. Up first, SUVs. Specifically, Jaguar’s F-Pace, Porsche’s Macan, and Mercedes-Benz’s GLC. Evans and LeBlanc jet off to South Africa to pit the trio head-to-head-to-head, along with Eddie Jordan. For the uninitiated, Jordan is a former F1 driver, team owner, commentator, and now presenter on the program—though you’d know none of that from the way LeBlanc introduces him, simply as, “Top Gear’s weird uncle.” In the first 14 minutes of the film, the mechanics of the SUVs are discussed for a total of two minutes. It has all the hijinks of the old Clarkson, Hammond, and May segments, but without any of the substance. When they do some garbage with oversized martini glasses full of colorful liquid to test the suspensions, not a single host mentions anything about the actual suspensions. Why not? Without talking about the cars, this is just clown shit for the sake of clown shit. Except clowns are actually funny. This was boring as hell.

The celebrity segment needs serious rejiggering. This week, they brought on Damien Lewis. That’s a good get, and a decent fellow. So why pair him with Eddie Jordan and two of the no-name musicians from the South Africa trip? For starters, putting Jordan on the couch makes him seem like a guest, not a presenter. Secondly, why pare down Lewis’s time? If you want to put celebrities next to each other on a British TV show and have them interact, that already exists and it’s called The Graham Norton Show. Thirdly, why are they pitting Lewis’s first and best cars (a Subie Impreza and a Mini Cooper, respectively) against a 1940s Ford and Schumacher’s F1 car? This portion is sad to watch, as are the laps on that new “rally cross” track, which completely lacks any drama.

Jordan asks if Lewis will be the first “ginger James Bond.” Lewis wastes precious air-time to make a case for why he should be. C’mon, guys. TALK ABOUT CARS.

The second segment from Africa is somehow worse than the first. The trio are now using the cars’ reverse cameras to capture footage of wildlife. Yes, seriously. Jordan rips some bits off the bottom of the Merc because he doesn’t think to raise the ride height on the car. During and after they clean up the sheared-off bits is the most we hear them talk about the vehicle’s functionality and capabilities, though it’s supremely cursory.

Bottom line: if we want to watch semi-famous people do silly things in nice cars, and occasionally damage the machines, we can just pop on a rerun of Jackass. Step it up, new Top Gear. What did you think of the episode? Let us know in the comments.