So You Want to Drive Through a Tree? 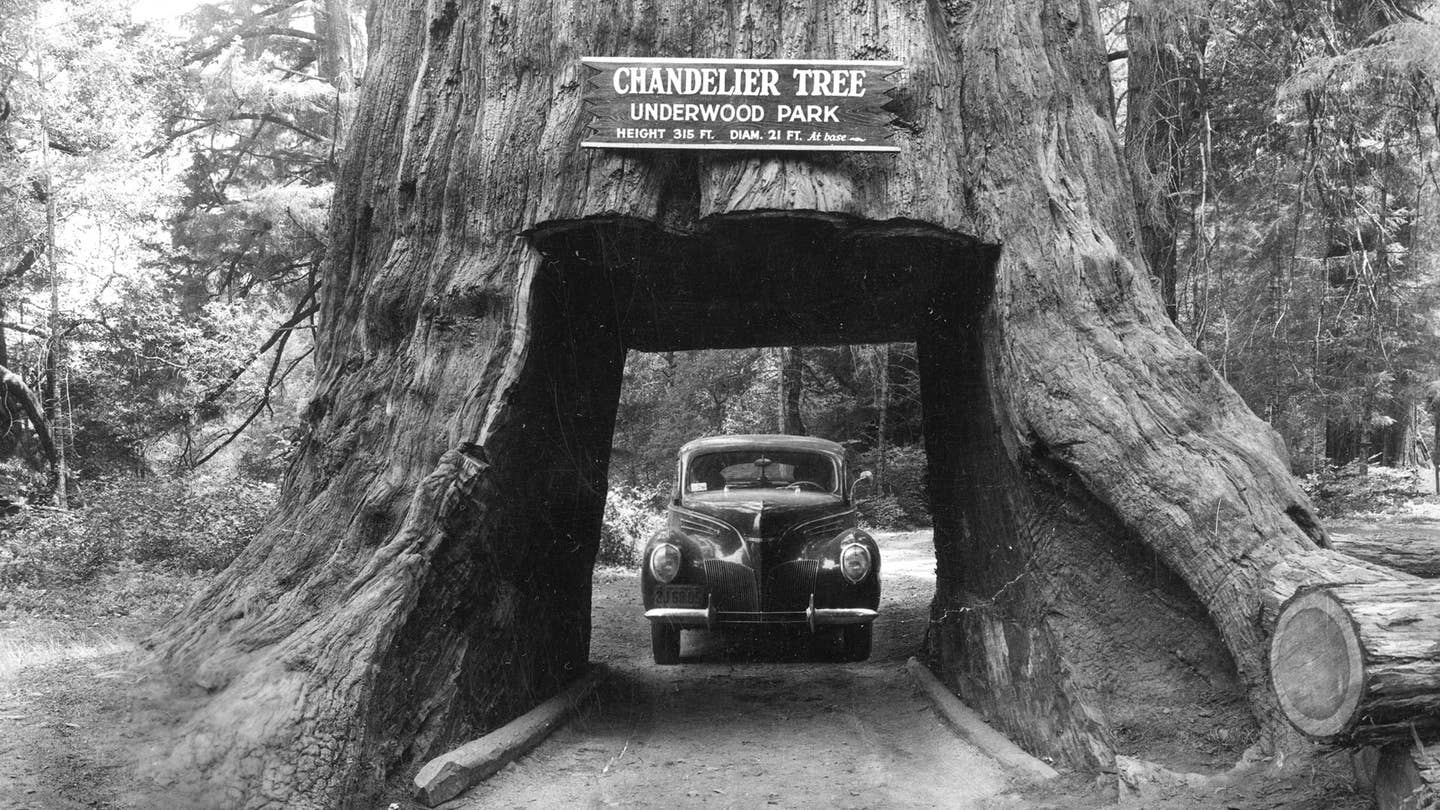 As a freckly kid with holes in my jeans, I distinctly remember a camping trip to Yosemite National Park in which my dad drove our 1965 Volkswagen bus through a tunnel cut into the trunk of a giant sequoia. Known as the Wawona Tree, this huge redwood had been tunneled in 1881 as a way of drawing people to the parks.

Kitschy? Yes. But when our VW motored through that giant sequoia in the late 1960s, we Bornhops were in total awe, the experience driving home the point that these were the largest trees on earth.

Unfortunately, the Wawona Tree fell shortly thereafter, in the winter of 1969. Heavy snow at the top, combined with wet soil and the weakening effect of the 9-foot-high tunnel, caused it to topple. After 88 years serving as a tunnel tree, the 2100-year-old sequoia—a massive 26 feet in diameter—fell, and it still lies in the Mariposa Grove, where it supports its own not-so-little ecosystem. (For the record, a tunneled giant still stands in the park’s Tuolumne Grove, but it’s a dead stump cut off from automobiles and is walk-through only.)

Understandably, giant trees in our state and national parks are no longer tunneled. In their early years, the National Park Service sought to attract people to the parks to gain support for their protection. But times change and the NPS now says its goal is to protect what it calls these “primeval” landscapes by “letting nature run its course with as little interference from humans a possible.” Although the NPS acknowledges that tunnel trees once had a time and place in our national parks, it now says “standing sequoias that are healthy and whole are worth far more.”

Complete agreement here. But if you’re the type who can’t resist roadside attractions, and driving through a gargantuan tree is at the top of your must-do list, you’ll be pleased to learn that three standing drive-through giants still remain. All three, notably, are coast redwoods, and all are on private land in Northern California, right off of Highway 101. For a small fee, you can thread your Honda or Hyundai right through these massive standing arboreal needles.

Fifty miles south of Eureka, in Meyers Flat, you’ll find the Shrine Tree, whose tunnel was formed primarily by a fire scar. It’s $6 per car, and you’ll see that the tree is stabilized with cables. Next up, in Leggett, 50 miles farther south, is the Chandelier Tree, so named because of large branches that sprout from the trunk about 100 feet up in the air. It’s $5 per car, and there’s a gift shop. Lastly, there’s the Klamath Tour Thru Tree, north of Eureka and south of Crescent City. This giant, along the Klamath River, is the most recent drive-through tree; when it was tunneled in 1976, cutters reportedly avoided critical areas of growing wood to safeguard the health of the tree.

But is it really possible to tunnel a tree and safeguard its health?

Not really, says Lathrop Leonard, Forester for California State Parks, North Coast Redwoods District. Although Leonard acknowledges that no official studies have been made about the effects of tree tunneling, he says that boring a large hole through the trunk removes part of the cambium, a thin but vital layer just below the bark that he likens to the circulatory system of a human. “If you remove 10, 20 or 30 percent of your blood vessels,” explains Leonard, “there are going to be consequences.” What’s more, when that big chunk of heart wood at the center of the trunk is removed, the structural integrity of the tree is compromised, making the redwood more susceptible to blow-overs in snowstorms.

Redwoods, as a whole, are great at withstanding diseases because the wood is rich in tannins. That’s why they live such a long time, even with fire and lightning damage. But when the white sap wood layer just inside the cambium—which Leonard says is crucial for leaf and needle growth but doesn’t have tannins—is exposed to the elements by tunneling, it can rot. And when it rots, he says, the sap wood does not become vital heart wood, further destabilizing the tree.

Bottom line, says Leonard: “With these 2,000-year-old trees, this is something the parks should not be doing.” Thankfully, drive-through tunnels in standing giants are relics in our national parks, best enjoyed on kitschy vintage postcards. Road trip, anyone?

Now in the Guinness World Records as the fastest motorized log.