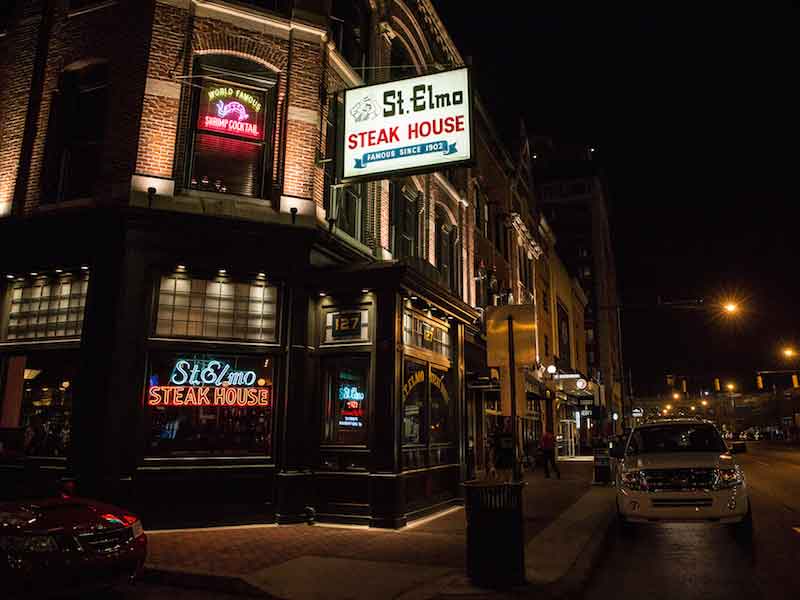 Ten o’clock at night, Labor Day weekend. Alongside The Drive’s west coast editor, Chris Cantle, I’d been on the road all day, scorching earth in a monster European sports car, searching for the best damn fireworks shop in America. Sleep sounded good. Shower, too. Maybe a nightcap, something sweet, like armagnac. But seafood?

St. Elmo Steak House has been here, in Indianapolis, since 1902. During that time, there’s been only three proprietors: Joe Stahr, the founder; Izzy Rosen and Harry Roth, lifelong friends who took over in the Forties; and its current owners, the Hughes family. It’s a warm place, wood inside brick, homey in the way all traditional American steakhouses are. St. Elmo is nationally recognized, but it isn’t a tourist trap. There are no novelty t-shirts or souvenir coffee mugs. The wait staff wears bowties.

Racing drivers get extra love here. The likes of Andretti, Mears, Rahal and Foyt are framed on the walls, a not-so-subtle reminder that Indianapolis Motor Speedway is situated five miles away, just across town. Each May, during the Indy 500, this is where race teams come to eat. The restaurant is named for St. Elmo, the patron saint of sailors, which makes sense: It’s a fine steakhouse, but the shrimp cocktail is what gets folks revved.

Nobody’s sure how long it’s been the house specialty. The earliest menus, undated, show a ‘Jumbo Shrimp Cocktail’ for 20 cents. Now it’s $17.95. Work out inflation, and there’s a pretty good chance St. Elmo has been making this dish since the Silent Film Era. Cantle and I ambled in, grabbed seats at the bar, and ordered up: a couple of Manhattans, and a jumbo shrimp cocktail, five piece. The latter is imported from Vietnam.

“Each year, I meet with suppliers from the Gulf,” says Chris Clifford, VP of Operations. “But we go through over 2,000 pounds of shrimp each week. We order them by the shipping container, in 36,000-pound batches. There’s simply not enough domestic production to support us.”

It’s a matter of topography, too: The way Nappa Valley nurtures grapes, southern Asia, smack-dab on the equator, suits crustaceans.

“They get big over there,” Clifford told me, “six to eight count, meaning each individual shrimp weighs 1/6 to 1/8 of a pound.”

And they’re delicious. Briny, peeled jumbos with a nice snap. At St. Elmo, though, shrimp is mostly a bed for the cocktail sauce. Rumor holds it’s just vinegar-soaked horseradish with a dollop of Heinz ketchup, and maybe that’s true. But this ain’t grocery aisle produce. The horseradish is sourced from the banks of the Mississippi, from Missouri, where St. Elmo “has a guy.” He’ll walk up and down the river, yanking up roots at different farms, giving each a gnaw. Once he approves, the choice herb comes to Indiana, to the kitchen, where it’s ground fresh every day, in-house. The cocktail sauce is small batch, made-to-order.

“Take it easy on that,” the waitress told me, pointing at the pile of sauce heaped on.

I should have listened.

Sweet fancy Moses. It is beyond spicy. It is searing. Not tongue scorching, but electric hot, a burning bee sting inside your sinus cavity. This stuff will make your ears ring.

There’s a delay between biting in and when it hits you. Then your eyes start watering. Then, panic, for a split-second. Oh my god, you think. This is how it ends. Then you breathe in. Breathe out. Then you immediately want more. More perfect sauce, more juicy chilled shrimp. And then you look over, guiltily, at your west coast editor, because you’ve just wolfed down an entire jumbo shrimp cocktail before he’s taken a stab.