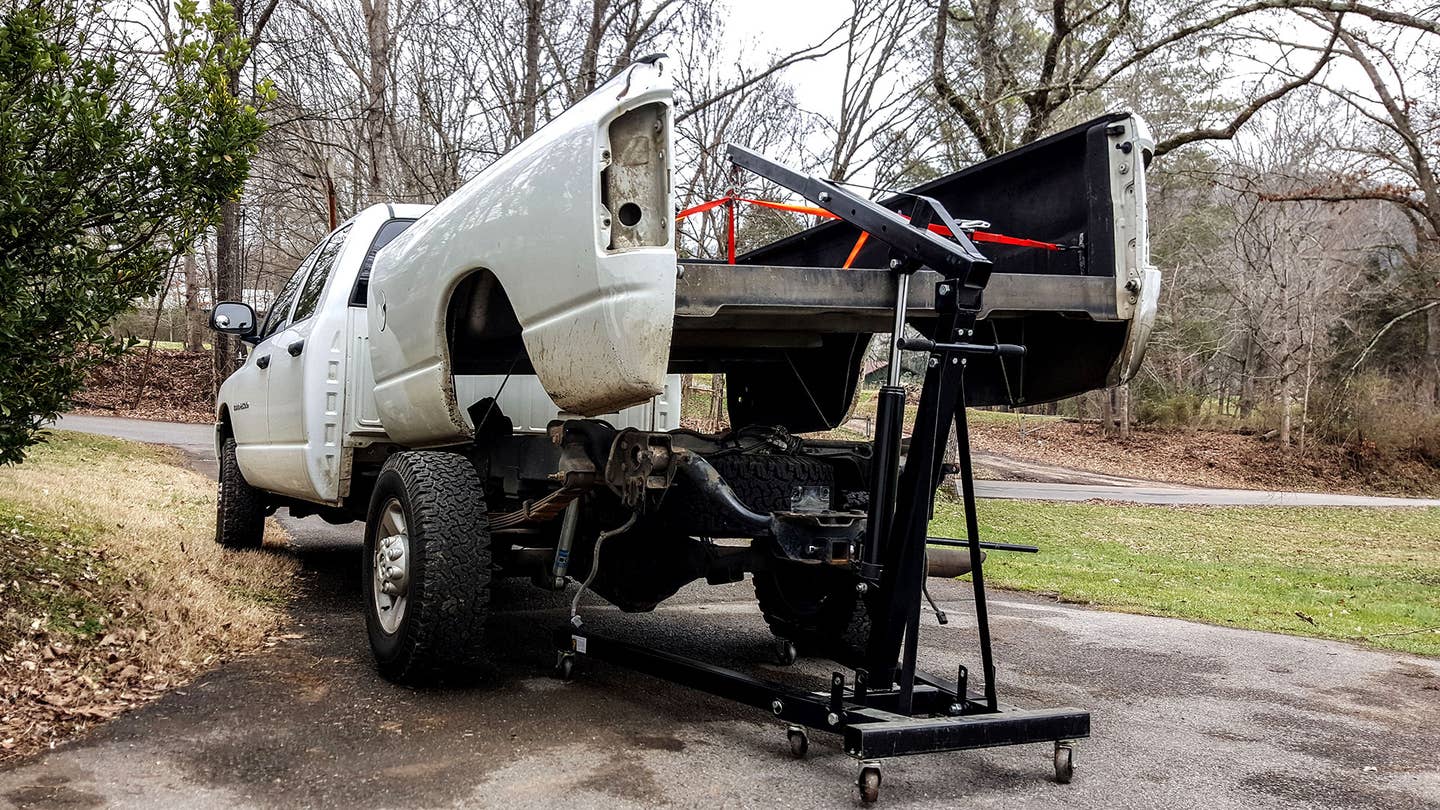 The bed came off this week. It’s the first real step in the truck’s transition from hammered work mule to roaming home. Eight bolts, some wires, and a fuel neck. That’s all it took. I had the thing dangling from a cherry picker inside of an hour. In a few days, I’ll load up and aim the Dodge north, for Pennsylvania, to pick up the aluminum flatbed that’ll serve as the base for our pop-up truck camper.

It wasn’t an automatic decision. Most bed campers are designed to fit a standard pickup box. Which makes sense if you’re hauling out to the woods for the weekend, less so if you’re living out of the thing for a year. The camper has to fit between the fender wells, and that leaves a massive amount of space unused. I wanted those abandoned square feet, both above the bed line and below, where the extra storage could keep us from wearing the same pair of pants for 365 days.

And then there’s the weight of all that sheet metal. I’ve been sweating pounds and ounces since I flipped through the Vehicle Dependent Expedition Guide, terrified of overstepping our GVW and hindering our big white house-bus off-road. The steel bed weighs around 500 pounds. Shaving that heft off the tail means a little more wiggle room for the finished product. Unfortunately, there aren’t many options for bolting a camper straight to your frame rails. You need a flatbed of some kind.

The cheap and easy answer is steel. But, again, all that plate and stock can easily double the weight of the factory bed. While that’s not really a concern on a one-ton dually, our truck is a single-rear wheel, three-quarter-ton job. Aluminum is more expensive, but generally tips the scales at less or equal to the old box. It also has the advantage of never rusting.

Buying a bed isn’t like popping into CarQuest for a starter. There isn’t a stockroom where you walk in, put eyes on what you’re after, and drag it home. No, this is a part you commission, like a ship hull or a symphony. Put your money down, then wait six weeks while a team of guys 500 miles away get to welding your piece together. So there’s some trust involved.

I have no idea what the finished product will look like on our truck. How it’ll function, whether I’ll miss the old box once it’s gone. For someone who’s spent a lifetime sweating every bolt and wire on a fleet of cars and trucks and motorcycles, it’s taken some faith. By this time next week, we’ll know if it was worth it.

In the interim, I’ll clean up the frame. Maybe replace the fuel pump, too, while it’s easy to access. Check the spring bushings, then tool around basking in the hilarity that is a cab-and-chassis pickup with 700 lb-ft of torque in the snow.