Are Cargo Bikes the Answer to Urban Congestion? This Global Shipper Thinks So 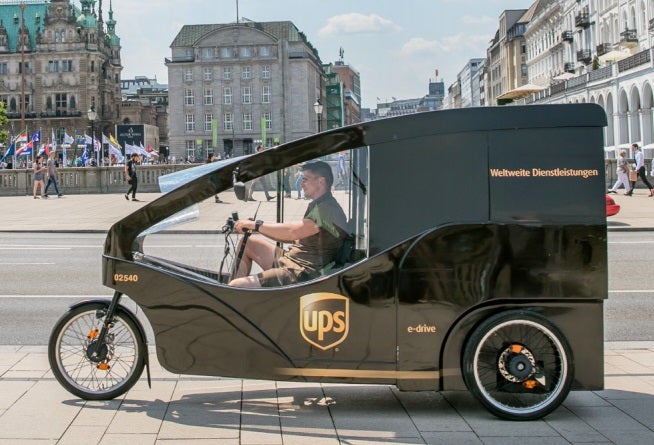 UPS drivers may soon give bicycle messengers a run for their money.

Delivering goods to people at work and home can be logistically challenging in urban areas, where crowded streets and little to no parking offer few options for drivers looking for curbside access to buildings.

So says UPS, which contracted with researcher GreenBiz to study the challenges of moving goods around urban settings, and more importantly, to devise solutions.

Those fixes need to address both the congestion and pollution, which will only increase as more people find themselves living in urban settings, where about half of the world's population already reside, according to a recent report from the United Nations.

Many cities are already taking steps such as adding bike lanes to address the issues.

In London, city officials are working to expand a low emissions zone, with UPS converting a portion of its delivery trucks from diesel to electric power, with 52 of the electric vehicles operating in central London at the end of 2016.

In Hamburg, where the central part of the city is lined with narrow streets and parking can be non-existent, meaning commercial vehicles make roads impassable. The answer, for UPS, was to replace its large delivery trucks with a smaller, city-friendly fleet. Now, UPS drivers pick up deliveries from micro depots and then use alternative methods, including walkers, regular tricycles or electrically assisted versions to make deliveries in pedestrian-only zones.

The car itself will be unveiled December 7.