The Airstream Is a Silver Confessional

When you park an RV on a curb in Brooklyn, people tell you things. 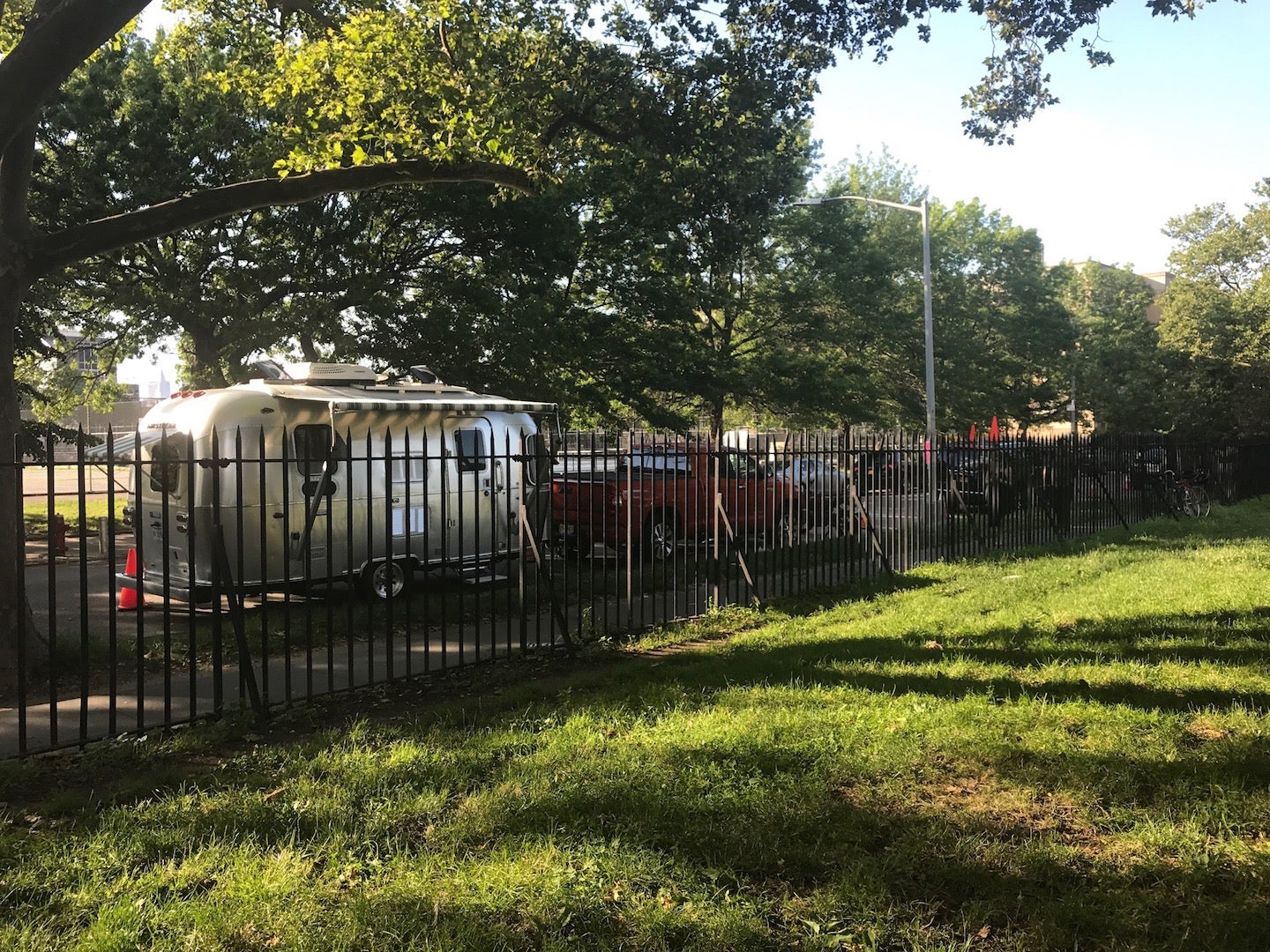 Things happen at dawn in NYC. Living on the curb, in an Airstream, I can hear most of it. Very early yesterday morning, in the midst of a pissing downpour, as the rain pelted the aluminum skin, I listened to two men engage in a brief but vicious fistfight.

“You ain’t living,” one yelled, over and over, until they were both so winded the fight just ended. I was the only witness, and I never lifted my head from the pillow.

I've lived in New York City for two decades, more or less, and have spent most of that time above the 4th floor. Most recently, I was on the top floor of a doorman building. I think of the amenities—the endless hot water, the immediate disappearance of all fecal matter down the toilet, never to be thought of again. Infinite electricity, a refrigerator filled idly to bursting, running around the clock, closets inside closets, precise, year-round climate control, and, for the most part, unmolested silence.

For all the benefits of living above it all, people never really stopped by just to tell me things in my apartment. Now, I'm like pilgrimage destination. On a sunny day lke today, 30 minutes don't pass without someone stopping to say hi, wave, shyly, or ask for a tour. They stop by with ice cream cones, they stop in the midst of jogs around the the park. They wave, give a thumbs up. sometimes groups of them, smelling like pitchers of sangria, push their way in for a look at the interior. One guy asked to use the toilet.

“I used to live out of my car,” an old fella told me. He’s in an apartment now in Astoria, and comes by McCarren to use the tennis courts. “I think it’s illegal to do this, man. The cops are going to tow this away with you inside it."

I worried enough about breaking the law that I actually called the NYPD precinct to tell them I'd be here, around this park, for a while. "That's no problem, I'll let the guys know." There's actually no law against RV parking in New York City—as long as you follow the alternate side parking rules. And don't cause a scene.

Most of the people who approach the door are guys with dreamy looks in their eyes. They see the Airstream and think of it as some sort of shiny escape pod to an easier life. But nothing is easy. The lionization of the beatnik drank itself to death, at age 47, with Jack Kerouac. But guys can dream—especailly if it's just for a moment, on a walk around a Brooklyn park with their kid, eating an ice cream cone. If only my life went a certain way. they'd think, I could be there as well, tethered only to a Toyota Tundra and limited only by a full tank of gas. Of course, the feeling inside passes. I show them around the

Saturday, a German girl stopped by with her boyfriend and offered to buy it when I was done.

Later in the day, a crusty young gutterpunk named Dan stopped by on a bike he said he was "just borrowing" from someone he didn’t know. He was of two minds about the Airstream. When he found out it wasn’t an antique, that it wasn’t gutted inside and filled only with a mattress, he seemed offended. “Man you are totally not roughing it.” I'm not one of him. But when I let him poke his head inside and offered him a seltzer, he reverted to the rule of living on the road: shared knowledge is power.

"I can tell you where to get fresh water," he said. There's a restaurant over by the BQE with two unguarded spigots. "You can fill up and they won't hassle you," he said. "There's nothing worse than getting hassled when all you want is to be left alone and have a drink of water."