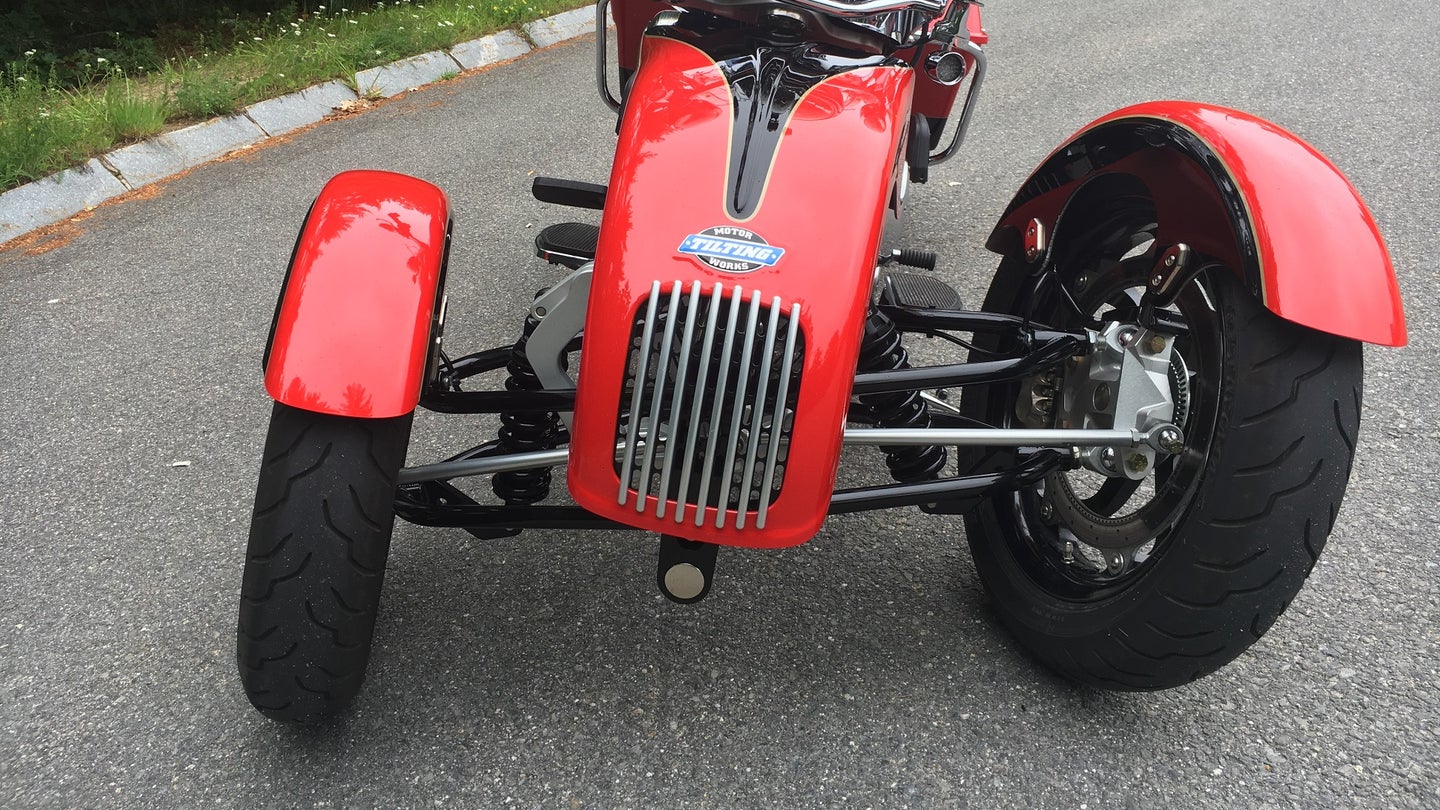 The Can-Am Spyder really doesn't work for me. After years of riding two-wheeled motorcycles, the technique of countersteering and leaning to turn effectively is instinctive. This doesn't work on the three-wheeled Spyder. But the Tilting Motor Works kit adds a second wheel to the front while retaining the original motorcycle's leaning characteristics. Does it ride like a real motorcycle or not? Thanks to the kinds folks at Rocket Moto Sport, a local TMW distributor, I got to try their Harley-Davidson Road King—the same one they showed off at Americade—to find out for myself. Like Jay Leno, I had some reservations at first, but the more I rode it, the more I liked it.

The short answer is yes, it really does ride like a two-wheeled motorcycle. It is easier to point out the differences than the similarities. The turning circle is wider, though the front wheels aren't much wider than the standard Road King hard bags. The steering feels a bit heavier than a standard Harley at parking lot speeds, but once out on the road, it gets easier. Most importantly, it really does lean and turn like a two-wheeled motorcycle, just as TMW claims. While countersteering failed me on the Can-Am Spyder, it remained the best way to turn the TMW Road King. With a little practice, I found I could put the inside front wheel exactly where I wanted it in any turn.

A look at the front suspension reveals how it handles so precisely. This is a double-wishbone suspension with a coil-over shock absorber, just like many sports and race cars. It can be a little bit mesmerizing to watch the front wheels bounce over bumps, as well as the way the inside wheel lifts and the outside wheel drops when leaning into a turn. I had to remember to keep my head up and look forward rather than admire how well the suspension worked. And it did work well, not only stabilizing the bike but soaking up bumps with ease.

So if it rides like a two-wheeled motorcycle, what's the point of spending $9,995 for the TMW kit, plus installation, to add a third wheel? The answer is better braking and handling. With two contact patches in front instead of one, you get twice as much traction, both for turning and for braking power— more, in fact, with the large disc brake inside each front wheel. If one wheel slips or locks up, the second one will keep rolling and help prevent you from dropping the bike.

Not only did it handle well, it also soaked up the bumps better than any two-wheeled motorcycle I have ever ridden. Finally, TMW is working on a TiltLock option for an extra $3,000 that will use hydraulics to keep the bike vertical at low speeds and when stopped, yet retain the bike's original tilting characteristics at speed. Rocket Moto Sport's Road King was not equipped with TiltLock, as TMW has not yet released the system. Yet even without it, I can see how a TMW equipped Harley-Davidson or Honda Goldwing could be a viable option to conventional trikes. It provides the stability benefits of three wheels, yet still rides like it's on two, preserving an important part of the motorcycling experience.