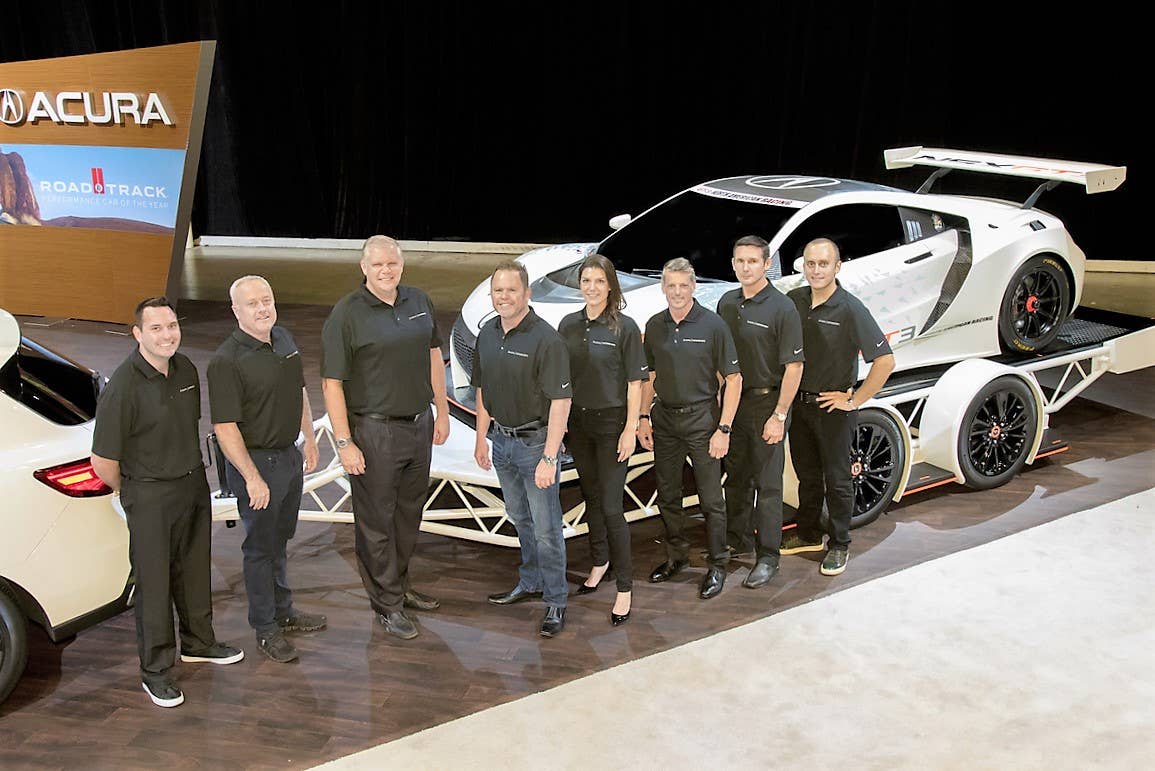 As much as the Specialty Equipment Market Association show held last week in Las Vegas stresses performance, only a small percentage addresses actual racing. That’s largely transitioned to the Performance Racing Industry show in Indianapolis, which SEMA owns. The show, not Indianapolis.

But there’s still some cool racing news made each year at SEMA. Here’s a wrapup:

The full-year RealTime lineup in the Pirelli World Challenge includes the returning Ryan Eversley and Peter Kox. Each team will field a pair of new Acura NSX GT3 race cars.

The NSX GT3 will make its race debut in the Rolex 24 at Daytona International Speedway in January, while Kox ran the new Acura NSX GT3 at three 2016 PWC events during testing and practice sessions.

In Pirelli World Challenge, returning for his third season with RealTime Racing and Acura, the 33-year-old Eversley won three Pirelli World Challenge GT races for RealTime in the Acura TLX GT. Veteran GT racer Kox, 52, joined the Acura Motorsports effort earlier this year as test and development driver for the NSX GT3. He is a previous class winner at Le Mans, in 2003, and was part of the winning lineup at the 24 Hours of Brno in the Czech Republic earlier this month.

For the IMSA WeatherTech SportsCar Championship, Andy Lally, 41, is a three-time Grand-Am class champion, with more than 30 career sports car racing victories. He is a five-time class winner of the Rolex 24, most recently winning GTD at 2016 Daytona International Speedway. The New York native also won Rookie of the Year honors in NASCAR Sprint Cup competition in 2011.

British-born Legge became the first woman to lead the Rolex 24 overall, in 2016, and the first woman to lead an American Le Mans Series Race, at Road America in 2013. Legge, 36, is a two-time Indianapolis 500 starter, most recently driving at The Brickyard for Schmidt Peterson Motorsports in 2013. She has been driving the Deltawing in IMSA competition.

Negri has anchored the MSR driver lineup in the Prototype class since joining the team in 2004, scoring podium finishes each season and five career victories, including the 2012 Rolex 24 and the 2016 season-ending Petit Le Mans at Road Atlanta.

Segal became the youngest champion in Continental Tire SportsCar Challenge history in 2006. The 31-year-old Miami-based driver has a dozen North American sports car class victories to his credit, winning the Grand-Am GT championship title in both 2010 and 2012. He was part of the winning GTD driver lineup at the 2014 Rolex 24 and in GTE-Am at the 2016 24 Hours of Le Mans.

Operating for the past two seasons as a customer team fielding a Honda-powered Ligier chassis in IMSA’s prototype division, Michael Shank Racing has been a consistent front-runner in the headline category of the WeatherTech SportsCar Championship, with two race wins and four podium finishes this season. The Columbus, Ohio-based operation will run a pair of Acura NSX GT3s in the GTD class of the endurance racing series.

The GTD class will be tougher in 2017, with Mercedes-Benz and Toyota expected to join the class.

FORD MUSTANG GT4: Road racing fans likely know that GT4 is a designation for a factory-built racecar, based on a roadgoing model, that slightly less extreme than the for more popular GT3 cars, which are eligible to race in about 50 different series around the world.

The GT4 class isn’t as popular yet. The IMSA Continental Tire series, for instance, allows GT4 vehicles in the GS class in 2017, and will allow only GT4 cars in 2018. GT4 cars can also compete in the Pirelli World Challenge GTS/GT4 class, and in the GT4 European Series.

The Mustang GT4 is the successor to the Ford Shelby GT350R-C, which won the 2016 championship with Multimatic Motorsports and drivers Billy Johnson and Scott Maxwell. While Multimatic is involved in building the Mustang GT4, it’s unlikely Multimatic itself will compete – it’s hard to sell cars to customers when you are fielding a team to compete against your customers.

CHRYSLER ENGINES: Chevrolet pioneered the “crate” engine for racing with the old ASA series, where the cars may have worn Ford or Dodge bodies, but were all powered by GM “crate” engines, so named because they arrive in a crate, and are typically ready to bolt in to your chassis.

Ford also has had quite a bit of success with crate engines for racing, but Chrysler and Mopar have lagged. At SEMA, Chrysler and Mopar announced that they will offer 5.7- and 6.4-liter crate Hemi V8s, complete with kits that include an engine management computer, drive-by-wire gas pedal, a wiring distribution system, and a full wiring harness that will make installation easy. The kits are about $1,800, and the engines cost about $6,100 for the 5.7-, and $9,400 for the 6.4-liter engines themselves.

With 383 horsepower for the smaller engine, and 485 horses for the 6.4, expect to see some Chrysler/Mopar engines in oval and drag racing applications, as well as street cars and hot rods.

HYUNDAI IONIQ: The Korean manufacturer ran a much-modified Ioniq hybrid to a new record at the Bonneville Salt Flats for the hybrid class: 157.825 mph, with an exit speed of 160.7 mph.

As mentioned, the car was hardly stock, including the addition of a nitrous injection system.

The company also displayed a road-race version of the Hyundai Elantra, with a turbocharger, big brakes and other modifications.

FORD F-150 RAPTOR: Ford and Foutz Motorsports displayed a new 2017 Raptor pickup that has been prepared to compete in the Baja 1000. The surprise is how stock the race truck is: It will have a 450-horsepower turbocharged 3.5-liter V6, and modification include a roll cage, racing seats, a fuel cell and special lighting. The suspension has also been beefed up.

AND FINALLY, THE WORLD’S FASTEST LOG: The Cedar Rocket has been certified by Guinness World Record people as the fast wooden log car, at just over 47 mph. It’s built on a Mazda chassis, and is powered by lithium batteries and turbines.