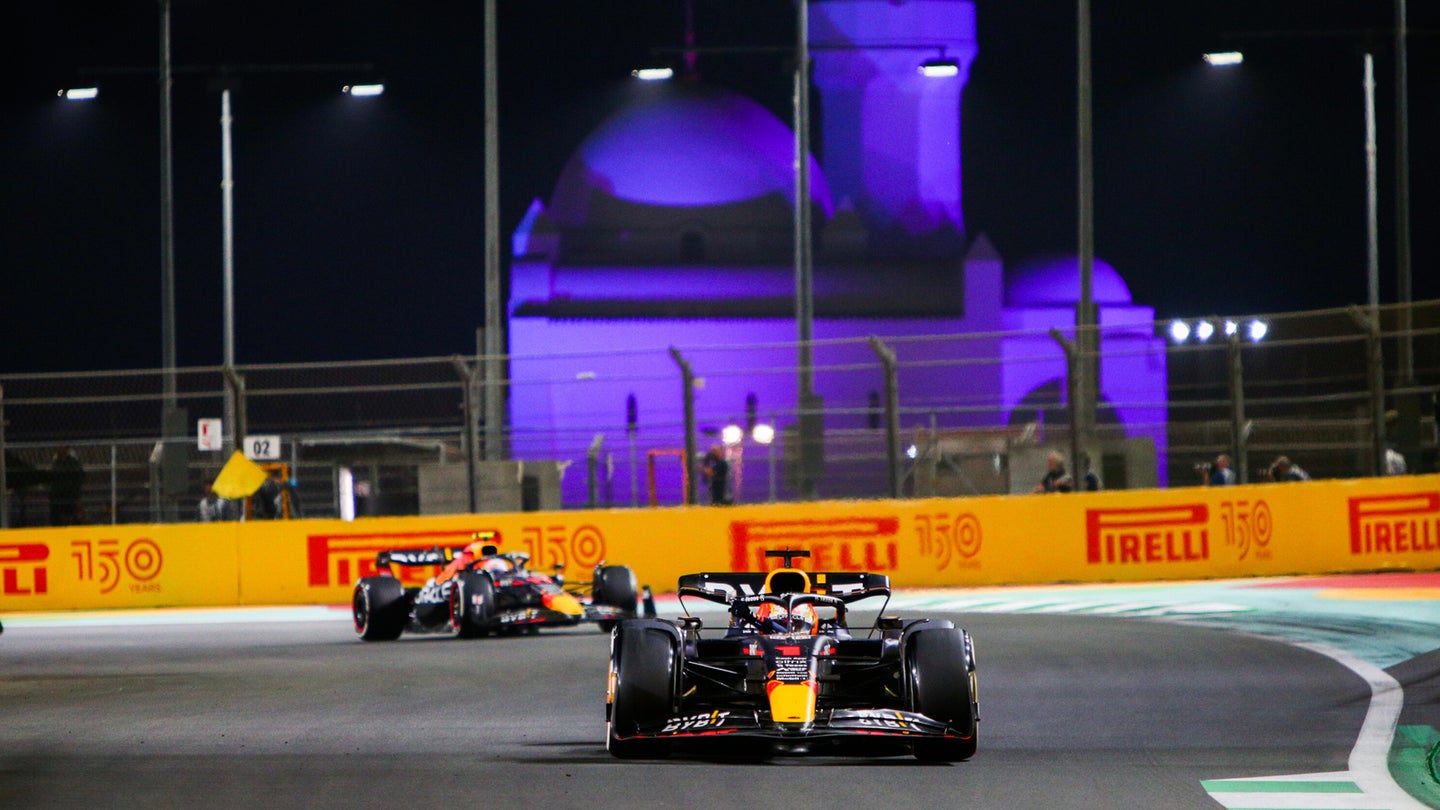 It's not like a Saudi Arabian Grand Prix has ever been a straightforward PR win, but it's quite something to have to say "back then, the concerns were only human rights" or "safety issues were previously confined to the hastily-built track" and then have to add "missile strikes, however, have created an additional layer of concern." Drivers and team staff were keen to leave the circuit by Sunday evening—does the Jeddah street circuit have enough pull in money and racing terms to remain on the calendar?

Very few people were sorry to see Sochi get struck from the F1 calendar. With the exception of last year's race, it's been a boring as heck track with some serious safety concerns, like the 2015 crash that buried Carlos Sainz under concrete barriers. Everyone knew it was a despotic vanity project for Bernie Ecclestone's good pal Vladimir Putin and all-in-all, it was a pretty dismal event to attend or race at.

On the other hand, F1's season-opening race was held at Sakhir International Circuit, Bahrain. The human rights situation in Bahrain is damningly poor and Formula 1 has been repeatedly contacted by groups advocating for change, regarding holding the race there. Most fans broadly acknowledge that there is hypocrisy in going to Sakhir but it's also one of F1's best modern tracks, with excellent paddock facilities for teams. The combination of good racing, good trackside space, and the huge amount of money Bahrain is willing to put behind the event means that the idea of removing it isn't really tabled all that often, despite what reservations might be held about, say, the finer details.

That wasn't the case in Jeddah. At least, not this weekend. Going to Saudi Arabia, in general, can be a fairly nervewracking experience (I've been five times with Formula E and have now slipped into being pretty blasé but it used to terrify me) and F1 had been made more nervous by reports of strikes in the area over the weeks prior to the paddock's arrival. That took a new turn last Friday when, during second practice, a huge plume of smoke became visible over the track. Around an hour later, a Houthi spokesperson confirmed that it was a targeted attack at an Aramco oil refinery just outside Jeddah, seven and a half miles from the track.

Suddenly, it felt that the "no war" message many of the drivers were sporting on their helmets, following Russia's invasion of Ukraine, might seem a little ironic. Following the end of the practice session, drivers sequestered themselves away for what turned into a five-hour meeting to discuss whether they were willing to race, under the circumstances.

The conclusion was that the event would go ahead, although not all drivers—or perhaps any—seemed happy about that. Reached at around 2 a.m. Saudi time, on the morning of qualifying, it was clear that forming a unanimous position between drivers had not been straightforward. Or, at least, it had taken considerable persuasion by team bosses, Formula One Management, and the local authorities to convince them that the unanimous position should be staying, not going.

A statement published by the Grand Prix Drivers' Association—a sort of loose union for F1 drivers—said that after the discussion, they had concluded they would take part in the Saturday and Sunday of the Grand Prix. Stating that security measures had been explained to them, the statement at no point concludes that the drivers considered the situation safe, only that they had resolved to continue the event. The statement ends with the wish that "we therefore hope that the 2022 Saudi Arabian Grand Prix will be remembered as a good race, rather than for the incident yesterday."

And that's the crux of it. Was the race on Sunday good enough to justify overlooking safety concerns, both those at the track—given Mick Schumacher had been airlifted to hospital for checks after a heavy crash during qualifying—and those in the political situation around it? Ultimately, it seems pretty bluntly obvious that F1 should not be racing next to anywhere there's a towering fire from a vicious strike. F1 personnel, teams, and media do not come prepared to enter a war zone and while some, like me, might have prior experience in that, a Grand Prix is an entertainment event, not a necessary service that must be carried out regardless of the circumstances, like health care provision.

It's right to be cynical about why F1 continued with the event, knowing that. Saudi airspace was open on the Friday night and people could have started to leave—most F1 teams and personnel use chartered jets, rather than public flights, so there would have been no massive booking changes needed. But the event, essentially, ran on by stalemate.

Formula 1 CEO Stefano Domenicali got technical to media about whether Saudi Arabia, which has been at war with Yemen for seven years, could be truly considered an active war zone just because missiles hit it.

"Is a terrorist attack a war?" mused Domenicali. "We are talking about sport. We are, of course, in countries with all the authorities, with all the embassies, with all the right governing body. And of course, we will follow that and we will never be in a situation that can jeopardize the safety of our people."

Normally, the question of whether something is a terrorist attack or an act of war is a technicality handled by, say, the UN when determining whether it is a country or a sub-state group committing the strikes. It seems like a strange definition, when it comes to a sporting event, since either way the problem that there are missiles nearby remains the same. F1 is a civilian, entertainment operation and it's not cool to hold a race during potential bombardment for the people working at and attending it or the surrounding political situation.

Formula 1's stance on why and how it can go to problematic places often comes down to some mumbling about sport not being political. Aside from being nonsense in the first place, the past weekend shows that even if you somehow convince yourself of that, events can't be totally apolitical because they exist in the realm of politics. If F1 had canceled its event, there would have been political fallout—likely, mostly on Yemen in the form of bombs. When F1 went ahead, it was inherently a political endorsement of its faith in the Saudi security services. Not, it has to be said, necessarily the group you most want to endorse.

We got a pretty cool battle between Charles Leclerc and Max Verstappen around Jeddah, plus some clever use of DRS. But it clearly wasn't only the relative pace of the Mercedes that had Lewis Hamilton commenting post-race, "I just want to go home."

After several nail-biting laps, Verstappen managed to stay ahead of both Ferraris. Mercedes had to settle for fifth and tenth place.

Formula 1 looks set to continue its meteoric rise in the United States.

Yemen’s Houthi rebels claim to have hit an oil refinery within sight of the track hosting this weekend’s F1 Grand Prix, but the race will still go on.