Wallace took the victory in a rain-shortened race at soaked Talladega. 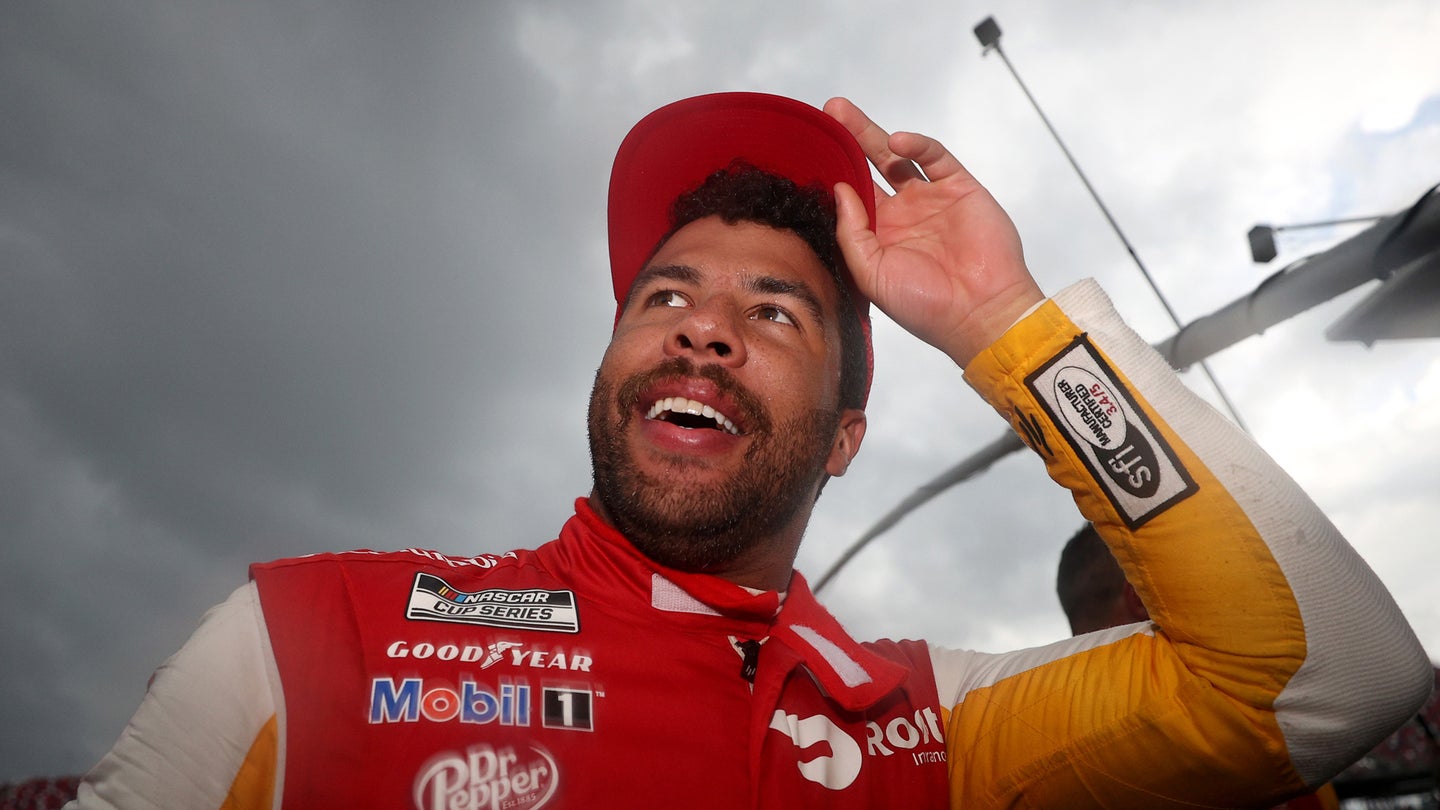 Bubba Wallace has won the Talladega Cup—his home race, coming from Alabama—and become the first Black man to win a NASCAR Cup race since 1964. Wallace switched teams for 2021 to a new venture owned by Michael Jordan and fellow NASCAR driver Denny Hamlin. As a single-car entry, all the potential for winning was on Wallace, and in rain-swept Talladega, he finally took the trophy.

The race was run to a shortened 117 laps from 188 and finished under a red flag after heavy rain stopped the cars from being able to run in stage two. Wallace moved into the lead during what turned out to be the final stages of the race and had to defend from both Brad Keselowski and Joey Logano's Team Penske cars as incidents unfolded across the field.

During the second—and final—red flag of the second stage, Wallace said he was ready to go back out on track if it'd been declared green. "Part of me was sitting there, waiting—if we sit right there, bide our time, if we go back racing that's fine, we'll just put ourselves in position," he said.

"But we had so many cool fans behind us, in the pit box, just cheering for it to rain so that kinda ramped up the intensity for us," he continued in an interview on the NASCAR broadcast. "Man, I'm just so proud of everybody at 23XI—new team, coming in, getting a win late in the season; it reminds me of 2013, waited so long to get that first truck win.

"I know a lot of history was made today, I believe, which is cool," Wallace said, about being the second Black driver to win a NASCAR Cup Series. "But it's about my guys, it's about our team, it's about what we've done. Appreciate Michael Jordan, appreciate Denny for believing in me, giving me the opportunity. Like we talked: it's pretty fitting that it comes here, at Talladega."

Talladega was the scene of a genuinely ugly moment last year when Wallace's garage team found a noose hanging in his garage after had been running a livery in support of Black Lives Matter and following the series banning spectators displaying the Confederate flag.

NASCAR has a pretty bad rep for being unenlightened, which isn't entirely earned. Yeah, crowds at Talladega were chanting "Fuck Joe Biden" at Talladega this weekend but Talladega Nights: The Ballad of Ricky Bobby isn't necessarily a true representation of how things stand. Especially not, uh, relative to Formula One.

When Nelson Piquet Jr. called another driver a gay slur on social media in 2013, he got fined—compared to Max Verstappen's unpunished outburst at Lance Stroll last year. When the noose was found in Wallace's garage, the whole NASCAR field walked with Wallace in solidarity—compared to whatever the increasingly shameful display of athletes who can't manage to use their knees in F1 every other Sunday. But it's still true that of the many winners over the years, Wallace now doubles the number who are Black.

Wallace has won in the national Truck Series and Pro Series East, but despite top-three finishes in Daytona and Pocono, had yet to seal a win in the Cup Series until today. All three winners at Talladega, across each of the national championships, were taking victory for the first time this weekend—Brandon Brown in the Xfinity Series and Tate Fogleman in the Truck Series had both never won in their respective championships before.

Wendell Scott was the first Black person to win the first NASCAR Cup Series race in 1964. Until today, he was the only one. Scott wasn't initially declared the winner, allegedly because the Jacksonville 200 organizers feared repercussions from the crowd. Officially, it was a scoring error: Scott not having been scored for completing four of the laps. Second-placed Buck Baker was originally declared as having won, but it's Scott's name that sits in the ledger of history. Scott died in 1990, but his family didn't even get the NASCAR trophy until a few weeks ago.

Want to complain about Wallace's win being celebrated? Save the comments on tips@thedrive.com.