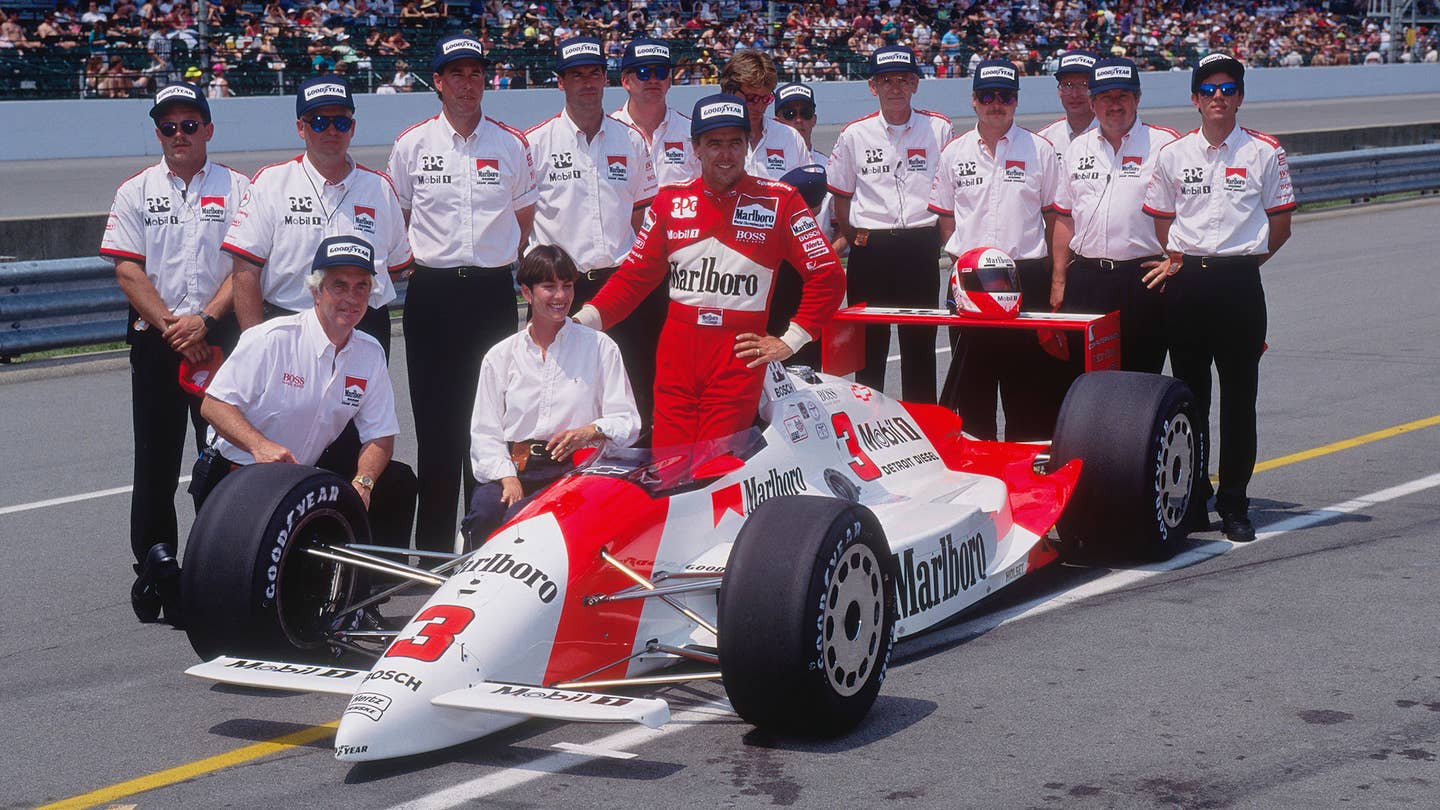 During practice, speeds once again were nearly unprecedented. Mears topped the charts with a lap of 226.569 mph in his Penske Chevrolet (it didn’t count as a record because it wasn’t an official qualifying lap, only practice). Then, the unthinkable: he lost control and slid toward the wall… “It just went backward,” he said, “and I shut my eyes from that point on.” Mears hit the wall hard. His car looked like it had just gotten its teeth knocked out, then it exploded in flames. He walked away, in pain, with a severely bruised foot. (Another driver on that same day, Indy rookie Mark Dismore, wasn’t so lucky; he hit a wall so hard his car reduced to raining parts, and he broke his neck.) But Mears wasn’t done. He jumped in a backup car on the same day as his shunt, and turned another 225 mph lap. Then, still in severe pain, he won the pole the next day. As Penske said of Mears: “Once again, Rick has delivered the bacon.”

On Memorial Day Sunday, 400,000 fans packed into the Indianapolis Motor Speedway and began to drain the joint of its beer. That’s almost as many people as attended Woodstock. “This is more than just a car race,” announcer Paul Page said. “It’s the first good holiday of the summer. It’s a family tradition.” This would be an Indy of firsts, indeed: the first time an African-American driver competed (Willy T. Ribbs), the first time a Japanese pilot competed (Hiro Matsushita), and the first time four members of a single family qualified (Mario, Michael, Jeff, and John Andretti). It was also the first time the pace car driver had endured a heart transplant—that being Carroll Shelby, driving an all-new model called the Dodge Viper.

When Shelby pulled off and the green flag waved, Mears launched from pole into front position. On lap 12, Mario took over, but he lost the lead to his son Michael, who dominated the first 250 miles. There was plenty of bent metal: Kevin Cogan and Roberto Guerrero tangling on lap 25 in a scary bit of wall banging. Cogan was taken away on a stretcher, and the shunt clipped A.J. Foyt’s car, destroying his shot at a 5th Indy victory.

In the final laps, Mears found himself in first after a caution restart, with Andretti pushing hard on the outside. Andretti pulled off a miraculous pass. From the booth: “Michael Andretti takes the lead away from Rick Mears! That’s one of the toughest passes I have ever seen!…That is sheer virtuosity by Michael Andretti!” One lap later, in the same spot on the track, Mears pulled off the same pass on Andretti. From the booth: “If you ever see racing better than that, I’d sure like to know where it’s gonna be!”

Over the last handful of laps, Mears must have been praying, for he had Andretti on his back, and, Mears had come in second in two of the closest Indy 500s ever, once by just 0.016 of a second, in 1982. This time, however, Mears put it away. At 39, he won his fourth 500 (this time from pole), tying the all-time record, which stands to this day. He later revealed that he was in so much pain from his practice crash that at times he had to cross his legs and drive with his left foot on the accelerator.