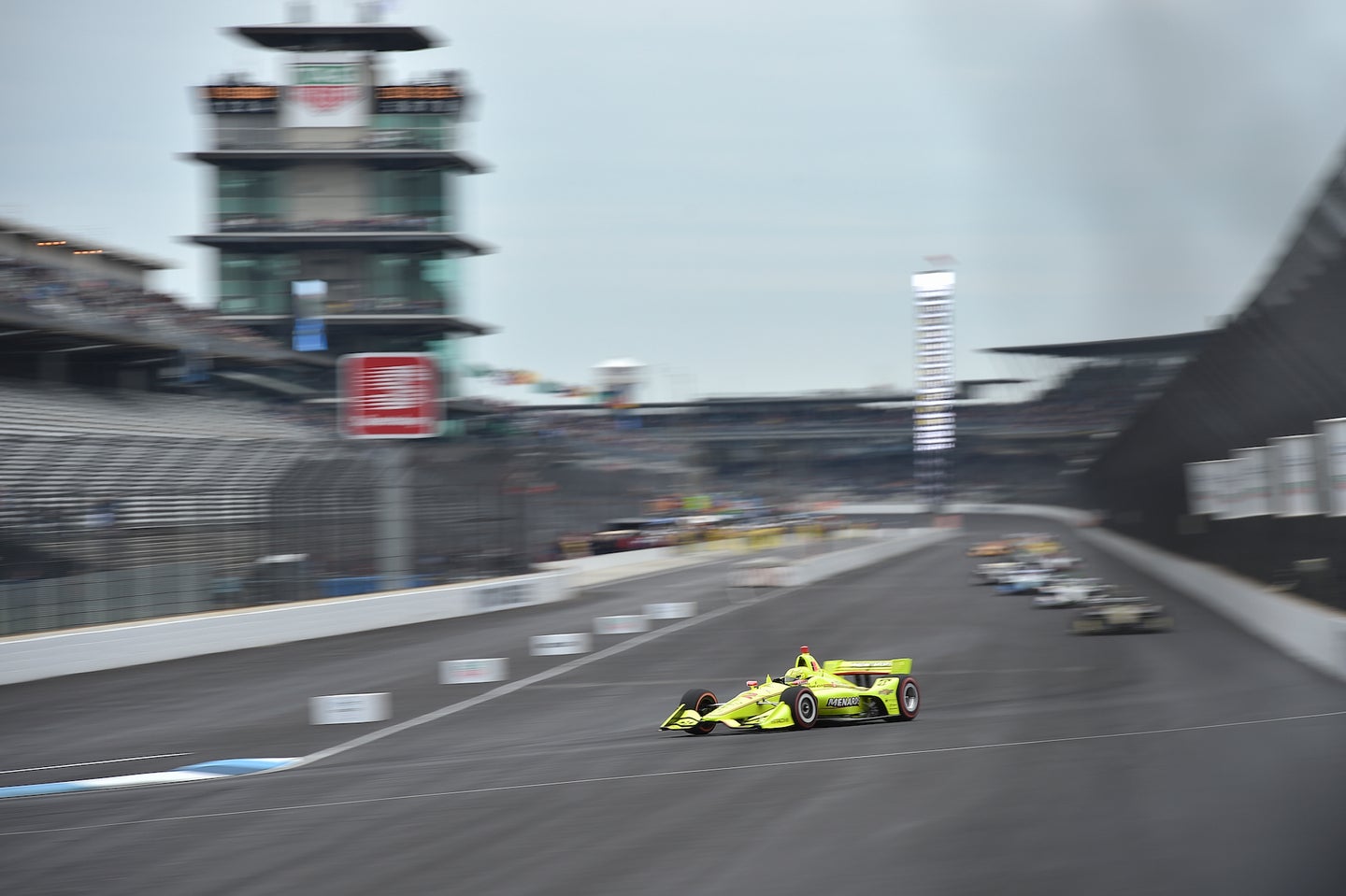 The 85-lap race at Indy's road course proved to be more chaotic than usual thanks to ever-changing weather conditions, which kept the IndyCar field on their tippy-toes at all times. Whether on wet- or dry-weather tires, the slipping and sliding was constant around the 2.43-mile circuit, catching even the most skilled drivers like Helio Castroneves, Takuma Sato, and former F1 driver Marcus Ericsson off guard. The latter lost control of his Honda-powered machine in Turn 14 early on in the race, smashing into the Turn 1 wall of the oval track configuration.

"I took a lot of risks for sure, maybe more than Dixon needed to take some risk because we were in a position where I can take some risks right now, and the car was so good that I just gave it 100 percent, 100 percent every lap," said Pagenaud. "We caught Scott by a lot—and I guess you call it the penultimate lap, the one before the last—and I realized that I had a shot, but I was out of push-to-pass, so my only chance was to get him on the infield. But quite frankly, none of the passes I made today I planned. I just drove with full instinct mode, and it worked out."

IndyCar's youngest winner Colton Herta also retired due to contact on Lap 15, forcing the young talent to claim his third DNF in a row and leaving him with higher hopes for the big race later this month. Another young hopeful, A.J. Foyt Racing's Matheus Leist, managed to hang with the big boys on Saturday and come home a career-best fourth place. Leist had fought for second and third place during the dry-to-wet tire scramble, but couldn't keep up once Dixon and Pagenaud came roaring back.

Despite Pagenaud's excellent charge to first place and Dixon's pristine race management standing out as Saturday's finest, it was part-timer Harvey who deserves a round of applause for keeping a cool head and hot hands when he needed them most. The young racer showed nothing but gratitude for the also part-time MSR team after the race.

"I will remember this day for a long time. It was just so awesome that we finally got this podium," said Harvey. "Great race today in the wet and the dry. When it really was raining, we struggled a bit, but then when it dried up, it seemed liked Scott (Dixon) came back to us there. It's such a great day for the whole team. People forget, we are a part-time program, so podiums like this are massive."

Tonight the Indianapolis Motor Speedway will change onto the oval configuration, which will get put to good use immediately for Monday's practice for the 103rd running of the Indy 500. The iconic 500-mile race will take place Sunday, May 26 during Memorial Day Weekend.

The 42-year-old veteran took his fourth career IndyCar victory at the Honda Grand Prix of Alabama, and the first since his 2018 win in Portland.

A costly late-race caution forced Will Power to surrender the lead and 18-year-old Herta built a gap at the front for his first series victory.