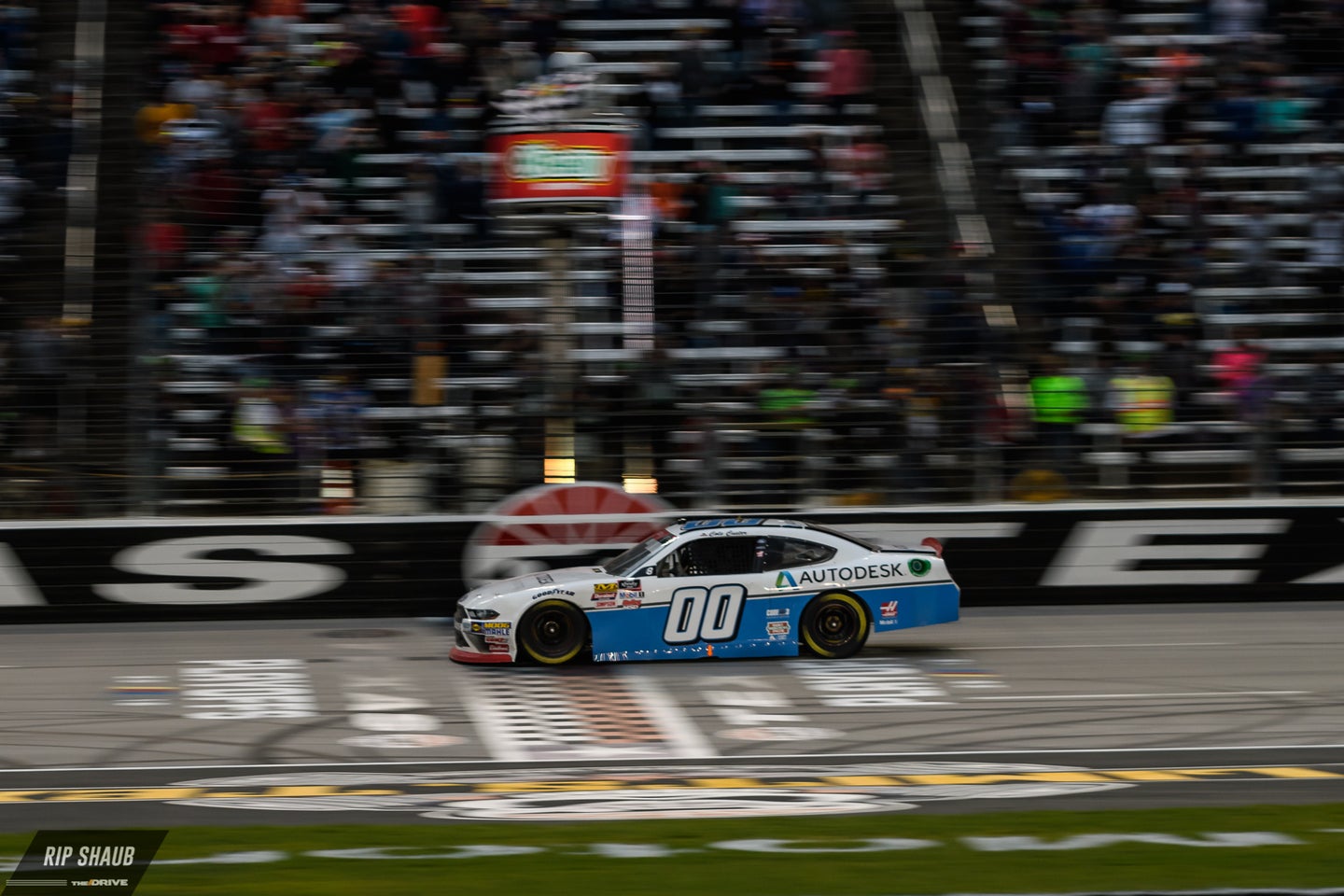 Stewart-Haas Racing driver Cole Custer made the most of a late-race run that awarded him the win at Saturday's O’Reilly Auto Parts 300 at Texas Motor Speedway. Additionally, Custer secured his spot in the final four championship round that will conclude the 2018 NASCAR Xfinity Series season at Homestead Miami-Speedway on Nov. 17.

This weekend was Custer's first W of the year, though he almost missed out on victory lane as Tyler Reddick was looking sure to claim his own glory. However, the Richard Childress Racing-bound driver was forced to lift off on the throttle to conserve fuel, allowing Custer to blow by on the last lap in the No. 00 Ford Mustang.

A messy running made for 13 cautions over the course of 200 laps—a race record. Pit strategy also played a crucial role in the results, starting early as Daniel Hemric took the Stage 1 win.

Drama put star Xfinity driver Christopher Bell in peril, a common trend after he also faced issues at the most recent Kansas Speedway race. He did recover to fourth place in Stage 1 and fifth in Stage 2, though a final stage run-in with Austin Cindric left him to deal with a 32nd place finish.

“It caught me off guard,” Bell said of the Lap 1 spin. “You saw the same thing from the No. 7 (Allgaier) at Kansas. I didn’t feel like I was up to speed at all. The next thing I knew, I spun out."

“I don’t know, it has to be the tire combination. It’s tricky. There wasn’t much room for error.”

Custer would win the second stage, setting himself up nicely with added playoff points to boot. By this time, every driver was looking for nothing short of P1 as they ran closely together in the championship standings heading to the next race at Phoenix ISM Raceway.

Following the final caution, Reddick led the field under green in the closing laps. Custer built up a strong run on Lap 200 and passed Reddick on the backstretch after Turn 2 at Texas Motor, a move which would eventually win him the race by a margin of 0.162 seconds over Reddick—the third closest finish in TMS history

"I can’t believe it,” Custer said after the race. “I did all I could and drove in deeper than I had all weekend into Turn 1 (on the final lap) trying to get on (Reddick’s) bumper, and it worked out."

“We’re going to Homestead, and I think we have a great chance to win it. It’s just awesome," continued the SHR driver. "We haven’t won this year, but we’ve been so close. It’s been frustrating, but we’ve kept going. There’s no better time to do it.”

The NASCAR Xfinity Series will race on Nov. 10 at Phoenix ISM Raceway in the Whelen Trusted to Perform 200. There, drivers will vie for their spot in the final playoff round of four that will take place at the Miami-Homestead season finale. Factoring in the points that were awarded following Saturday's checkered flag, only Custer, Reddick, Elliott Sadler, and Daniel Hemric sit above the cutoff line to advance. Justin Allgaier, Matt Tifft, Christopher Bell, and Austin Cindric are in the bottom half of the Round of 8, meaning they'll need the best possible result at Phoenix to continue their hopes of an Xfinity Series championship.