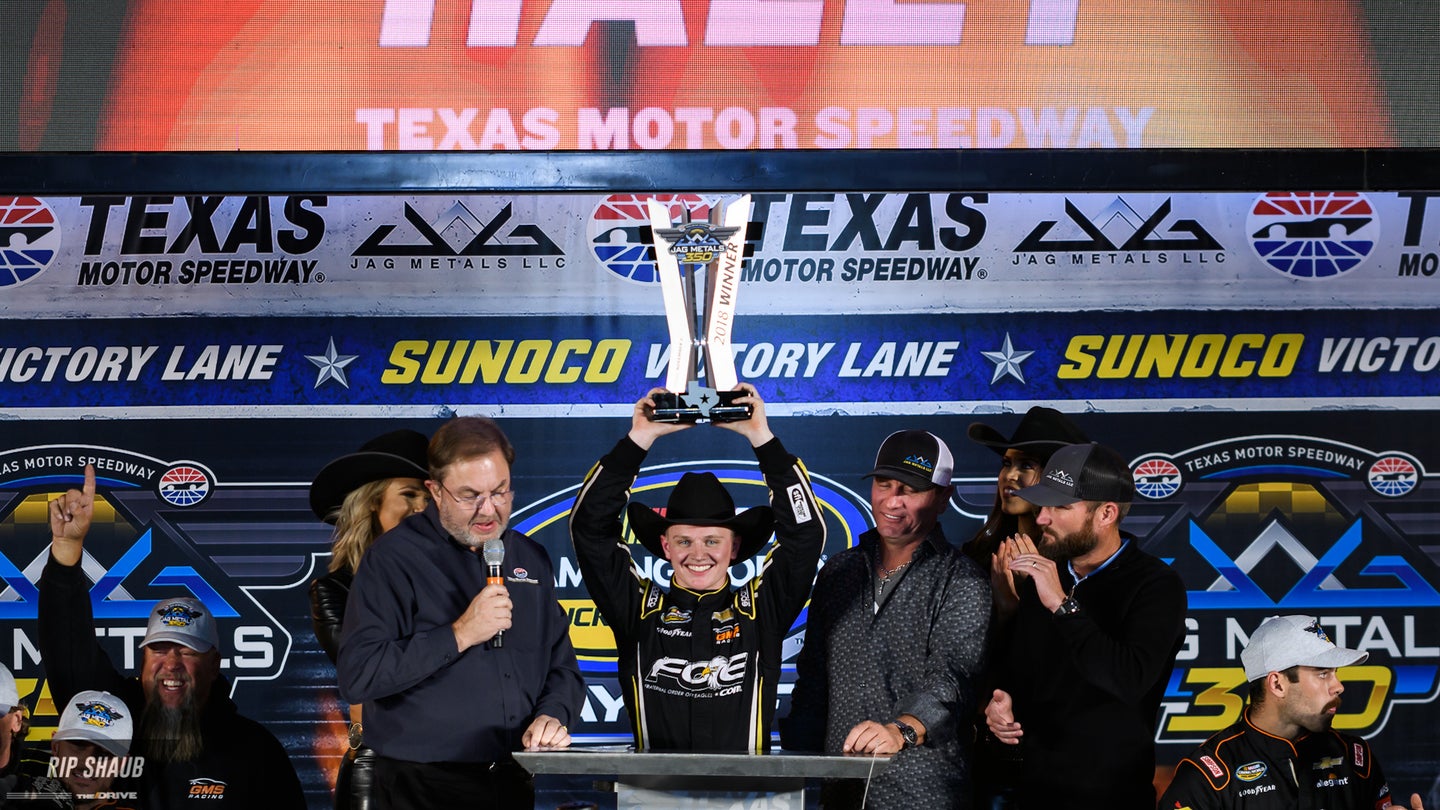 Justin Haley claimed his third-career NASCAR Camping World Truck Series win on Friday night when he took the checkered flag in the JAG Metals 350 at Texas Motor Speedway. With the win, he joined Johnny Sauter in having his own playoff final-four berth claimed.

“I thought we had it lost there,” Haley said in victory lane. “I didn’t quite maximize my pit road. God stuck with me, kept my faith behind me.”

Stewart Friesen led a few laps in the final stage of the race with a pass on Gilliland. But after Friesen was caught speeding on pit road during a cycle of green-flag pit stops in the final 30 laps, Gilliland was back up front after the cycle completed. Friesen was eighth at the checkered flag.

The race got off to a sluggish start, with the yellow flag waving four times in the first 35 laps. Haley won the opening stage by taking the lead soon after the first restart of the race that followed a Lap 3 caution.

Pole sitter Johnny Sauter led only the opening lap before drifting back and making an unscheduled pit stop for a flat tire on Lap 10.

The rash of early-race cautions continued into the second stage with a five-truck wreck on the restart. Sauter was among those collected in the incident that began with Joe Nemechek.

Sauter clinched his final-round playoff berth the previous weekend with a win at Martinsville Speedway in Virginia, but another playoff driver, Noah Gragson, also was involved in the wreck. Gragson still managed a top-10 finish, though, finishing 10th.

Myatt Snider, after pitting during an early caution, stayed out during the yellow flag between the first two stages to inherit the lead. He ran up front throughout the second stage to claim a stage win. He finished the race in 13th position.

The second stage, like the first, ended during a caution that came out on Lap 67 for debris from Sheldon Creed’s truck. After leading two laps in the opening stage, Creed spun and hit the wall on Lap 60.

Several drivers stayed out after the second stage, including Sauter. As a result, Sauter got back inside the top-five. He drifted back outside the top-10 on older tires and was 11th at the finish.

Gilliland, who started the race in the back after repairs from a qualifying incident, also stayed out during the caution at the end of the second stage to inherit the lead.

By the end of the second stage, which ended on Lap 70, the yellow flag waved seven times. The final stage, though, ran caution-free.

Todd Gilliland dominated the second half of the race, but he slowed on the final lap as he ran out of fuel, allowing Haley to take his race-winning lead in the final turn. Ben Rhodes also passed Gilliland to finish second after starting the race from the rear as a result of repairs for a qualifying incident.

Gilliland wound up fourth at the checkered flag, also losing a position to Brett Moffitt.

“Just heartbroken,” Gilliland said. “Kind of disbelief. You’re half a lap away from your first win.”

UP NEXT: The second round, or round of six, of the 2018 NASCAR Camping World Truck Series playoff will conclude Nov. 9 at ISM Raceway, formerly Phoenix International Raceway. Result from the race, the penultimate race of the season, will determine which two remaining playoff drivers will join Johnny Sauter and Justin Haley in the final four the following Friday in the season-finale at Homestead-Miami Speedway. Sauter is the defending winner of the Phoenix race.