It's Bristol Baby. Will it be a Busch Brothers affair for The Food City 500, the first race of the season at Bristol Motor Speedway? 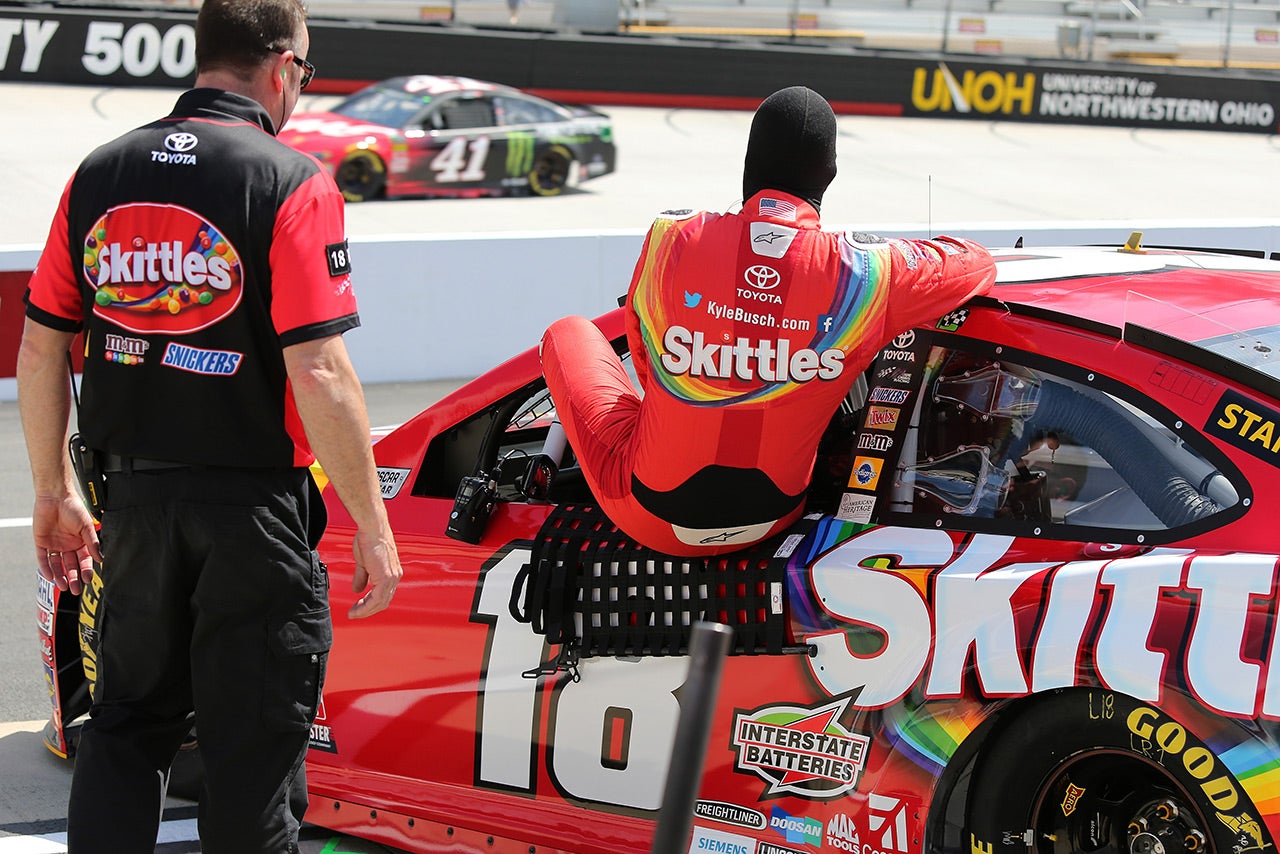 Yes, it’s Bristol Baby! The NASCAR Cup Series hasn’t dropped the checkered flag for The Food City 500 and it’s already been bang, bang, and more banging. Short track racing at its finest is about to go down.


After being edged out by his younger brother for the pole position, Kurt Busch wrecked late in the final Monster Energy NASCAR Cup Series practice. The driver of the No. 41 Ford hit the inside wall in the final minutes of practice and will go to a backup car for the race on Sunday. His Stewart-Haas teammate Kevin Harvick also suffered serious damage during practice and will be in a backup car for The Food City 500. Kurt qualified with a speed of 128.804 mph and brother Kyle took the pole with a 128.822 mph lap during the final round of qualifying.


Practice proved to be unkind to several drivers. AJ Allmendinger went for a spin and his rear end tapped the wall during practice for Sunday's Food City 500 at Bristol Motor Speedway. Thanks to a tire change, Jimmie Johnson will start from the rear of the field. Austin Dillon was docked 15 minutes in both Cup practices because of inspection issues. Not an ideal situation for many drivers heading into the much-anticipated short track race at Bristol.

Once again, weather impacted a Cup race. If you’re talking to anyone except Harvick, Kurt Busch, or Dillon, their probably happy that practice and qualifying went on as scheduled. The start time for The Food City 500 will start an hour earlier thanks to the threat of rain. The Monster Energy NASCAR Cup race at Bristol was supposed to kick-off at 2:13 p.m. EST.

Perhaps the third time will be a charm for the Busch brothers. They have started on the front row of a Monster Energy NASCAR Cup Series race on three occasions. The brothers did it in Las Vegas in 2009, Texas in 2013, and now at Bristol in 2018. Of course, Kyle was on the pole each time.

The Monster Energy Cup Series races at Bristol twice a year. The past 10 winners above represent the first race of the year at Bristol Motor Speedway.

Kyle Busch is a six-time winner in the NASCAR Cup Series at Bristol. His brother Kurt Busch is a five-time winner at Bristol, but he has not won at the half-mile track since 2006. That's 12 years ago! Let that sink in.

We have already established Jimmie Johnson is on a losing streak. I hate to use the word “losing” but he is not winning, so he's losing. The Hendrick Motorsports driver won the April race in 2017. He is clearly capable of getting the job done at “The Last Great Colosseum.” It’s worth noting, Johnson has eleven top 5s and eighteen top 10s at Bristol. Unfortunately, having to deal with a tire change during practice will prove challenging.

One other notable is Kevin Harvick. Harvick has twelve top 5s and seventeen top 10s at Bristol. He won at Bristol in 2005 and 2016. Like Johnson, Harvick has a lot to overcome. He will also start at the rear of the field with teammate Kurt Busch.