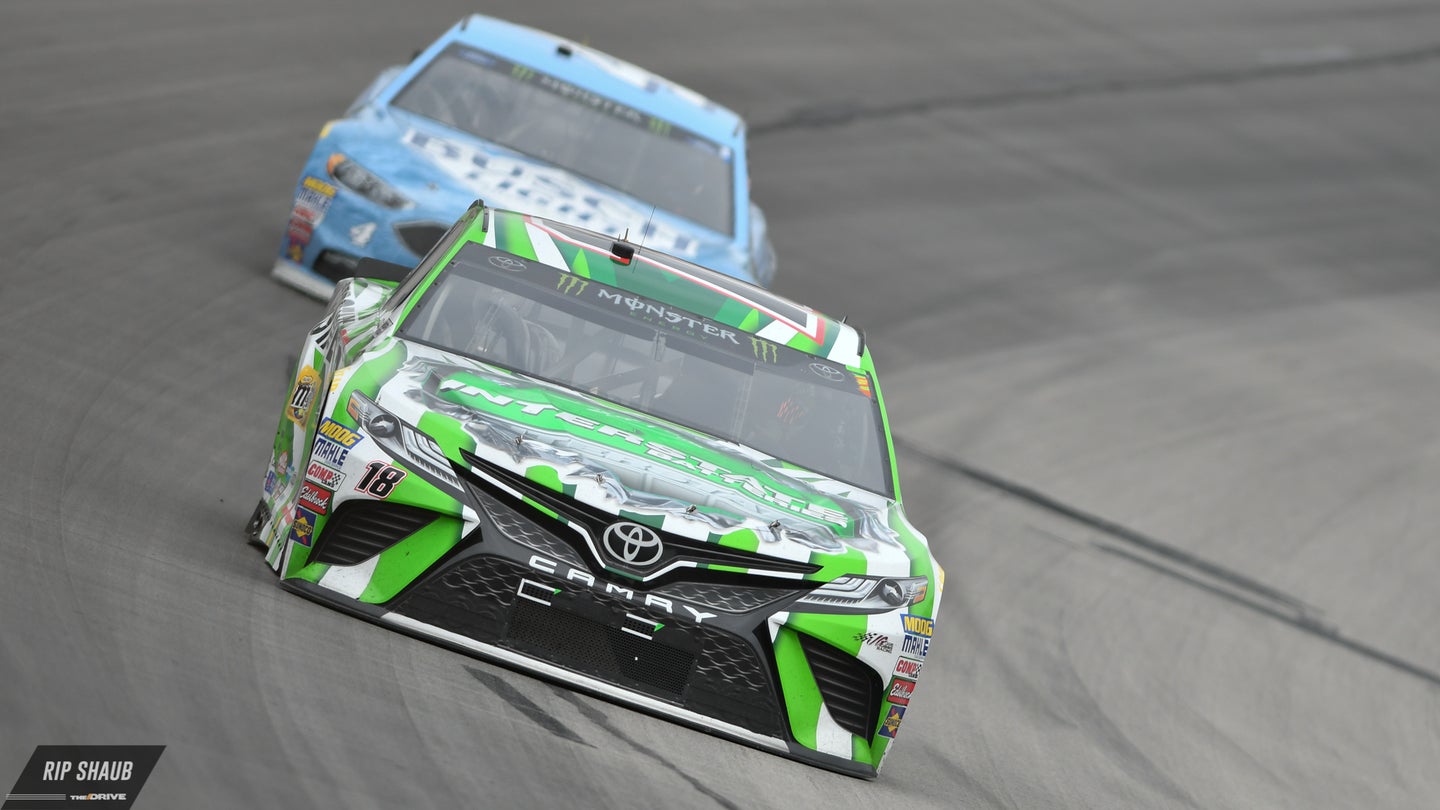 Everything was big at the Texas Motor Speedway for the O'Reilly Auto Parts 500 Monster Energy NASCAR Cup race. We saw big hits, a big multi-car wreck, big disappoints, and a big win for Kyle Busch.

The day appeared to belong to Kevin Harvick, but it was Busch who eventually captured the green and white checkered flag. Harvick won the first stage at NASCAR’s fastest 1.5-mile track and it looked like he was well on his way to his fourth win in six races until a series of misfortunes did him in on pit road. Major mishaps were seemingly a recurring theme for Harvick. Thanks to a flying lug nut, one of his tire changers had to deal with a jammed jack, and just when he bounced back, the team received a penalty on lap 237 for too many crew members over the wall. Harvick, who led 87 laps of the race, also had to make an extra visit to pit-road for a loose wheel.

It takes drive and focus to win 44 NASCAR Cup races. It takes perseverance to finish second place three times out of six races and continue to race to win. After his victory, Kyle Busch said, “…I give everybody hell on Mondays or Tuesdays during our meetings, you know, so that's kind of the biggest thing is just making sure that you keep trying to put the drive and the fire and keep everybody lit up and fired up. And, I feel like I'm pretty easy to be able to do that because of myself and my temperament and my drive and my focus and everything that I do behind the wheel. So, as much as I give it everything I got, I want to make sure all of our people are giving it everything they've got too, and they've been doing a phenomenal job.”

The Busch brothers—as in Kurt and Kyle Busch—ran first and second heading into Stage 2 of the O’Reilly 500 at Texas Motor Speedway. Kyle eventually jumped in front of big brother Kurt, won the second stage, and never looked back as he drove his Joe Gibbs Racing No. 18 Interstate Batteries Toyota Camry for the win. Kyle led a race-high 116 of the 334 laps. In addition to his 44th NASCAR Cup win, it is worth noting that Busch also has 91 Xfinity Series wins and 50 NASCAR Camping World Truck Series victories.

Sadly, Jimmie Johnson was a non-factor at Texas Motor Speedway where he has won seven races in total. NASCAR’s young guns made a push, but it was the series' veteran drivers that came up big. There were 12 cars on the lead lap at the end of Stage 2; however, only 10 drivers finished in the same fashion thanks in part to a big seven-car pile-up that put the race under a red flag caution. On lap 177, Denny Hamlin went for a spin that took out veteran drivers Jimmie Johnson, Aric Almirola, and Brad Keselowski, among many others. When asked who was to blame for the wreck, Keselowski blamed it on aerodynamics.

Ford managed to secure five of the top 10 spots. Three of the remaining five went to Chevrolet, and two to Toyota. Six veteran drivers raced to a top 10 finish at Texas with Kevin Harvick and Jamie McMurray claiming the next two positions behind race winner, Kyle Busch. McMurray has not won a race since 2013, and this is his best finish since the May 2017 race at Talladega. Rookie driver Bubba Wallace Jr. scored an eighth-place finish, his first top 10 since his runner-up placing during the season opener at Daytona. Fellow Rookie of the Year contender William Byron scored a tenth-place finish.

Clint Bowyer followed up his win last week at Martinsville with P9 this weekend. Ryan Blaney, who won the Xfinity series race at Texas Motor Speedway the day before, followed-up that win by finishing fifth in the Cup series race.

The next stop for NASCAR is the mountains of East Tennessee for the Food City 500. For those that enjoy short-track racing, Bristol Motor Speedway is a fan’s dream. One of the most anticipated events on the Monster Energy NASCAR Cup Series schedule, the Spring race at Bristol should prove to be entertaining.

Will Kevin Harvick win his fourth race of the season at Bristol? Can Jimmie Johnson get that old thing back? Will one of NASCAR’s young drivers finally make their way to Victory Lane? The Food City 500 Monster Energy NASCAR Cup Series Race (500 Laps, 266.5 Miles) at Bristol Motor Speedway will start Sunday, April 15 at 2 p.m. EST and you’ll have the answers to these questions and more. If for nothing else, I’m sure all the Kyle Busch haters (and fans) will be tuned-in to see if he can get back-to-back wins.