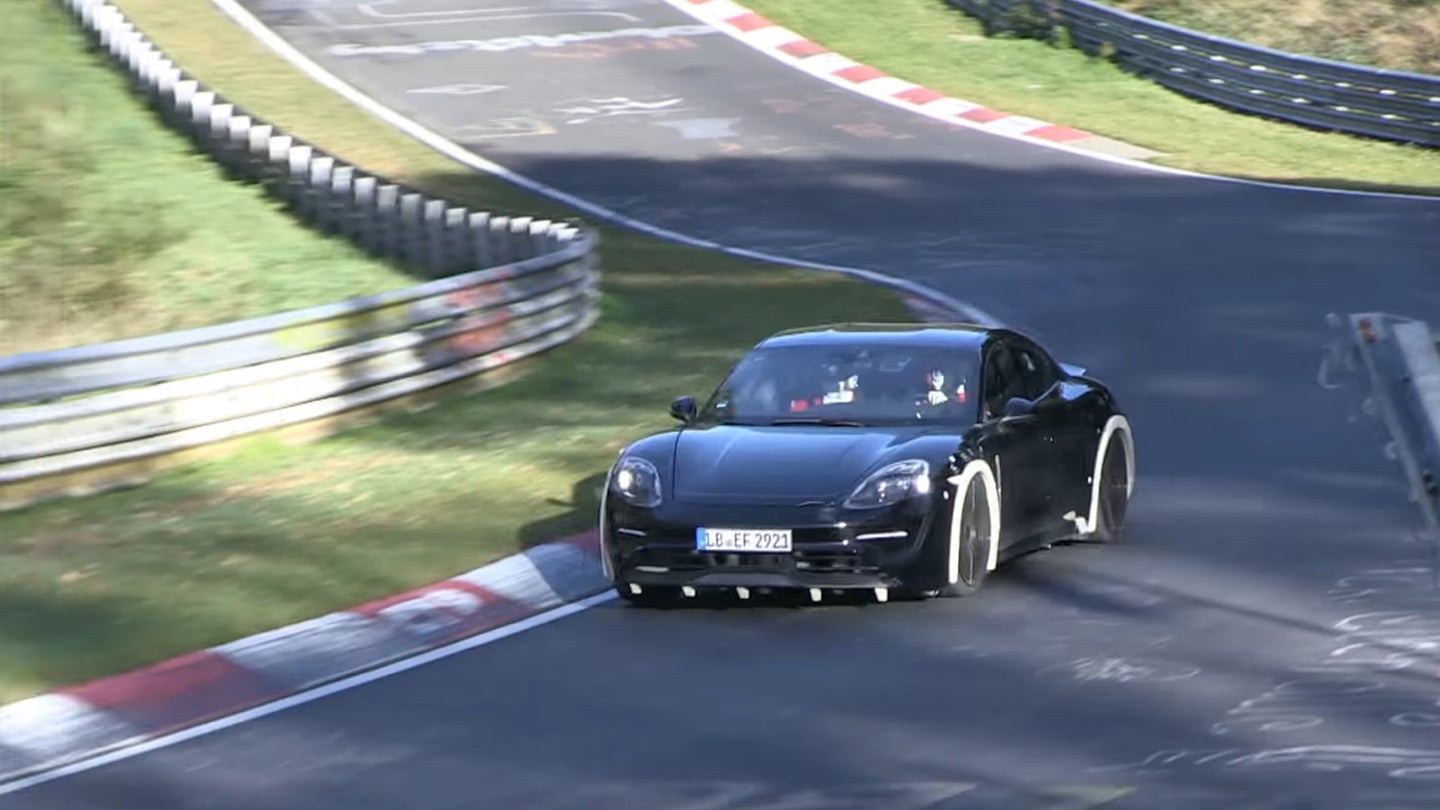 Porsche is the pinnacle of Germany's rear engine, rear-wheel-drive configuration. Its horizontally opposed engines produce gobs of power and noises that are only fit for the ears of a king. With the introduction of the manufacturer's latest platform, Porsche will trade in its petrol power plant for electric motors that hum quite a different tune.

Someone has now spotted Porsche's newest test mule, which we suspect has the Mission E drive train packed into a camouflage shell, doing laps on the Nurburgring. The automaker may be looking to either test its current performance or tune it to embrace the "track-ready" nature that the car is meant to inherit from its ancestors, despite being powered by a battery,

This comes only a month after the prototype was caught testing alongside a Tesla Model S, which some say very well may be the Mission E's biggest competitor. Even though Porsche might not be looking to match the exact specifications of its competitor, let's face it - there will be some market disruption for Tesla with the Mission E in the limelight. Both are similarly priced, meant to be ultra-efficient luxury sedans, and pack one hell of a punch off the line.

The Mission E is really a big deal for the Porsche brand. With its parent company, Volkswagen, attempting to head up the electric market for German cars, it's only natural that its child brands will be getting the treatment as well (even Audi is getting an electric SUV). The difference is, Porsche is a rather unique brand that unofficially represents the market space between Ferrari and BMW, your quintessential "everyday budget supercar," as long as your budget has close to six figures. Oddly enough, the Mission E is a rather affordable entry into Porsche's lineup, costing just $85,000 despite having a 0-60 time closer to the $115,000 Porsche 911 Carrera 4S.

On top of the performance, what we've actually seen of the concept—not the one going around the track—makes the Mission E look a lot more refined than most cars on the road today. Its body has aerodynamics that represents the Porsche name with wide rear arches, sharp edges, and a swooping roofline, while the interior packs a modernized luxurious sports car feeling, complete with flowing dashboard, a plethora of displays, gripping seats, and retro-modern steering wheel.

Porsche is also determined to make the best out of our current battery limitations, offering 350 kWh chargers which would give the Mission E 240 miles of range (80 percent charge) in just 15 minutes.

Does the quietness of the electric motor zipping around the track kill the very soul of the Porsche, or can it inspire purists to reach inside themselves and find a part of their heart which enjoys a piece of the future? Even though we haven't seen the production-ready models testing in public yet, it's reassuring knowing that Porsche is actively working on developing its electrified drive train and truly keeping up to their word on a track-worthy electric car.