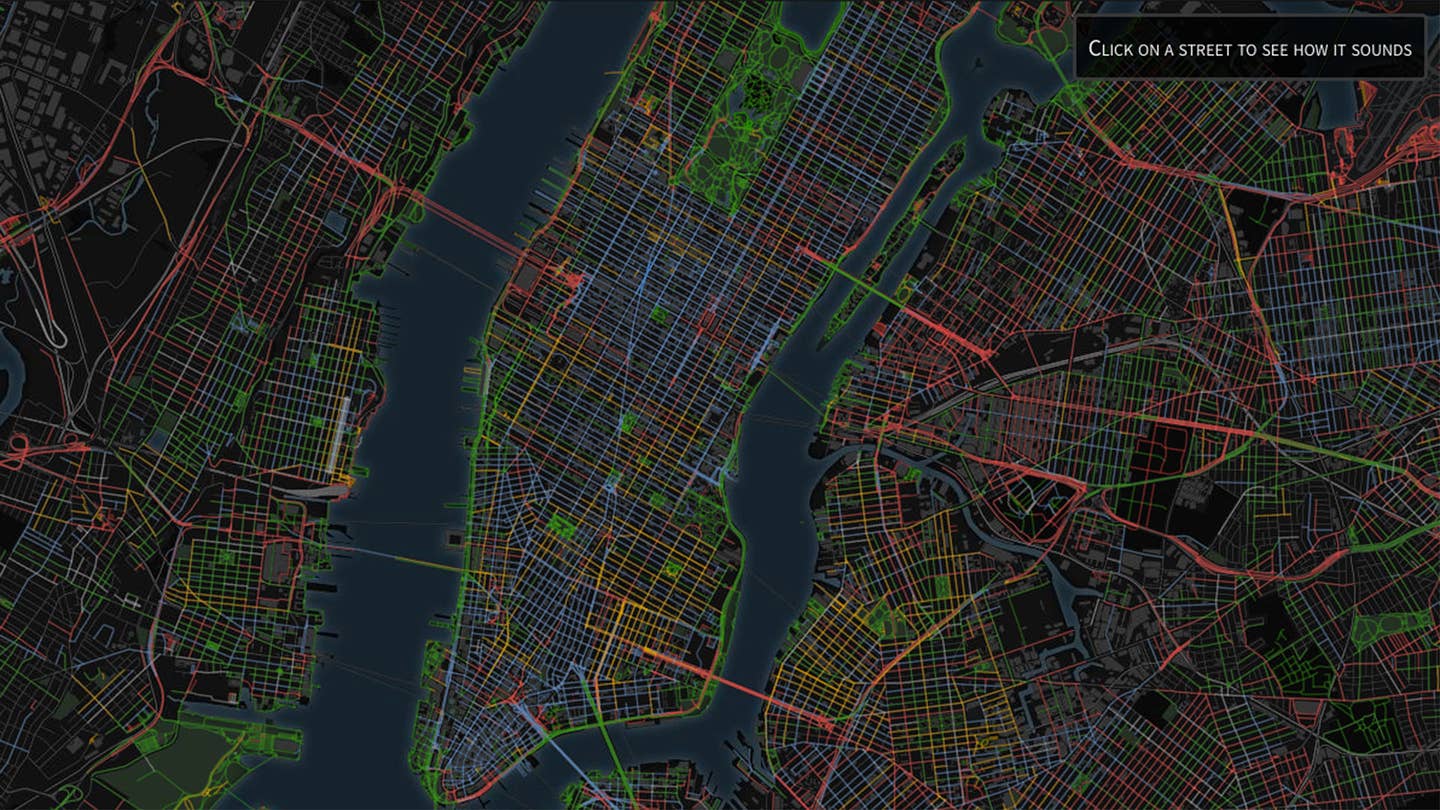 Mapping projects by Good City Life turn big data into the beautiful, fascinating data of Chatty Maps. Daniele Quercia, Luca Maria Aiello, Rossano Schifanella, and Francesco Aletta used an algorithm to scan thousands of Flickr photos for images of 12 cities, pulling data from the photos that were also tagged with sound-related terms. They grouped the library of sound words – like kids, train, church bell, chatter, and drilling – into six color-coded categories: Human Nature, Music, Indoor, Transport, and Mechanical. Then they colored each street in those 12 city maps with the color for their predominant sounds, also adding a spider chart that maps emotional layers to the urban soundtrack.

The result is kaleidoscope wonderland you could play in for hours. The sounds of Tremont Street in Boston are 25.9 percent human. East 17th Street in New York City is 46.4 percent transport sounds. Calle de Argensola in Madrid is 38.9 percent music. If the emotional mapping can be believed then maybe there’s hope for humanity, because nearly every street we wandered was dominated by trust, anticipation, and joy in various measure. Not so much Lee Street in San Francisco, though. A lot of disgust and anger happening there.

The researchers said they wanted to show what can be drawn out of the urban sound landscape beyond using it as a scapegoat for the anguish, fear, and annoyance of city dwellers.

Companion projects include the Urbanopticon, which asks you to pinpoint where in a particular city a Google Maps picture was taken – a game made for delivery people and utility workers. Smelly Maps charts the olfactory presence of emissions, nature, food, animals, and waste (in our brief foray most streets smelled like either emissions or food). And there’s Happy Maps, said to chart “how people psychologically perceive the urban environment.” It’s not up on the Good City Life site, which we’ll take as some kind of metaphor for the difficulty in finding said happiness. Yet according to Chatty Maps, Bear Lane in London would be a good place to begin the search – it is overwhelmed with joy, surprise, trust, and anticipation.

The Helvetica No.1 Smartwatch is new, yet Timeless.

The future of keyfobs is integrated wearables. Here’s another step towards security.

Relive a simpler, louder, ballsier time in F1. Let the nostalgia wash over you. Then sign a petition to bring V-10s back.