The Real Story Behind the World’s First Hybrid Car

If history had been just a little more kind, America's HOV lanes would look a lot more stylish. 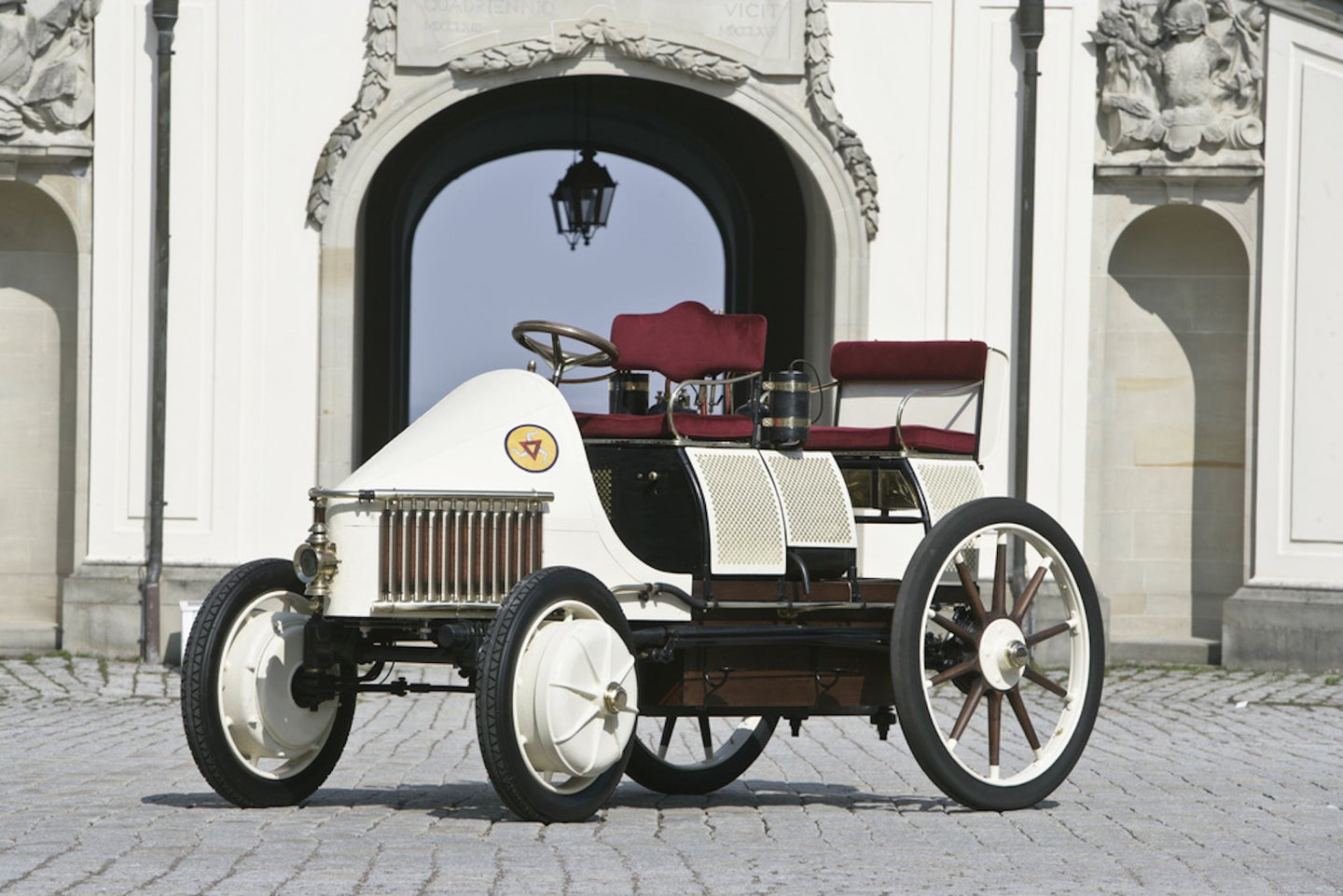 Cruising along HOV lanes, especially in California, you can’t help but notice an endless parade of Prius’s and Teslas, with occasional Leaf and a Volt thrown in. That procession could have had a very different vibe if a certain sports car manufacturer had succeeded with a pioneering effort back in 1901.

In fact, these cars should have all been Porsches.

At the dawn of the automotive age, early automakers competed with gasoline, steam and electric-powered cars. Most were simply motorized carts, and while the undeniable appeal of these primitive "horseless carriages" was exciting, no one knew what the best propulsion alternative should be. To cover their bets, some manufacturers even offered several different power types. But no one offered two power types in the same vehicle.

In 1898, long before his stints at Austro-Daimler, Steyr, Mercedes and Auto-Union, Dr. Ferdinand Porsche engineered a radical electrically-powered hybrid car for Joseph Lohner and Company, based in Vienna.

Electric cars in those early days were not uncommon, but to this day, they have always presented the same challenge: the need for a fully charged battery and a range that was limited to the charge. Early electrics appealed mostly to women. They didn’t require dangerous cranking by hand, they were safe, quiet and enclosed, and in that era, most women only used a car for urban shopping trips and visits to friends. Besides, the chic ladies who could afford an electric didn’t need to commute to work.

Although his strict father wanted Ferdinand Porsche to work in the family tinsmith shop, a curious young Ferdinand—like many people at the turn of that century—was fascinated with electricity. When he was just 13 years old, he built his own batteries and electrified his home and the family workshop in Mattersdorf. Although his angry father destroyed the batteries, Porsche’s mother allowed him to take evening classes at the Staatsgewerbeschule in Reichenberg, after which he began work in electrical engineering. He commuted on a bicycle, for which he built an eight-sided electric motor to drive the rear wheel.

Porsche’s efforts caught the attention of Austrian industrialist Ludwig Lohner. Young Ferdinand was fascinated with automobiles. He saw the potential in electrics and began to develop a front-wheel-drive ‘wheel motor’ that would eliminate the need for gears and a differential. He presented his idea to Lohner who immediately saw a patentable, potentially moneymaking opportunity that could be licensed. Porsche went to work for Lohner, who had a large factory with steam-driven machine tools and craftsmen who could build the machines then 24-year old Ferdinand envisioned.

His idea for an automobile differed from anything on the market. Porsche’s  creation had its electric motors mounted on the hubs of the front wheels. Instead of a battery pack, the Lohner-Porsche used two small gasoline engines to directly power a generator, which in turn produced a supply of electricity to drive the front wheels.  Porsche and Lohner displayed their prototype at the 1900 Paris World’s Fair.

Electric car owners at the time usually had a small charging station in their home garages. Porsche’s idea mounted the charger on the car, so the range capability was determined by how long the engine would run on a tank of gas. Porsche already had an electric car chassis, that he’d used to contest the Semmering-Bergrennen race. He also had a pair of one-cylinder De Dion-Bouton 2.5-hp gasoline engines, which he mounted between the driver’s bench seat and the rear passenger seat.

The exposed engines drove twin electrical generators that powered the front wheel hub motors, kept the car’s batteries charged (to start the engines, to run the ignition and to power an accumulator so there was always sufficient electricity), and drove a water pump that kept the engines cool. There was no need for a driveline because the generator was not mechanically attached to the wheel hubs.

It was the first hybrid – although the term ‘hybrid’ didn’t exist. Porsche instead gave his car a Latin name, Semper Vivus, which translates to “forever alive.”

Of course, there were a few problems. The stodgy prototype had a solid rear axle and no rear suspension. Even more of an issue, its first accumulator required 74 battery cells, which, along with twin engines, two generators, (each producing 90 volts and 20 amperes), the heavy electric motors in the wheels, and the fuel tank, meant the hybrid weighed 1,200 kg, (about 2,640 pounds). Porsche quickly reverted to a smaller, 44-cell accumulator, which helped somewhat.

Cleverness abounded. To back up, the driver simply reversed the electric circuit. The accumulator ensured that any excess electricity was ready on demand. There was room for four or five people, but the exposed engines/generators with their smoke, oil and fumes, would not have been a comfortable situation. And there were no fenders, so the muddy roads of that era would have caused a problem. Lohner and Porsche displayed their creation at the 1901 Paris Motor Salon, even though Porsche, was already planning ‘the next big thing’. Old photos show several variations including one with four-wheel electric hubs.

Taking the Semper Vivus’ drawbacks into account. Porsche’s next Lohner model had just one gasoline engine. It was fitted with an electric starter, and a single shaft-driven generator, running at a constant speed, was mounted beneath the driver’s seat. The second edition was called the Porsche-Lohner Mixte.  (Mixte is a French word, signifying the combination of gas and electric powertrains). Vintage photos show a large, conventional-looking touring car, with front-mounted radiator coils shielded by a low hood. Flared fenders kept passengers dry. Prominent front wheel hubs encased the flat electric motors which had commutators mounted on their outer faces for service access..

Incredible as it seems, the Lohner-Porsche Mixte remained in production, (although its manufacture was moved to Austro-Daimler), until 1915. Its steep price ranged from 14,400 to 34,028 Austrian Krone (Crowns), which translates to $2,900-to-$6,840 in that era – and some $80,000-to-$200,000 in 2018 dollars. Not many were sold. One of the first customers was an entrepreneuring auto dealer, Emil Jellinek, who ordered five 1902 Model Mixte’s for resale. Jellinek, it will be remembered, bought enough cars from Daimler, so they could be named for his daughter -- Mercedes.

Porsche raced his Mixte model at the Exelburg hillclimb in Austria in 1902, winning the large car class. Although the pricy Mixte was not sales success, Porsche was able to demonstrate the dual power system on military maneuvers to Archduke Ferdinand and elite Austro-Hungarian Aristocrats. In time, that would pay big dividends. Meanwhile, Emile Jellinek was transforming antiquated Austro-Daimler into a modern automotive enterprise. Needing a clever engineer, Jellinek hired Ferdinand Porsche as his Technical Director to design a new line of electric and gasoline-powered vehicles. Due to depressed economic conditions, the venture failed in 1907. Undaunted, Ferdinand Porsche would go on to work with Paul Daimler, designing automobile and aircraft engines.

Never one to let a good idea fall by the wayside, Ferdinand Porsche adapted the electrically-powered wheel hub principal for military applications. He later designed powerful “tugs,” that were hitched to trailers equipped with Porsche’s electric wheel hubs. They were able to tow huge artillery pieces up steep mountains, thus gaining a strategic advantage over Austro-Hungary’s foes in World War I.

Automotive history is replete with examples of failed great ideas that were developed decades earlier, but couldn’t be reliably and practically executed. The world had largely forgotten about Porsche’s early hybrid -- but the company hadn’t.

Perhaps to counter all the hype over Toyota’s Prius, in 2011, Porsche AG constructed a full-sized operating replica of the Semper Vivus. A re-creation was built by a Porsche technician, named Hubert Drescher. He worked from old photographs and one surviving technical drawing, and the car was demonstrated to journalists at the Geneva Motor Show. As Porsche had just introduced its 918 Spyder Hybrid roadster, it was the perfect time to remind the world that company founder Ferdinand Porsche had pioneered the hybrid concept more than a century earlier.

Historian Karl Ludvigsen, who’s arguably written more about Porsche (“Excellence was Expected,” “Professor Porsche’s Wars,”) than anyone says, “Porsche was happiest when creating from first principles. This implied risk, but he knew that without risk no gains could be achieved.” No doubt Ferdinand Porsche, aided by his talented son Ferry, had those same thoughts when his then-radical postwar, air-cooled, rear-engine, beetle-shaped sports car was launched in 1948.