This Drone Uses an Origami-Inspired Arm to Pick Up Objects 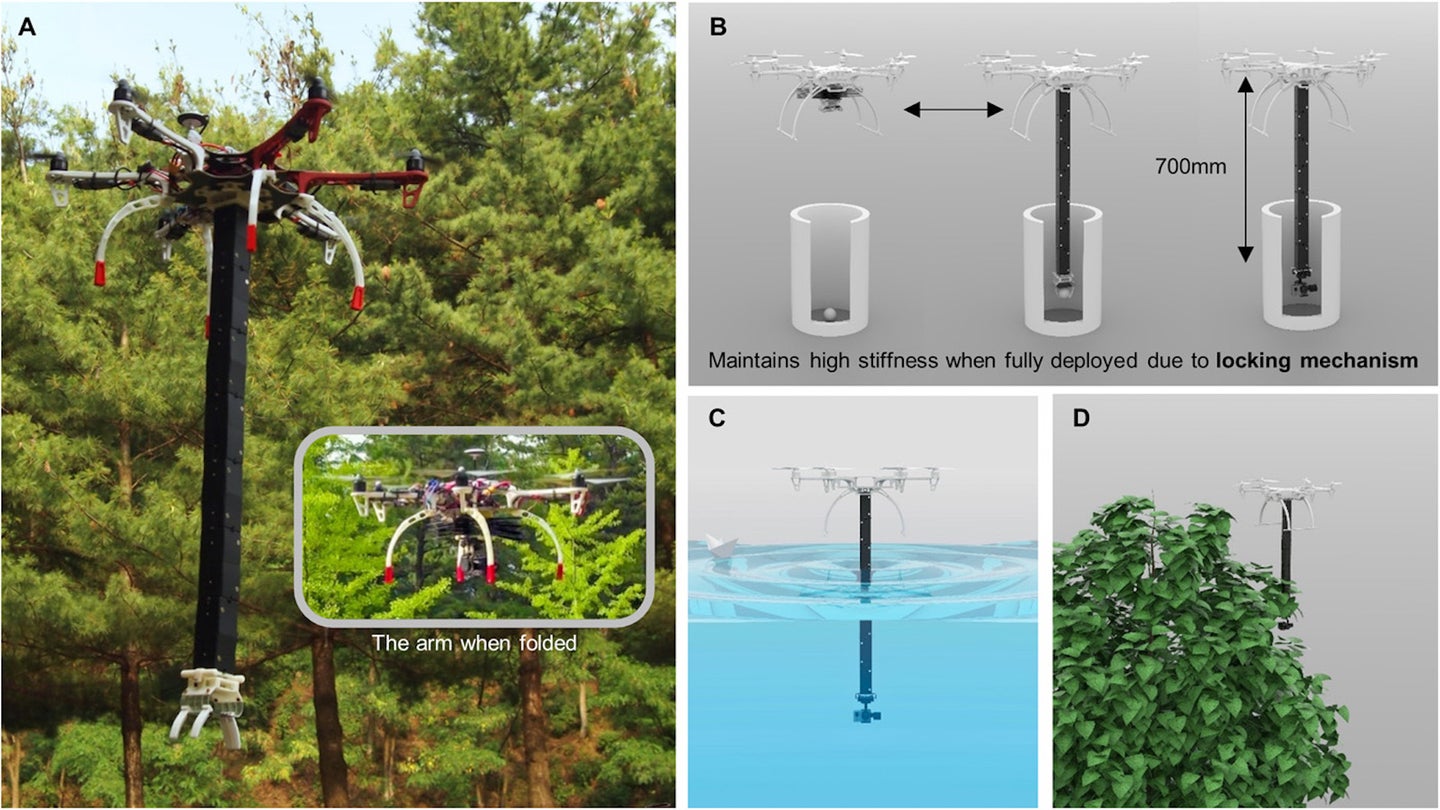 The drone industry is evolving right in front of our eyes, with innovative ideas bursting into the field seemingly every other day in both the regulatory arena and the actual, physical drones themselves. Some propose that drones assist autonomous cars to more safely and effectively navigate busy urban environments. Another company is considering using its UAVs to collect infrastructural data like possible roof damage while out delivering packages, because, why not? Today, it’s the Soft Robotics Research Center at Seoul National University that brings us the latest, inspired drone technology: A robotic arm that easily folds and unfolds and is capable of picking up objects.

This may seem familiar to those of you aware of Amazon’s 2017 patent which proposes delivery drones use a retractable chute to delivery payloads safely onto users’ lawns. This arm, however, is robotic and was designed to pick things up as opposed to dropping them.

According to The Verge, the arm is comprised of seven "actuators," which are essentially stacked, rectangular boxes that can fold in on themselves to save space during flight, and unfold when it’s time to grab something off the ground. To pop the boxes open and create this elongated appendage, the research team used elastic bands within the actuators, resulting in a fairly firm, lightweight robotic arm. Once you’re ready to retract the arm, a basic electric motor and a wire fold the actuators back into their flat, 1.5-inch length. Added to that, the entire arm weighs a mere half a pound (258.6 grams).

But what exactly are the use-cases, here? Well, according to a study published in Science Robotics, this arm could be pretty useful for those in the inspection industry or environmental arena. Naturally, a robotic arm like this is capable of reaching areas the drone itself can’t. The scientists responsible presented that idea by lowering the arm into a small ditch which was much narrower than the drone. With that in mind, it becomes a little easier to imagine scenarios where this arm-equipped drone could be useful.

The study itself mentions collecting samples from crevices, the inspection of pipes, chimneys, and other similarly intricate areas. This could essentially assist in inspection and sample collection, making this robotic arm a drone tool that various industries are surely excited about. While the appendage is currently restricted to extending in one direction only, its creators are keenly pondering how to make an even bendier, compact, and lightweight successor. Stay tuned.