Does Ford’s Self-Driving Police Car Patent Mean RoboCop Is Coming to a Highway Near You?

From Ford’s application for an autonomous police car, many questions arise. 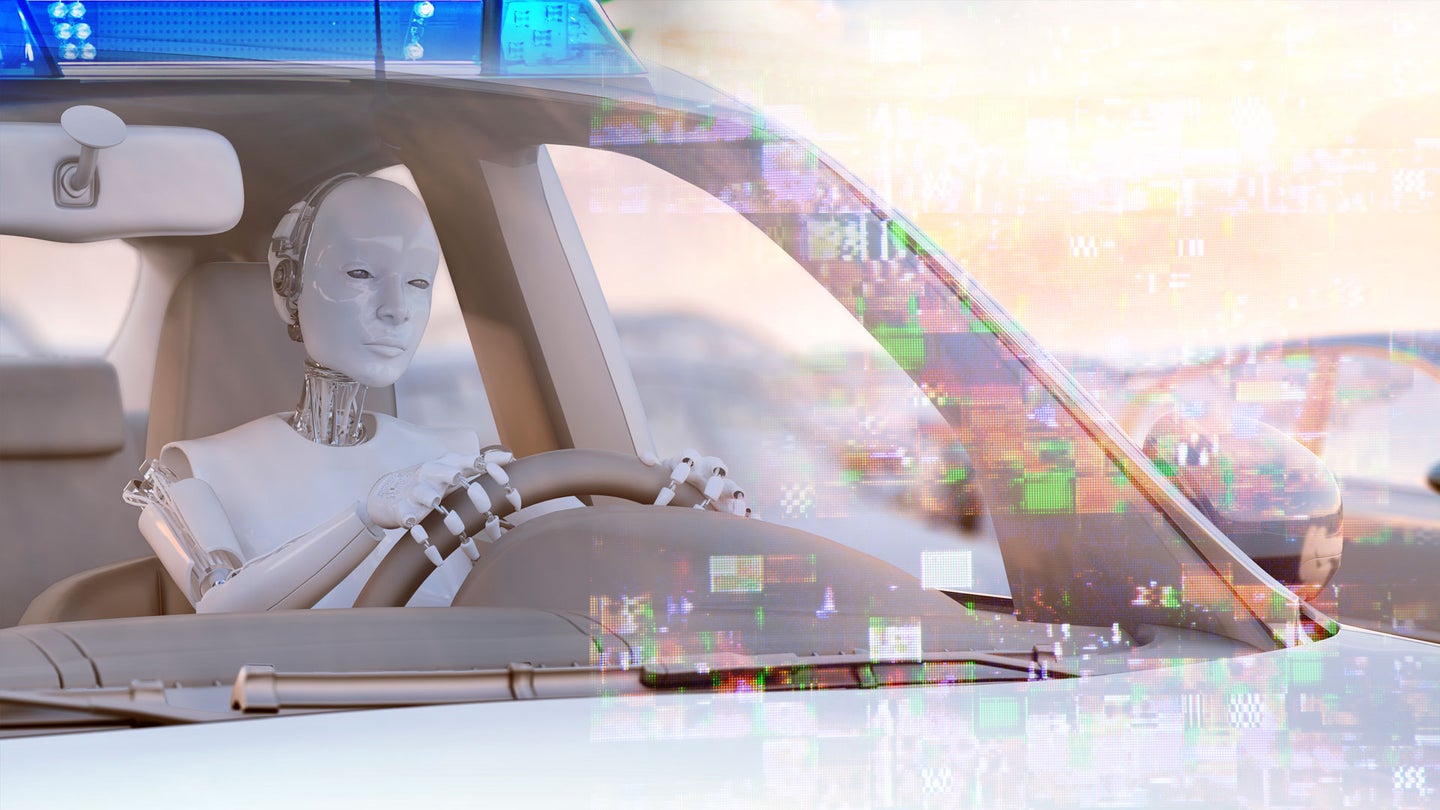 We’re deep into the age of seemingly ubiquitous surveillance and law enforcement. Security systems record our every move in public. Red-light cameras rightfully snag those who interpret the yellow light as a signal to speed up rather than slow down, but the tell-tale flash of a speed camera—arguably more of a revenue-enhancer than a true safety tool—makes drivers' toes curl more often than many would like to admit. Even something as benign as electronic toll collection suddenly acquires an oppressive Big Brother vibe when you accidentally find yourself in the wrong lane without a transponder and you receive a stern, extraordinarily-detailed letter with the date and time of your infraction and a photo of your license plate alongside notice of a fine a few weeks later. Can’t just let that one slide, huh, E-ZPass?

So with all that in mind, do we really need armies of robotic police out ready to ensnare us after every conceivable transgression?  Ford seems to think so. The carmaker filed a patent—published last month and uncovered by Motor1—for an autonomous police car capable of finding its own great places to hide, rocketing off in hot pursuit of all those who thumb their noses at Johnny Law, and issuing citations on the fly. It would be terrifically cool....if not for that fact that it’s going to be actually hunting all of us down like hapless sheep falling prey to whatever horrifying creature Skynet will build once it raids Boston Dynamics.

Nevertheless, the idea was inevitable. And while the initial reaction may of course be a resounding, Lana Kane-esque noooooooope from the already-relentlessly-hounded-and-spied-upon masses, there will be some tangible benefits to just such a system.

“Automating traffic stops would certainly have both advantages and disadvantages,” says autonomy researcher Bryant Walker Smith, an assistant professor in the School of Law and the School of Engineering at the University of South Carolina. “It could reduce safety risks for both officers and motorists.” It’s also a potential force-multiplier for overwhelmed police departments, allowing police to pursue more urgent matters while the robots monitor speeders—something that's basically already happening, courtesy of camera-based traffic monitors.

Of course, robo-cop cars could also start eliminating police jobs in the process, which won’t sit particularly well with anyone. (At least, nobody carbon-based.) Indeed, experts quickly began throwing up more yellow lights than greens for Ford's idea—even beyond the employment-related issues.

“[Autonomous police cars] could also reduce opportunities for valuable educational or investigatory interactions between police and the public,” Smith says. “Besides, there are already far more efficient forms of automated enforcement. Many states have been hostile to some of these, such as speed cameras, while publicly oblivious to others, like license-plate readers.”

Likewise, one 27-year law-enforcement veteran describes the idea as “somewhat concerning” from a police-community relationship perspective.

“Replacing the face-to-face encounter between an officer and a citizen during a traffic stop with an automated, autonomous mechanism seems to imply these traffic encounters are always low-level and routine,” says Brian Acken, a senior law enforcement policy analyst with the nonprofit research institute RTI International. “While many traffic stops end in a ticket or warning, other stops may require the delivery of emergency medical services, result in the initiation of a search warrant, or identify probable cause for an arrest. The point here is that we need to consider all the possible outcomes of a traffic stop and the value that a police officer brings, including their knowledge, experience, and interpersonal communications skills.”

Acken adds that the while the idea of an autonomous police car negates any potential form of officer bias that might be in play when deciding who to stop and where enforcement activities occur, it also removes the ability to exercise any form of discretion or empathy during these encounters.

“Effective data-driven policing requires that we put resources in the most logical time and place to address specific, identifiable issues while weighing community impact and sentiment,” he says. “These interventions include citations or warnings, but also public education accomplished in part while officers are interacting with drivers on traffic stops. Removing this in-person interaction could reduce traffic enforcement to a disconnected numbers scenario, and is likely to result in increased citizen animosity towards enforcement activities, rather than reducing concerns about police-related traffic stops.”

Admittedly, this speculation is about as premature as you can get, and there are no guidelines anywhere just yet about how such systems would actually work. For instance, would robo-cop cars just run your license, or could they call in the human cavalry if you’re being willfully reckless? Do they shoot you a text as you’re driving to alert you that you’ve been cited? Will they follow you until you slow down? Can they take measures to actually stop your vehicle? And who will hold the reins on these systems as their capabilities escalate? It’s a question that goes far beyond just the idea of autonomous squad cars.

“In the future, the placement of all kinds of inward and outward facing sensors on motor vehicles, aerial drones, and infrastructure, plus the connection of these sensors to the cloud, will enable far more aggressive public and private enforcement of all kinds,” Smith says.

But this all may wind up being a tempest in a teapot. Smith adds that he’s skeptical Ford's idea even satisfies the patentability requirements pertaining to novelty and non-obviousness in the first place—though all that means is that Chevy, Dodge, and everyone else can start cranking out robotic squad cars, too. It may also just be a temporary blip on the road to full autonomy. After all, once the rest of the cars on the road are driving themselves, there won’t be much for these bored bots to do. It will, however, be awfully entertaining the first time an empty squad car pulls over an empty passenger car just because one of them had a glitch somewhere in their autonomous operating systems that caused them to a) break the law or b) go rogue. That, too, seems as inevitable as the arrival of a RoboCop itself.