The Scuderia Corsa GTD-class 488 GT3 played out fuel strategy to win on the anniversary of Pete Lovely’s run in 1957. 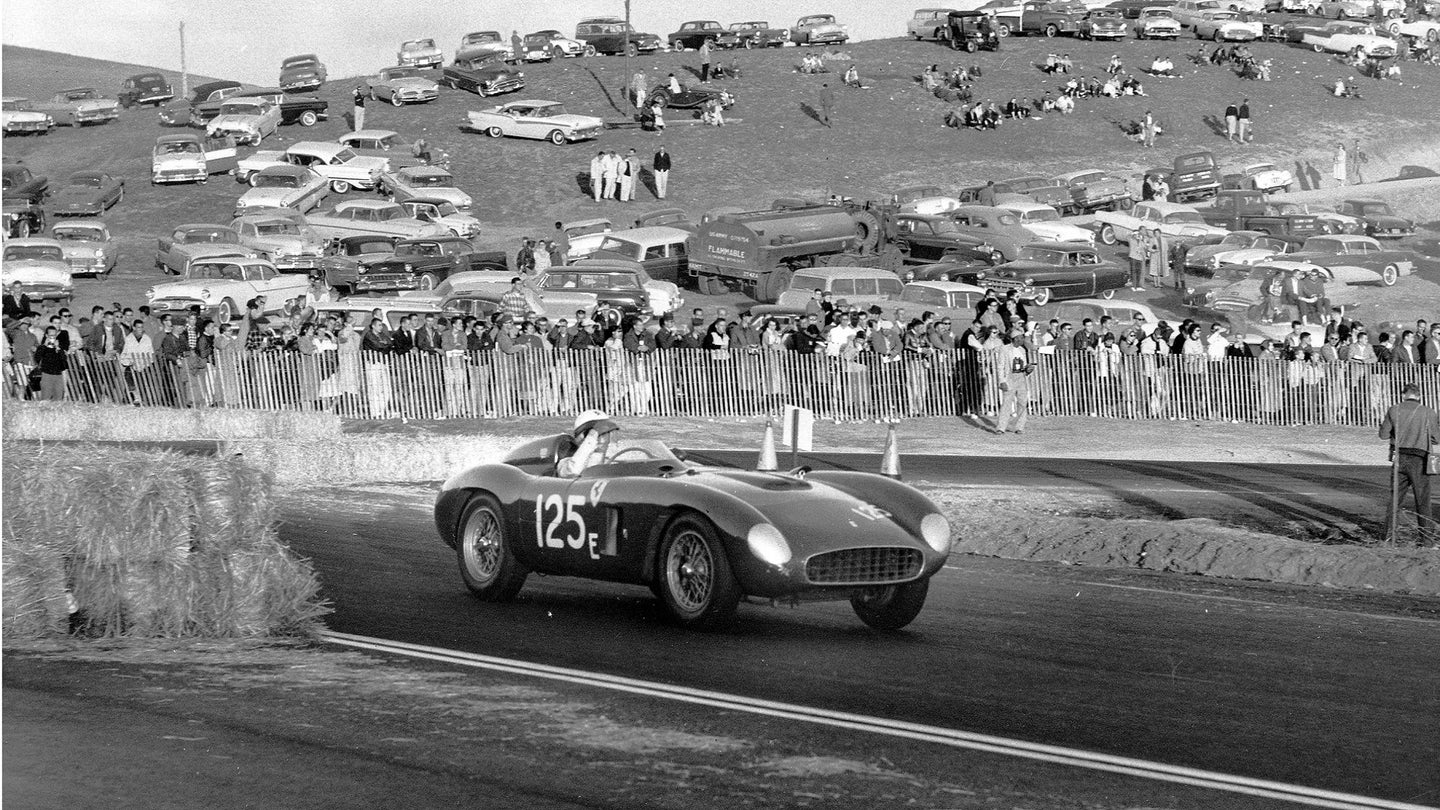 Sixty years ago a freshly built Laguna Seca was ready for perhaps the best drivers in the world to converge and race on its newly paved surfaces. In those days the track was just 1.9 miles long (current length is 2.238 miles), there was no hairpin in those days, there was no iconic "tire" walkover bridge, and what are now known as turns 3, 4, and 5 did not exist. Instead, the track simply curved downhill and connected what is now Turn 2 with what is now Turn 5 in a very high speed sweeping corner. In those days the Corkscrew was just Turn 6, and Rainey Curve was simply Turn 7. The history we know didn't exist then. Before Zanardi, before Rahal, before Andretti, it was just the track.

Montana native Volkswagen dealer Pete Lovely arrived to the newly opened track with a 2.0-liter four-cylinder equipped Ferrari 500 TestaRossa. The prior year Pete had entered a number of events in a Porsche 550 Spyder, and brought that same car to race the 12 Hours of Sebring in 57, though it didn't start and he ended up sharing a Corvette. Shortly afterward, Lovely purchased the 500TR for the remainder of the 57 season. Though the car was already a year old and had been raced nonstop since it was built, Ferrari had built a proper racing car in this one. Even though the field was packed with talent, including such names as Jim Hall, Carroll Shelby, Fred Knoop, and Johnny Von Neumann, it was Lovely that came out ahead in a major upset. This race, the first ever run at the now famous (Mazda Raceway) Laguna Seca was Pete's first victory in over a year, and a huge piece of history for Ferrari and the track.

Last week we were at Laguna Seca with our resident photographic genius Keiron Berndt in hopes to see Ferrari repeat that victory on the 60th anniversary of sports car road races at our definitive favorite NorCal track. The Scuderia Corsa team has been very consistent all season long, and as a result are leading the championship, but prior to this very special victory, had yet to win in 2017 - Though they've racked up seven podium finishes. The team made use of a very intelligent by putting their Silver driver Christina Nielsen in the car for qualifying. The person who qualifies the car is required to take the green flag the following day, and she'd put in a respectable time to put the Ferrari 9th on the grid (Meanwhile in GTLM, Risi Competizione put their 488 GTE on pole).

Sunday's race, the penultimate event of the IMSA season, started with Christina at the helm of the Ferrari. She set a decent pace, and did a good job of avoiding clashing carbon fiber with anyone else. With an Am driver required to drive a minimum of 45 minutes, she exited the car at the end of the first fuel stint, just before the one-hour mark of the two-hour-and-40-minute race. While she drove the car up to has high as 6th in class, by the time Alessandro Balzan had exited the pits he found the car back in 9th and set off on a blinding pace to chase down the leaders.

Scuderia Corsa team owner Giacomo Mattioli: "It's an honor to be able to represent the Ferrari brand. I was born and raised in Modena, and I worked at the factory, so obviously I have it in my blood!"

#63 Scuderia Corsa driver, Alessandro Balzan: "It's really really special. It's great to drive the 488, no doubt it is my favorite machine... This was the first track I race at in the United States, so it is very special for me."

In the course of 45 minutes Balzan, driving as though possessed by some forced-induction deity of motorsport, made his way up to third in the GTD category. Thanks to a premium fuel strategy and some excellent driving, Alessandro set about running a masterclass on fuel savings. It was stunning to watch Balzan's patience sitting in third for nearly the final hour of the race. He knew he was the fastest car in the field, but was able to combine an ability to find speed and an ability to save fuel in order to set out a winning strategy. With 10 minutes to go, the #63 Ferrari sat in third behind Colin Braun's Porsche in first and the Turner Motorsport BMW second. At the 6 minute mark, the BMW M6 was forced to pit for a splash of fuel, elevating Balzan up to second within eyesight of the lead. It looked like Braun would be able to coax his Porsche around for the full timed distance of the race, but then he was also called in to top up on fuel with just two laps remaining in the race, which handed the lead to Balzan. Chasing the lead for two hours and 36 minutes, the #63 had finally moved into the lead.

The team weren't sure the car could make the end of the race on fuel, and decided to take a risk and gamble on Alessandro's ability to lift and coast as much as possible. Luckily, if there is any track in the world where you can save fuel well, it's Laguna Seca. The second half of the course is essentially all down hill, and you only have to keep enough fuel in the tank to make the drag up to the start/finish line halfway through main straight. Their nearest competitor was 7 seconds behind and also trying to save fuel, so they only had themselves to beat.

The clock ticked down to the end, and some-how-some-way, Ferrari made it across the finish line still in the lead. It was an unbelievable finish to an unbelievable race. The team hadn't seen the lead all day, but persevered and used the ultimate strategy to bring home the 60th anniversary victory. An emotional Balzan later went on to say "I really feel like this is a family for me". Pete Lovely welcomes you to the family, Alessandro. Well done to the Scuderia Corsa team, you deserve a pat on the back for that one.

Apparently miffed at his team’s woes, Marchionne said both Ferraris could have won the race.

Here’s a glimpse at how priceless classic cars get ready for the historic racing event.