A Driver’s Guide to Barcelona

Late nights and lively culture make this Spanish city a highlight of our record runs. 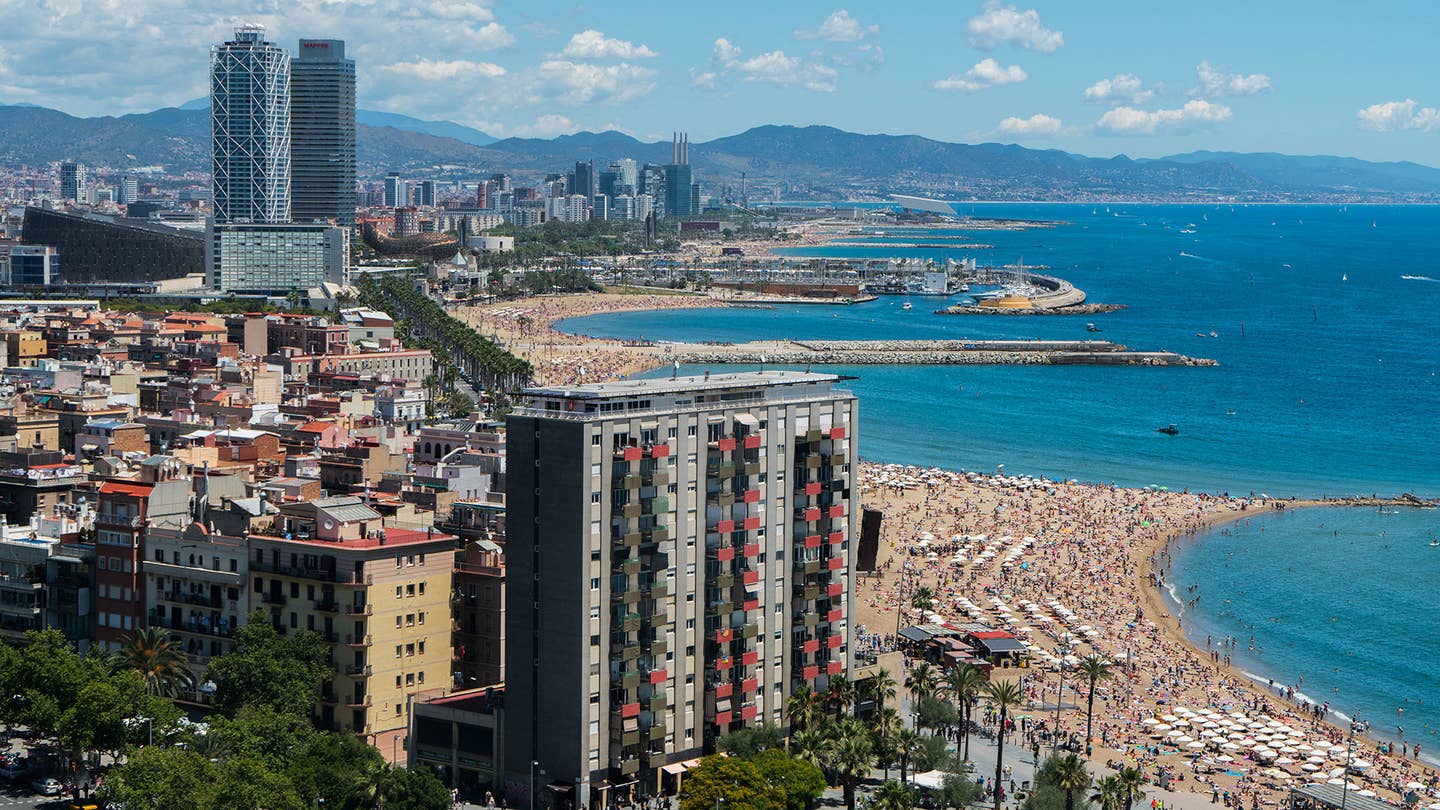 Barcelona makes a strong case for itself on a Sunday night. Street vendors sell knock-off soccer shoes just feet from yachts. Boisterous diners stay out for hours in tapas bars. A dance breaks out in Parc de la Ciutadella—a bolero, under a full moon. The tic-toc, tic-toc of a nearby ping-pong game is faintly audible over the music and the shuffling of slippered feet. It’s midnight, and things are just getting interesting.

With perfect weather, unbeatable nightlife and culture that often overshadows all of Europe, new and old, Barcelona is the perfect starting point for a record run across the Iberian peninsula.

Montjuïc looms over Barcelona’s harbor. It’s a spectacular destination, a great first stop to get the lay of the land, to enjoy a sunrise or sunset. Home to the Palau National, several olympic sites and a historic fortress, Montjuïc is also holy ground for motorsports fans. The twisting roads of the Montjuïc have a racing heritage that dates back to the early 1900’s, and the official course eventually hosted both the Spanish Grand Prix and the Spanish Motorcycle Grand Prix for a glorious stretch during the 60s and 70s. The track was savage, equal parts fast and tight, all over comparatively poor surfaces. For all its unpopularity with drivers, the race was a fan favorite for its drama. Tragedy struck in the 1975 Grand Prix, the deaths of four spectators leading to the abandonment of the circuit. But an outline of the course remains today. Combined with Montjuïc’s spectacular views, it’s a family-friendly stop for any racing fan.

Traveling from Montjuïc to the beachy neighborhood of La Barceloneta, Barcelona’s bright red Port Vell Cable Car, or Transbordador Aeri del Port, will carry riders for a silent and rather thrilling ride over Barcelona’s bustling port. Just two gondolas ply the route, passing each other inside the beams of Torre Jaume I, the first of two giant towers supporting the system, which dates back to 1931. The small cabins and spectacular views mean long lines if you visit any time after noon, but the ten minute ride is worth a little wait.

Navigating a car through Barcelona tests the patience of even the most practiced drivers. Combine traffic and medieval streets with a certain Spanish disregard for order and the result is a city that rewards those that tuck any precious sheet metal into the garage. Instead, the locals rely on the humble scooter to get around. Available by the hour, day, or week, scooter rentals are cheap, hysterical, and the perfect way to navigate the city. We picked up a little white Peugeot from rental firm Cooltra for our visit, but a quick wander around La Barceloneta can land anything from modern Yamaha’s to vintage Vespas. Worth. Every. Penny. Bring summer-weight riding gloves, your international driver’s license and prepare to park anywhere you please.

If there’s a more decadent way to start the morning, we’ve never tried it. Churros are a classic Barcelona snack food. They’re fresh and available all day, a perfect replacement for donuts and coffee when exploring the most exciting and vibrant city in Spain. In Barcelona, the star-shaped pastries are a little smaller than the Southwestern American or Mexican treats. But what they lack in size, they make up for in flavor. Instead of a dunking in cinnamon and sugar, the locals here dip their churros in a viscous and intense hot chocolate. It’s a heady combination, and one that’ll stick to your ribs whether you’re navigating Barcelona’s winding streets or bright, sandy beaches.

The Night that Never Lets Go

If Barcelona has a reputation, it’s for late, affable nights. There’s no better way to experience Barcelona than letting it take you. Abandon all ideas of getting home at a reasonable hour, or of arbitrary dietary restrictions. Ask a local to point the way to a good meal and see where you wind up. Many will point you toward the well trodden Plaza Real in the Gothic Quarter. Just off La Rambla, Plaza Real is a favorite of tourists and locals alike for its mix of restaurants and nightclubs. The Plaza is arranged around a well-photographed central fountain, but most tourists wander straight past the intricate street lamps designed by Antoni Gaudi. As the night continues to take shape, consider aiming yourself east, toward the pastrami bar at Paradiso. The spectacular little hideaway in El Born has a speakeasy feel, with the bar and restaurant tucked behind an antique refrigerator door. It’s a great place to build momentum for exploring Barcelona’s nightlife, but be forewarned: Paradiso’s smoky cocktails and smokier meats are so good it might just become your last stop of the night.

Setting Records: Across Iberia in the Volvo S90

Our team sets the record between Barcelona and Lisbon.

The perfect backdrop for any car.

Rewriting history on a historic road through the French countryside.

A day in the life of Sweden’s southern cultural center.