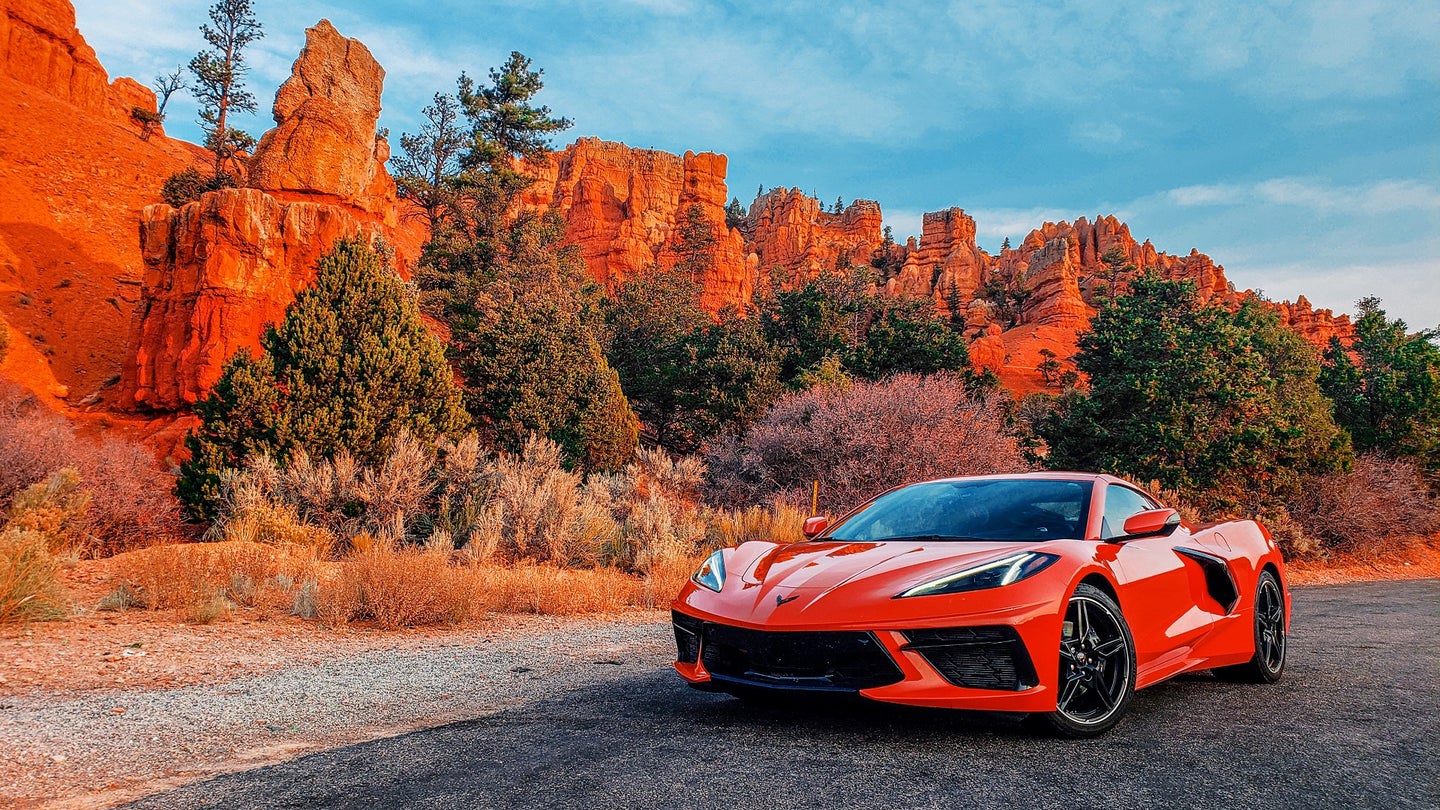 Pretend, for a moment, that you just took delivery of a brand-new Chevrolet Corvette C8 after a 14-month wait. What would you do? Perhaps you’d take it to the nicest restaurant in town, toss the keys to the valet, and leave your sunglasses on as you saunter inside. Or maybe you host a “Welcome Home” party for your new ride so your friends can check it out. But it’s a pandemic, and those scenarios are not happening. So 27-year-old mechanical engineer Michael Digiorgio decided to take an epic solo road trip to visit some of the best driving highways in the country in his new ride.

Digiorgio’s goal was to see as many iconic driving roads, scenic routes, and National Parks as possible in only 19 days. In those two-and-a-half weeks, he chased Porsches on the Pacific Coastal Highway, traversed snow and dirt roads near the Grand Tetons and Cascades, took high-speed runs in the deserts outside of Death Valley, and saw grizzlies, coyotes, and bison in Yellowstone. Using the limited trunk and frunk space of the C8 effectively, he packed his old shape-flexible football bag with enough clothes for the trip, another bag with car care supplies, his backpack with his camera gear and tech equipment, and an assortment of must-haves like bear spray, water, emergency blankets, flares, and a knife. And he set off from Ohio across I-70.

Digiorgio hadn’t put much thought into buying a C8 because, he told me, “I’m a young guy and didn’t think that I could have my first Corvette for a while.” He caught the launch video of the C8 in July of 2019 and was hooked; he handed over $1000 to order one in Sebring Orange a week later.

The path to receiving his new car took a lot longer than he expected. First, the UAW strike added two months to delivery. Then the pandemic hit, and supply-chain issues slowed the timeline to a crawl; even a Georgia lottery winner couldn't get a C8. Digiorgio had started saving up his vacation time, putting in overtime and weekends in order to travel to a string of auto shows. Once the coronavirus caused the cancellation of all of the shows he wanted to attend, he pivoted and started planning a solo vacation in the way he knew best as an engineer: with thorough attention to detail to every single stop along the way.

Starting from his home in Centerville, Ohio, Digiorgio headed west on I-70 and stopped outside of St. Louis on his way to Colorado Springs. The first major highway he wanted to hit was Pikes Peak, a 19-mile trek that starts at 7,400 feet and climbs up to 14,115 feet. Digiorgio says it’s “a pretty wild drive… it’s like driving to the moon.” From there, he continued northwest to the Grand Tetons in Wyoming and Yellowstone, stopping just northeast of Yellowstone. He had to skip Glacier Park to avoid the snow, and went northwest to Washington via Wyoming, Idaho, and Montana. Then he drove the Cascade Loop from Winthrop all the way to Oak Harbor, hopping on a ferry to Olympic National Park.

On his way south, he toured Crater Lake National Park, passed through the Redwoods then made his way down to Monterey on Highway 1, where he tried to talk his way into a few laps on Laguna Seca. He almost had a shot at it but a private Porsche club was on site and they didn’t welcome a Chevy encroacher.

Based on his meticulous plan, Digiorgio left his hotel at 6:30 each morning and stopped for the night at around 8 or 9 p.m., logging about 500 miles a day. Most nights, he had a candy bar or snack food from the hotel, but he enjoyed one tasty filet at the MGM Grand in Las Vegas while he got a quick oil change. From there, it was Death Valley, the Grand Canyon, Bryce Canyon National Park, Capitol Reef National Park, the Grand Staircase monument, Arches National Park, and then Moab, where a Jeep convention filled up the hotel where he was staying.

“The car performed really well as a grand tourer, which I didn’t necessarily expect,” he said. “It was actually really comfortable and wasn’t super loud on the roads; I didn’t have ringing in my ears or anything. This is my first real sports car, and it’s everything I hoped it would be and more.”

Digiorgio is off the road now for a time, and while he had a spectacular trip, he says he is not going to put the C8 through its paces like that again.

I'm thinking he may have a future in road-trip planning because his photos and video are drool-worthy. Spending 19 days behind the wheel of this machine in some of the most scenic parts of America sounds like a pretty good vacation to me.

Got a tip? Send the author a note: kristin.shaw@thedrive.com