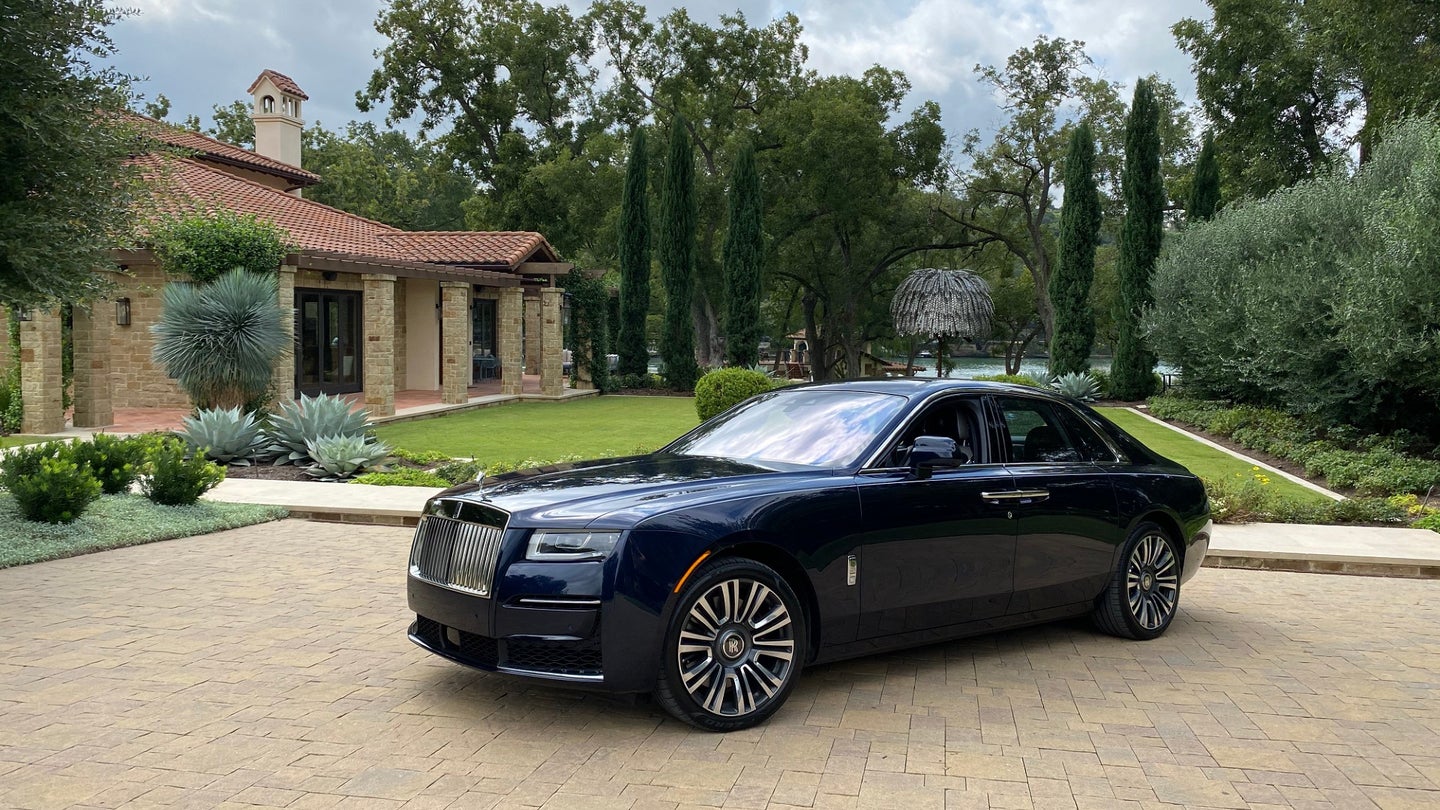 Here’s an interesting fact: at least three Rolls-Royce vehicles are named after weightless entities—Ghost, Wraith, Phantom. But in reality, they’re supremely heavy vehicles. The 2021 Ghost has a curb weight of 5,730 pounds (2,599 kilogram in its home of Goodwood) and the Phantom slightly less at 5,644 pounds. With so many automotive companies in the mainstream focusing on shedding pounds to reduce fuel consumption, the Ghost doesn’t care about trivialities like that. I mean, it’s expected to get 10 miles to the gallon in the city, so fuel economy is not a top priority. However, Rolls-Royce does pay attention to the weight as it relates to its “magic carpet” ride.

Engineering lead Jonathan Simms told us they needed something with the appropriate scale without reinforced sections that would have been prohibitively heavy for the Ghost. The structure of the Ghost starts with its aluminum space-frame architecture, which is made up of extruded box sections with space inside designed to nestle components safely within it.

“If you’re putting in 100 kilos of sound dampening, you need the base of the car to be as light as possible,” he said to The Drive. “It also has other huge benefits. One is the fact that with these open sections within the body, you can install the speakers right into the space and save room in the cabin.”

When building a house, at least in England, a framework with a lot of walls used to be standard. More and more, Simms explained, modern construction sees most of that type of structure in the outer skin while girders run through the house and create ductwork.

Within the car, it’s similar. Two long chassis legs run in front of the firewall for crash performance.

“The structural element in front of the car really hinges on these two beams,” Simms said. “Everything you see externally hangs off those parts. The way we’ve done it is with core strength; the visual aesthetic then is much freer to do what you will.”

If you stand behind the Ghost and view it at a three-quarter angle, the car almost tapers to a point. Traditionally, that wouldn't be possible because the underskin would have required much more reinforcement. The legs wrap the body beneath the passengers and add stiffness. Paired with the elements of the space frame, it supports the car with filaments much like a spider web.

Simms likened it to the human body—if you only work out your arms or legs, your core won’t be very strong and you’ll be just around the corner from significant injury.

The Ghost has six-pack abs, in other words.

What gave Simms and his engineering team headaches with the new Ghost was the construction of the body. For example, the Spirit of Ecstasy now emerges straight through the hood and looks very clean, barely breaking the smoothness of the surface. They also wanted a distinctive eyebrow that lined up and had to perfectly wrap around the grille. In order to achieve a streamlined body devoid of shut lines, four craftsmen weld the body together at the exact same time to ensure a perfectly continuous seam.

“The bonnet tips up and flows into the A-pillars, which doesn’t sound like something that would keep you up at night but it has to be perfectly hand-finished and has to line up with no place to hide variation. It was incredibly complex," Simms noted.

The peak of stress in the Ghost-building process came surprisingly late, when challenges become more difficult to surmount.

“COVID hit around March, and we started testing vehicles that were not camouflaged and we still had things to improve,” Simms said. “We had to keep the team in work mode. The test car looked ready but if we’re not careful, the panic would start to rise because we knew we still had work to do.”

Many key elements of the Ghost are new, including the brilliantly engineered rain channels along the tops of the coach doors. The brand calls this vehicle its most successful product in its 116-year history, which brings a level of pressure for the craftspeople at Rolls-Royce.

“When you go through a journey like Ghost and you spend five years on it, you don’t look at the good points,” Simms mentioned in closing. “Once it’s perfect for the way you want to present it, you move on to the next thing and you end up dreaming about all of the things you got to work on. It becomes a really strange journey in which you’re almost weighed down as you’ve been working on improvements. Then you have this moment when you take a breath at the other side.”

Someone’s not afraid to get sand in their light-up Spirit of Ecstasy.