You may know it as a Boilermaker, and the Koreans used to call it Somaek. Now, it's a Tesla, and it'll get you absolutely totaled. 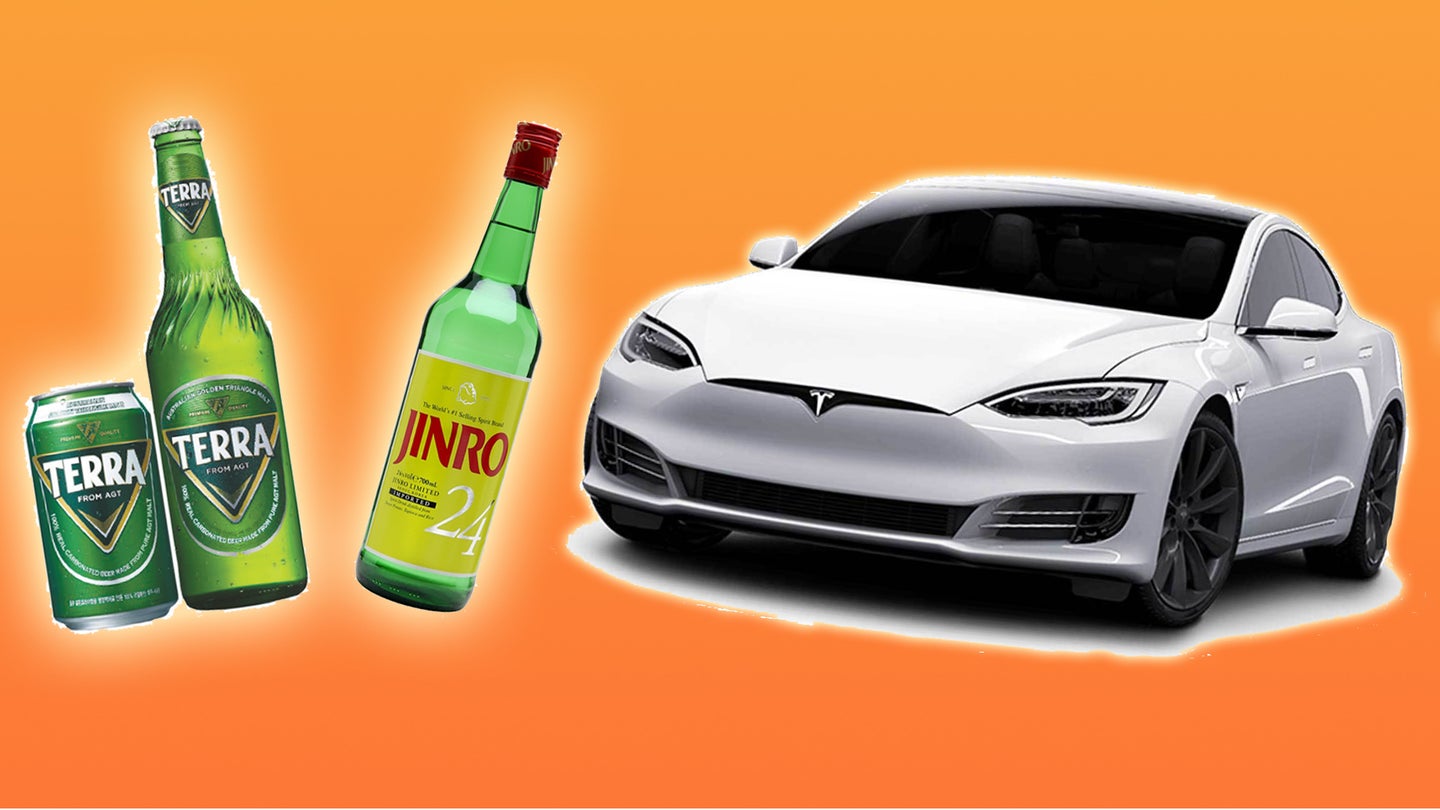 Let's be clear about one thing: there is no such thing as a self-driving car, let alone a self-driving Tesla. No matter what its CEO Elon Musk may say, Tesla lags behind rivals like General Motors (and soon Ford) in making a hands-free highway driving system that uses cameras to make sure the driver is really paying attention. But it's backed by a hype machine that has no equal, which is why Tesla is, at last, making a splash in South Korea, where liver-strong techies have reportedly rechristened one of the country's signature cocktails in Tesla's name.

According to a Reuters story on the company's inroads on Korea, a cocktail's new "Tesla" name is a portmanteau of Terra—a light lager—and soju; a smooth, often sweet rice spirit. How those two come together to form the name of a certain California-based automaker isn't quite clear, though having personally consumed several Kopstootje (the Dutch equivalent made with jenever) in a hostel basement bar while working up the courage to sing karaoke, I can see why Koreans would find such a drink appealing.

Known to Americans as the Boilermaker, the Germans as the U-Boot, and Russians, the Yorsh, the pairing (or dunking in) of a shot of grain-distilled liquor and a pint of beer is one of the world's simplest cocktails. It tastes good, goes down easy, and depending on the strength of the ingredients, can get you absolutely shelled in no time. Koreans have long enjoyed this concoction as a drink called the Somaek, though now that orders for the Model X are piling up in Korea, Musk stans have reportedly helped get the drink rebranded in honor of their favorite car company.

So, I decided to try out Korea's Tesla cocktail for myself, though sourcing the ingredients proved trickier than you might imagine.

The soju itself was easy; a bottle of unflavored Jinro was easily found on the shelves of a local liquor store. Terra, on the other hand, turned out to be next to impossible.

As of spring 2019, demand for the new, Millennial-aimed "clean" lager outstripped demand according to Korea JoongAng Daily, and it would appear its producer HiteJinro hasn't found the chance to distribute it stateside, as no retailer I spoke to could source the stuff. Therefore, I reasoned the staple product from its manufacturer, the eponymous Hite beer itself, would make an adequate substitute. It too is a lager, one with a Budweiser- and Coors-like rice-based mash, with a light taste and an ABV of 4.5 percent, just marginally higher than the Terra it is to stand in for. And, following a Somaek recipe published by Supercall, I took the plunge.

How is it? At the recommended 7:3 beer to soju ratio, it came out a tad sweet, subtly malty, and hazardously light for a beverage that drinks like a light beer, but hits like a normal brew. Otherwise, it's a solid stand-in for a beer, and as such isn't especially interesting for a cocktail.

At only five ounces, it disappears quickly, though it'd still be no kick to the liver if prepared as a double. If extra complexity is desired, substituting one of the many fruit-flavored varieties of soju for the plain stuff could be a fun twist, as could a few drops of orange bitters.

But if getting sauced is the goal, using something stronger than Jinro at its paltry 20 percent ABV would be the ticket. Even so, it'd remain the kind of beverage that'd be easy to drink nightly, or down eight of in succession, only to find yourself worshipping the porcelain god or posting things to Twitter that you later regret.

As tributes to Tesla go, it's a fitting one.