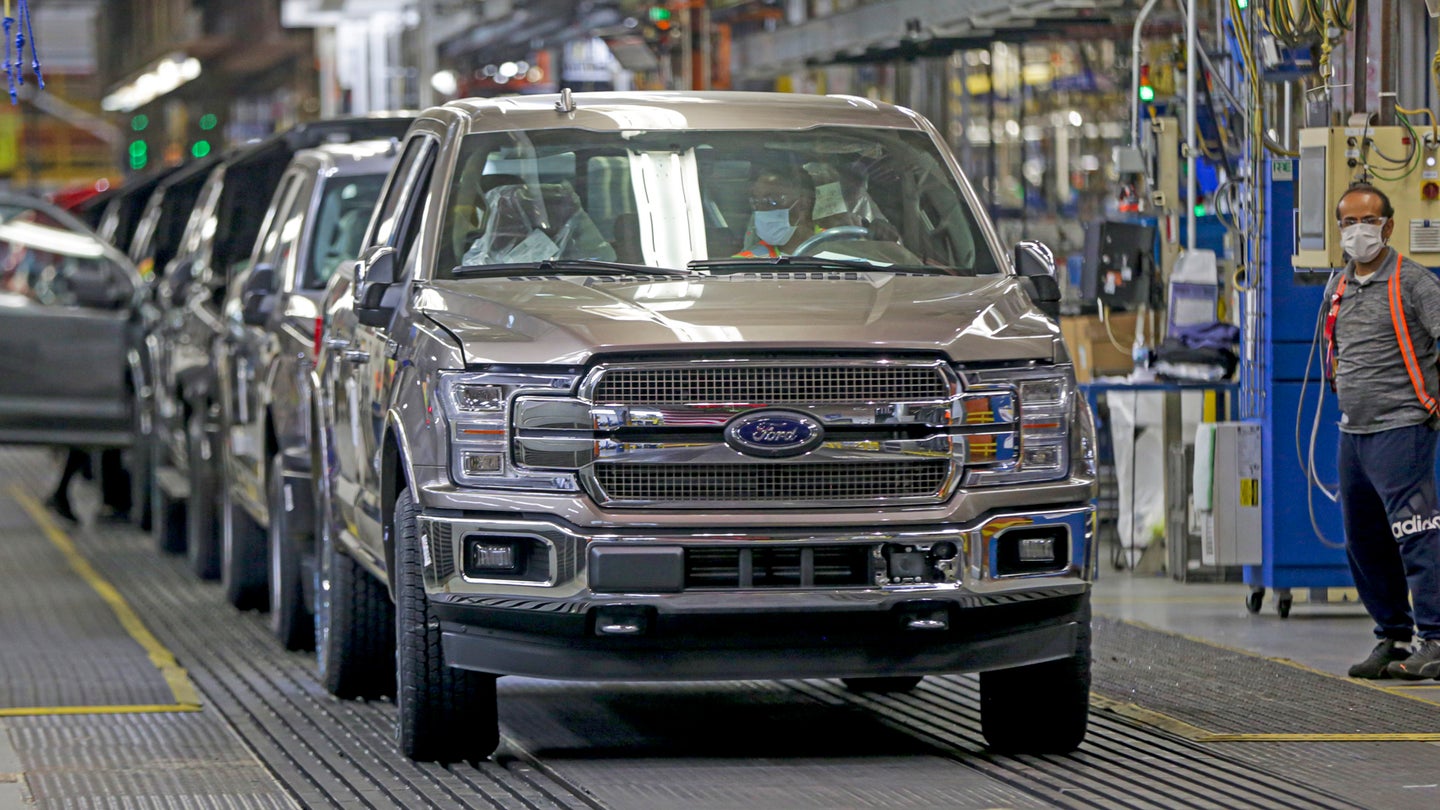 Good morning and welcome back to Speed Lines, The Drive's morning roundup of what matters in the world of cars and transportation. Today we're talking about challenges on two fronts at Ford and why truck plants are so crucial right now.

The Big Three American automakers started production again this week with extreme safety measures in place, but coronavirus reinfections among workers—and delays in production over supply chain issues—are unfortunately inevitable. Yesterday was only Wednesday, but already two critical Ford plants had to hit the pause button.

Ford had to temporarily close its F-150 plant in Dearborn, Michigan after one worker tested positive for COVID-19, according to the Wall Street Journal and other outlets. Workers were sent home, but production was expected to resume after a deep cleaning at part of the plant. Additionally, Ford's Chicago plant—which makes the Explorer and Lincoln Aviator—had to close down twice in the same day after two COVID-19 cases were discovered at a nearby parts-assembly facility. That plant too was back in action by Wednesday night. (Interestingly, the only automaker that has not had a known COVID-19 case this week is General Motors.)

As I've written before on Speed Lines, American auto manufacturing isn't just a crucial part of the economy and the source of livelihood for millions of people. It will also be a larger test case to see if complex, wide-scale manufacturing can resume without more deaths, illnesses and disruptions to the business. A few days into this, it's hard to say whether what happened with Ford will be the new normal for a while or not, but once again, getting these plants up and running will not be as simple as ordering people back into factories and flipping a switch.

The Dealers Cry Out For More Trucks

For Ford, it's especially bad news that these delays happened at the Explorer and F-150 plant, further pushing back its two most crucial vehicles. (Sorry, Mustang fans, you're just not that important.) For the U.S. automakers especially, strong truck sales have been the lone bright spot amid several months of sales downturns, but many dealers are starting to get nervous about their inventories. Even if sales are down, and they are, the bigger problem eventually will be no new vehicles rolling off assembly lines to replace the ones that do sell.

This inventory issue is, of course, true of all automakers, including Fiat Chrysler and GM. Here's Reuters on how dealers are getting nervous, especially GM ones—that company is still working to catch up from the 40-day United Auto Workers strike last year:

Mike Koval, interim head of the Ram brand at FCA, said inventory of certain versions of its Ram trucks were “running a bit lean” but the automaker was focused on boosting inventories in states where dealers have stayed open throughout the coronavirus outbreak.

Carl Moyer, owner of Karl Chevrolet in Ankeny, Iowa - the second-largest Chevrolet dealer in America with sales of 4,000 new vehicles a year - said he started off the crisis heavy on inventory. That cushion is gone, he said.

Asked when he would start worrying about getting new trucks from GM to replenish his supply, Moyer said simply: “Today.”

Trucks are the profit centers for the American car companies, and if they can't start getting more of them in stock, this year will prove to be even worse than expected.

Speaking of Ford, President Donald Trump will visit a cautiously reopening Michigan today. While there he'll visit one of the automaker's plants in Ypsilanti that's currently making ventilators.

Under normal circumstances this would be little more than a nice photo op, but this is Trump—whose approach to the pandemic has been frequently baffling—and a state that's run by Gov. Gretchen Whitmer. She's both a Democrat he's often sparred with and the target of aggressive lockdown protests. And there's already been a big to-do over whether Trump will wear a mask inside the plant, as is required of all employees and visitors. State officials have asked the president to wear a mask, but Ford says it won't force him to either, and Trump himself wouldn't commit to doing it either when he was asked about the matter earlier this week.

Expect this to be A Thing today, is what I'm saying. The easy thing to do, as I see it, is to just wear the mask for a bit and set a good example for everyone else about the tiny steps we can voluntarily take to protect other people. But I think we can all assume it won't go that way.

Do you foresee Trump's visit to the Ford plant making headlines today? How will that go?