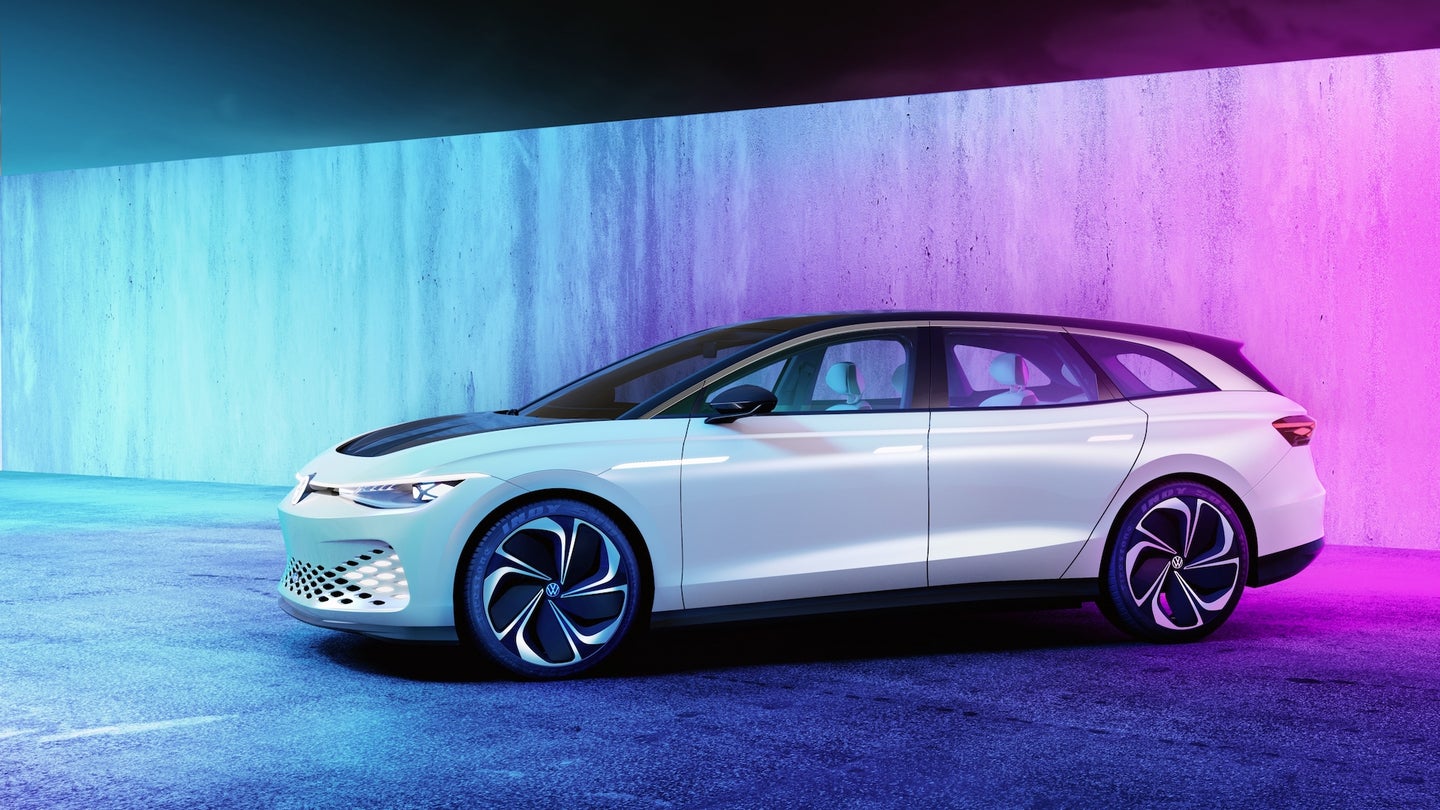 First revealed as a rendering, the ID. Space Vizzion is a conceptual crossbreed between a crossover and a grand tourer. Its 22-inch, low-drag wheels give it ample ground clearance, but its long and nearly Atlas-length body and low, five-foot roofline awards it a wagon-esque silhouette.

Contributing to the Space Vizzion's minuscule 0.24 drag coefficient is a lack of door handles, replaced by light-up, touch-sensitive panels. One of these can also be found on the trunk lid, which with one's arms full it can be opened by waving a foot at a motion sensor underneath the rear bumper. This is only the tip of the technological iceberg that is the Space Vizzion, which conceals most of its trickery within.

Volkswagen has concentrated most of the driving-related displays into an augmented reality head-up display and grouped those less important—such as selecting one of 30 interior lighting schemes—into a 15.6-inch touch screen. Drive modes are selected through the Space Vizzion's column shifter, and HVAC settings are controlled via voice through a Smart Climate system pulled from the new Golf. Call out "fresh air," "cool feet," or "defrost the windshield," and the car will do those things.

Upholstery in the Space Vizzion is an appropriately space-age leather substitute called AppleSkin; a cotton textile reinforced with a composite of polyurethane and organic solids salvaged from the production of apple juice. Only four butts get to enjoy this seating material at a time in the Space Vizzion, though Volkswagen says it could make the car accommodate five if it advances to production, in which case it'd be built on the company's modular electric car platform, MEB.

Using this architecture's highly interchangeable powertrain components, Volkswagen could fit a battery as large as 82 kWh, offering a hypothetical EPA-backed range of 300 miles. Compatible with up to 150 kW of DC fast-charging, the Space Vizzion could recharge from zero to 80 percent in as little as 30 minutes. Once back on the road, the Space Vizzion's 275-horsepower rear-axle motor can launch the car from zero to 60 in five seconds flat, and continue to a top speed of 109 miles per hour. Highway speeds can hypothetically be reached even more quickly if Volkswagen adds a motor to the front axle to give it all-wheel drive, and as much as 335 horsepower.

While we could get excited about how the ID. Space Vizzion seems to portend the station wagon's comeback, we're hung up on the return of "space" in a nameplate. Space!