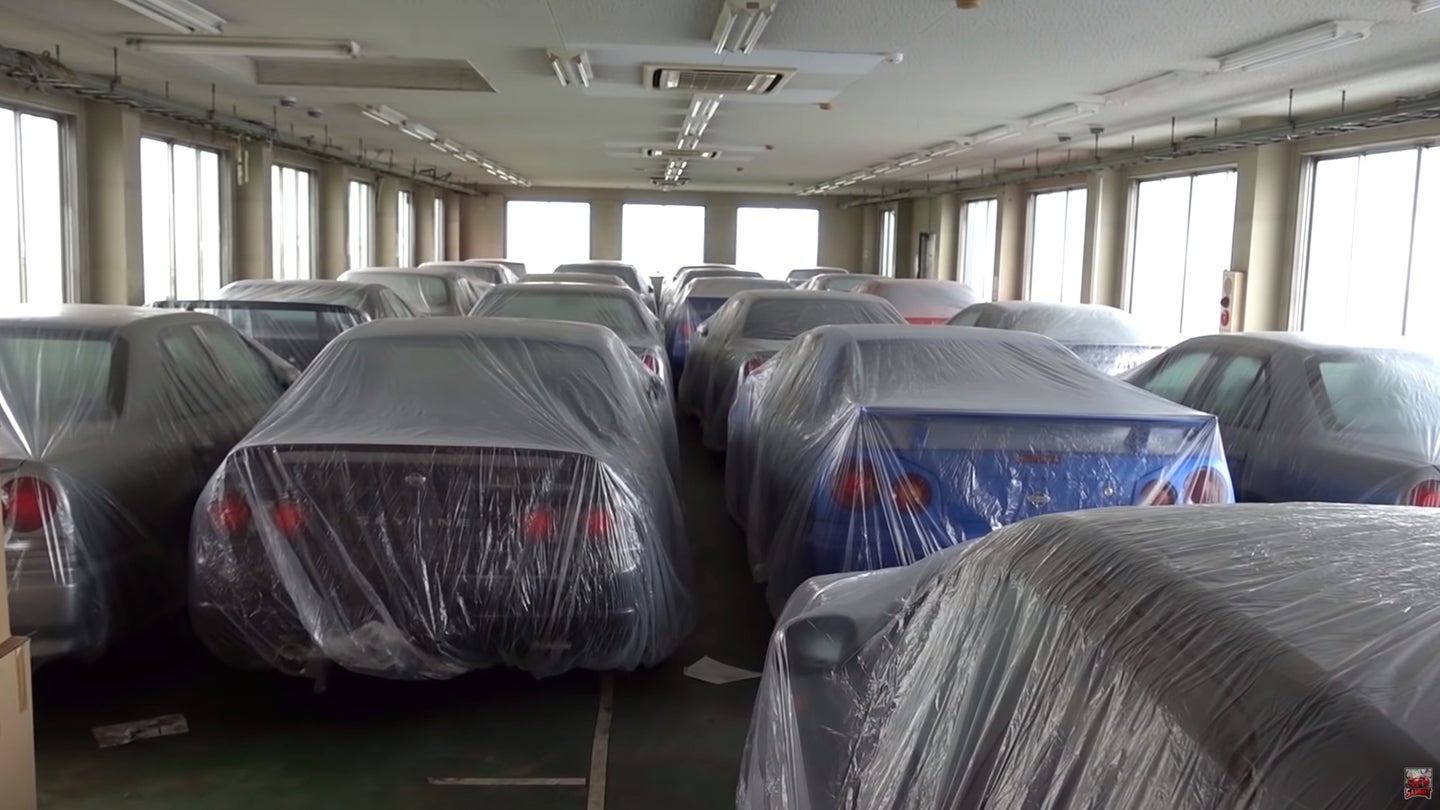 If you’re a fan of the R32, R33, and R34 generations of Nissan Skyline, then grab a box of Kleenex and get ready to drool, because YouTuber SAMMIT recently released a video showcasing a secret warehouse full of seemingly minty Nissan Skyline models. More importantly, these are all allegedly for sale for less than $10,000, along with a massive collection of "new" old stock parts for said models.

The Nissan Skyline mecca is part of a private collection belonging to a Japanese car and parts retail shop by the name of “Trust Kikaku.” The company specializes in aftermarket and OEM parts supplies as well as the sale of used Japanese sports cars.

As SAMMIT walks through the small warehouse for a guided tour by Trust Kikaku’s owner, the video shows the collection of rare and clean cars, all of which are neatly stored and wrapped in protective plastic covers. The models range from non-turbo R32 four-door Skylines, to a few GTT turbo coupes in a wide variety of colors.

What’s more impressive is how cheap the asking prices are. Granted, most of the cars aren’t the top-specification GT-R V-Spec models that usually command higher prices. But rather, one naturally-aspirated Skyline R34 coupe had an asking price of around 70,000 Yen, or the equivalent to approximately $7,000, while another R34 naturally aspirated Skyline sedan could be had for the equivalent of just $2,000. Trust Kikaku’s asking price for a turbocharged R34 Skyline? Around $9,000. According to SAMMIT, such prices beat those often seen at auctions for the same cars.

Already own an R32, R33, or R34? Trust Kikaku also has a massive selection of unused stock parts for those cars.

The past couple of years have been exciting times for enthusiasts of the Skyline. The model’s been on an uptick since many of the R32 and R33 generation cars have been reaching the age of 25 years or older, making them eligible for import into the United States. R34s, however, have a few years before they reach that point.

If you are interested in buying one of Trust Kikaku’s mint R34s, SAMMIT learned that the retailer offers storage options for as low as $50 per month, should you want to claim an R34 now and have Trust Kikaku hold the car at its warehouse until it can be imported legally.