The free-for-all in Craigslist’s used car section is coming to an end next week. 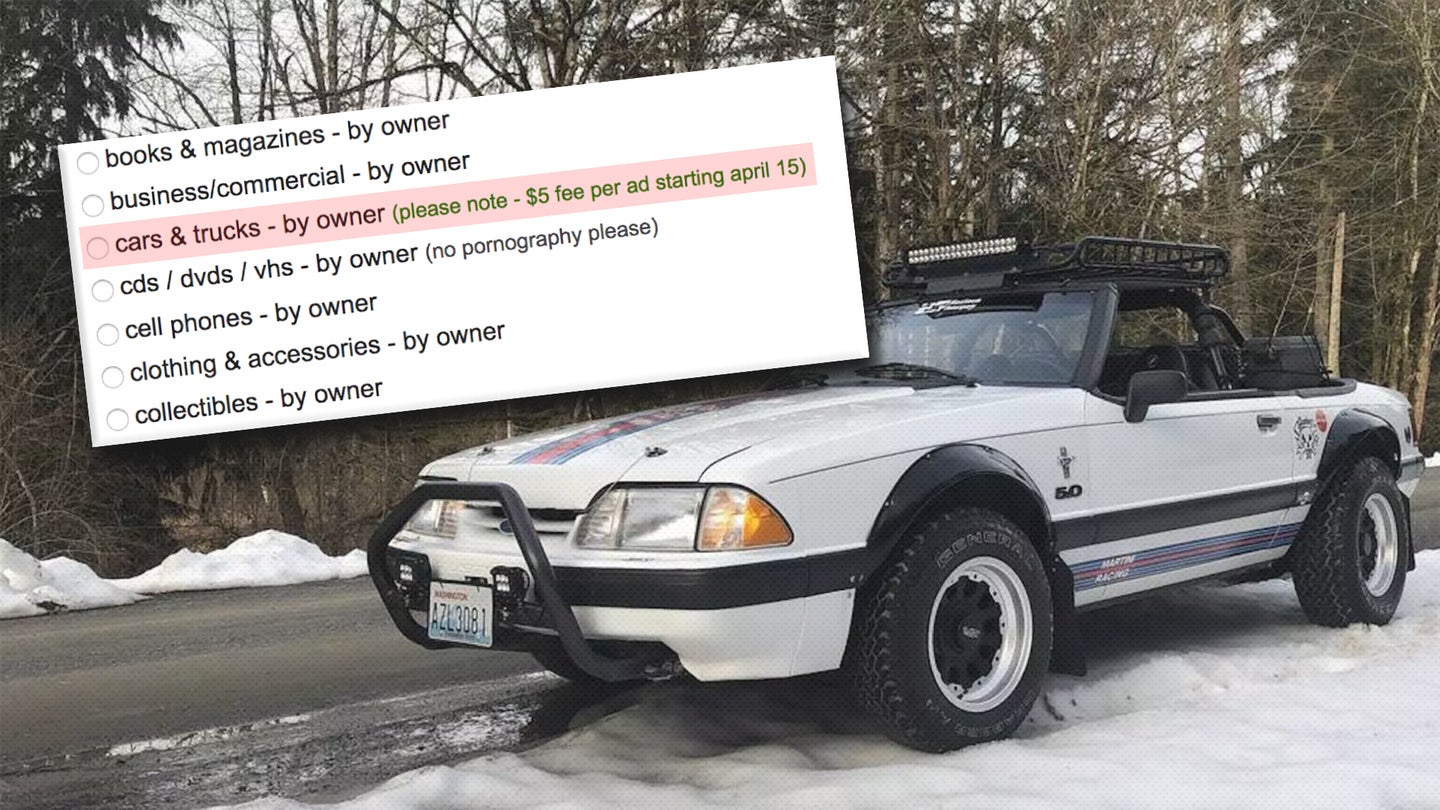 Notable used goods emporium Craigslist.org, long the go-to online home for anyone looking to sell their ruined project car, will be implementing a $5 fee to post a classified car ad beginning on April 15 according to a note on the site's listings page. It marks the first time in the site's long run that private parties will be charged for the service—and in some ways, not a moment too soon.

News of the change first popped up on Reddit; the change doesn't appear on the main list of site-wide fees on Craigslist's landing page, but all it takes is a quick trip through the "Create a Posting" menu to see the notification pop up next to the "cars & trucks - by owner" option. There are no details aside from the $5 charge and Monday's start date.

As noted, Craigslist currently charges various amounts of money for other kinds of posts, including jobs, apartments in certain markets, and car dealer ads nationwide. But its reputation as a free place to list anything from a Baja-inspired Fox body Mustang to a one-of-a-kind 1968 Pontiac GTO has some enthusiasts worried that the site's amazingly diverse used car ecosystem is about to come crashing down. "Wow. Now I guess I can't delete Facebook," reads one typical comment on Reddit, referring to Facebook Marketplace's rise as a Craigslist competitor. "So who's betting craig[s]list will be dead by June 15th?" another asks.

It's understandable, but also slightly misguided. Frequent Craigslist users know the "By Owner" car ads can be anything but, with smaller-time dealers and unscrupulous actors often infiltrating the results with multiple postings for the same car, a lease price represented as an actual purchase price to show up in cheaper searches, and good ol' fashioned scams. There are also plenty of individuals out there posting their car a dozen times to stay at the top of the search results. The free system is ripe for abuse.

Meanwhile, five dollars is neither low enough for someone to easily absorb the cost of a hundred spam posts in an hour, nor high enough to dissuade most any practical seller from counting it as the new cost of doing business on Craigslist. It's still far cheaper than posting your car on a national site like AutoTrader or Cars.com, where a single, time-limited ad starts at $25. Meanwhile, posting your car on eBay will cost at least $60.

Then there's the fact that Craigslist is a business with typical overhead—employees, office space, servers—so in a lot of ways it's kind of remarkable that so much of its platform remains free to use with no external advertising. If five bucks is all it takes to cut down on the spam posts and make Craigslist a healthier marketplace, it'd be hard to say it wasn't worth it.