Ride free, everybody. No one is proposing a nationwide ban on two-wheelin'. 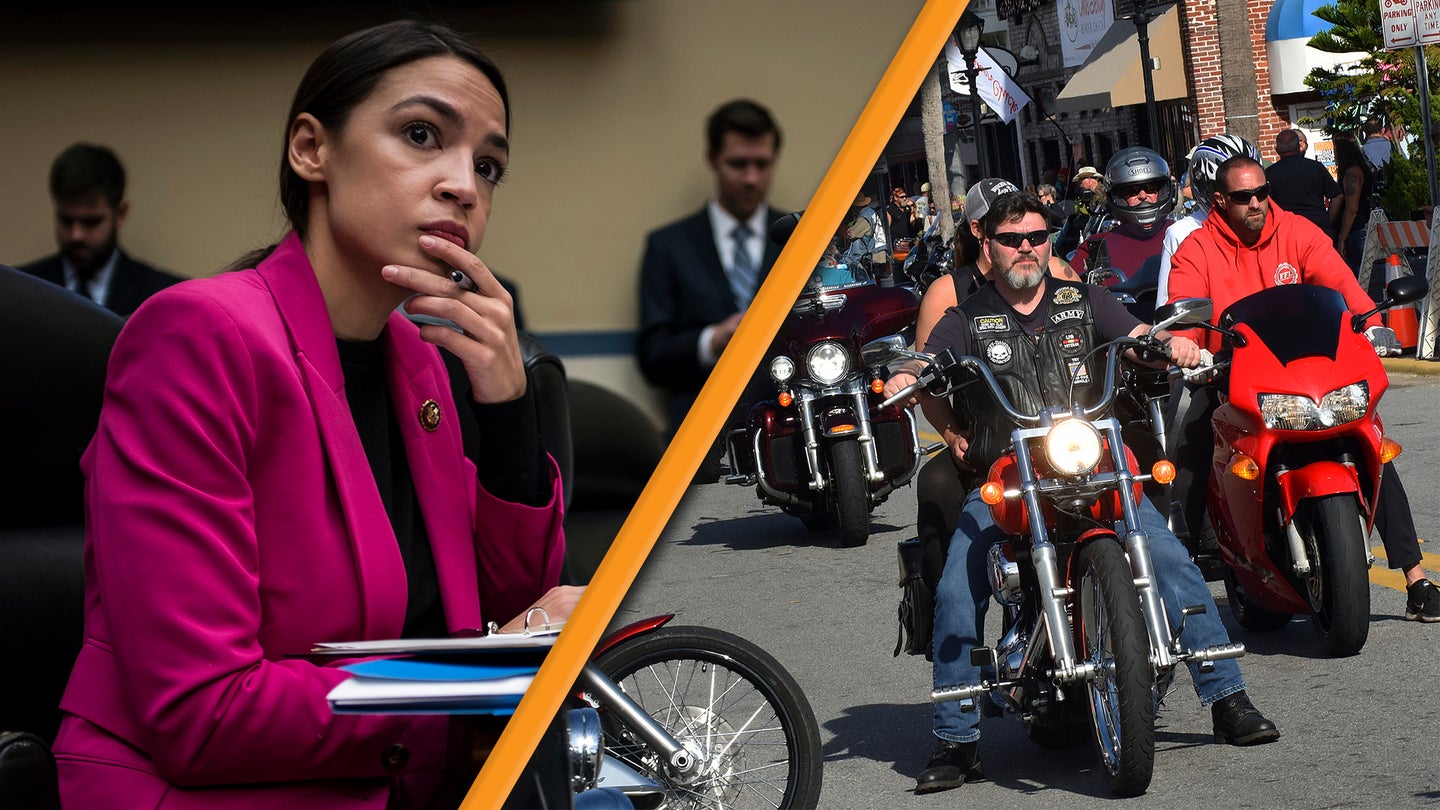 Motorcyclists who may have heard a crazy rumor that New York Rep. Alexandria Ocasio-Cortez is after your right to ride can breathe easy. The fact-checkers at Snopes tracked down the idea of a proposed nationwide motorcycle ban to a site that claims its content is satirical in nature, and not based in fact.

Alexandria Ocasio-Cortez is the youngest woman to ever serve in Congress and an outspoken proponent of various social, economic, and environmental justice causes like the Green New Deal and Medicare for All. It's made the Democrat from New York a constant presence in the media, for better or for worse. The worst of the "worse" side of this has made her the target of particularly harsh criticism that isn't always based in fact as well as the star of conspiracy theories and grosser yet, a fake nude photo.

Snopes tracked down the motorcycle ban idea as originating on the Taters Gonna Tate website, which features a parody of a video game rating in its header graphic that claims the site is "Satire Rated." Its "about" page (archived by Snopes in the state they found it) says it's part of the "America's Last Line of Defense" network that features "parody, satire, and tomfoolery, or as Snopes calls it: Junk News. Because they’re too ignorant to understand what 'satire' means." (Clearly, this isn't the first time these two sites have clashed.)

"Everything on this website is fiction," reads Taters Gonna Tate's "about" page.

Here's what Taters Gonna Tate said to kick off this latest round of "big government is coming for our bikes" hysteria:

Junior Congresswoman Alexandra Ocasio-Cortez has made a lot of waves recently with her Green New Deal nonsense and child-like proposals and speeches. Well, it’s no different this afternoon as the political pixie announced her intention to draft legislation banning motorcycles from use in the United States of America.

The Senorita of Socialism threw out all manner of statistics regarding deadly accidents and injuries, relaxed traffic rules, and tolls for bikers, as well as a not-so-veiled jab at a core demographic of President Trump’s supporters[.]

The article makes up quotes for Ocasio-Cortez as well as a "Bikers for Trump" spokesman with the completely obvious joke name Clee Torres. It's also filed under the tag "Dream Come True For You Fan Fiction."

While it's pretty clear to me that Taters Gonna Tate considers itself to be some kind of right-wing, The Onion-style outlet, the joke it's going for ultimately doesn't land because some people ended up taking it seriously.

Perhaps the worst part of this rumor is how little sense it makes. Sure, some real-world governmental actions don't make much sense, either, but there's usually at least a clear belief or trail of money to follow that explains how they happen. Why would someone like Ocasio-Cortez, who's constantly advocating for the environment and the working class, ban one of the most fuel efficient and affordable forms of motorized transportation out there?

Motorcycles are good, and a record number of American households have them right now. So, thank goodness they're here to stay.