You're looking at the world's first application of electric active suspension. 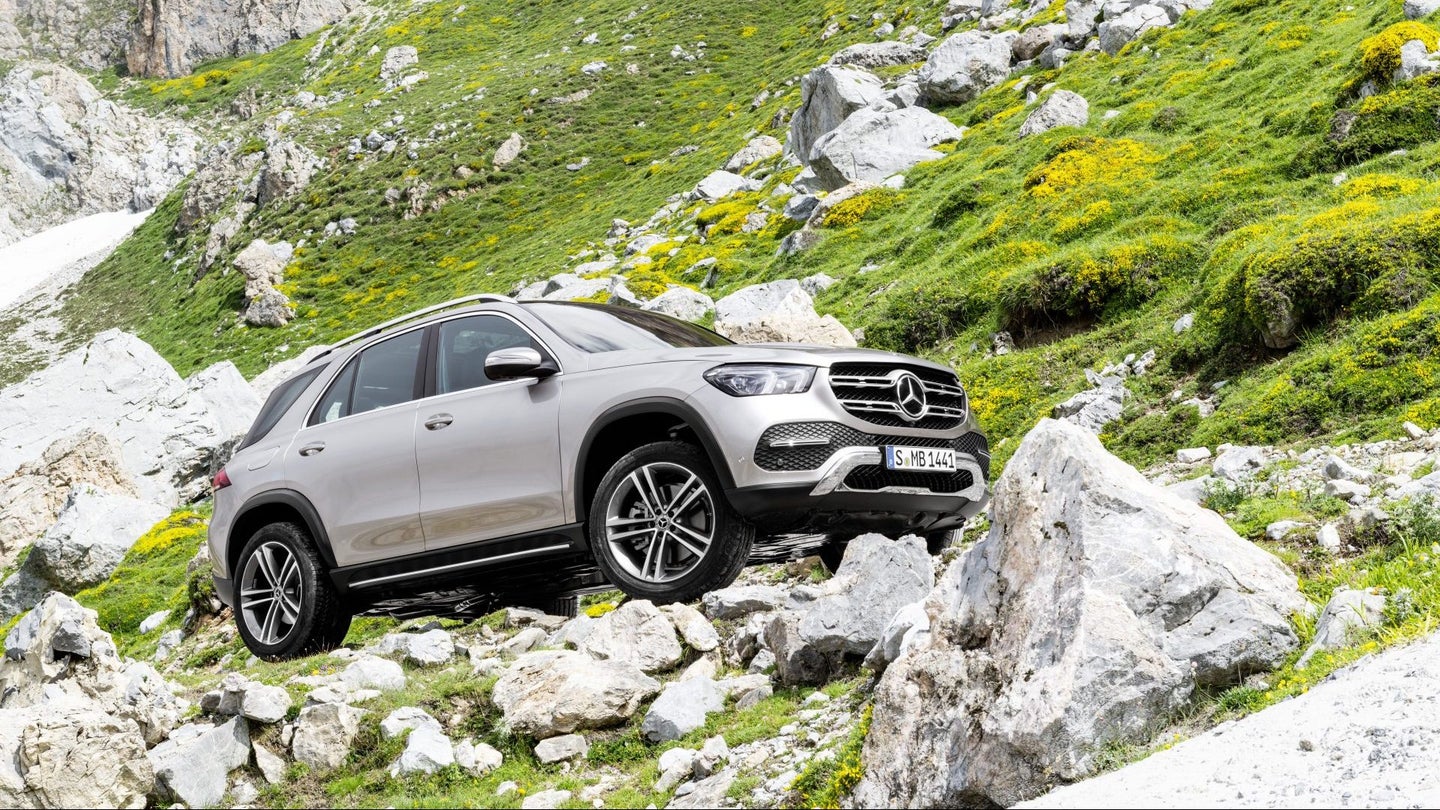 Topline: Mercedes-Benz debuts the newest iteration in its midsize GLE crossover that traces its lineage back three generations to the original M-class of 1997. With it comes tech aplenty, as is expected of luxury vehicles today.

What's New: As the 2020 GLE is a comprehensive redesign, everything between the wheels and the driver has been overhauled. Standard equipment for the 2020 model year starts with Mercedes's new MBUX infotainment and navigation system, controlled by touch or voice. It speaks to both Apple and Android smartphones, and can charge as many as five devices at once through its numerous USB ports. Keyless push-button start is standard equipment.

A loading-friendly tailgate eases luggage into the 2020 GLE's load space, which comes with a cover, provided the optional third-row seating isn't specified in the ordering process. Wheels 19 inches across are standard, though they can be traded for 22-inch alloys.

Safety starts with a set of assists that watch blind spots and maintain driver focus, and automatic emergency braking can save a driver's bacon if the former two don't cut the mustard. Ultra-bright LED headlights and taillights keep GLEs visible, and should a tailgating driver somehow miss these, an automated system plays a sound that will trigger occupants' stapedius reflex to limit hearing damage in a rear-end collision.

Maniacal attention has been paid to aerodynamic drag reduction in the name of gas mileage. Spoilers can be found on the fender ahead of each wheel, on the wheels themselves, on the D-pillars, and around the taillights. Underbody paneling is as flat as Mercedes can make it.

Powertrain options also reflect this, and are made up of either a thrifty 2.0-liter turbo-four with 255 horsepower and 273 pound-feet of torque, or a 3.0-liter turbocharged inline-six with 362 horsepower and 369 pound-feet of torque, coupled with a 21-horsepower mild hybrid boost. Both are linked to a nine-speed automatic transmission, and in 4Matic models, all-wheel drive. Gas mileage? That’s still to be determined.

Of the most importance is the new electric active suspension system, or as Mercedes calls it, E-Active Body Control. Running on the vehicle's 48-volt circuit, it scans the road ahead and sets each corner of the car up for the surface undulations and potholes ahead. On top-level GLE 450 4Matic models, this can be paired with air suspension to reduce perception of road surfaces from double chocolate chunk to ganache.

Quotable: "The new GLE is not only more comfortable than ever before on the road, but also shows its superior off-road character off the beaten track," stated Ola Källenius, corporate research lead at Daimler and Mercedes-Benz, in the vehicle's press release. "This alone shows our determination to reinforce our claim to leadership in the SUV segment."

"Significantly more space in the interior, the new control concept, considerably extended and refined driver assistance systems, the best aerodynamics in the segment, a completely new range of engines and numerous other innovations emphatically underline this."

What You Need to Know: Three GLE variants will be available at launch, including the GLE 350 with the 2.0-liter engine and optional 4Matic all-wheel drive, and the GLE 450 4Matic, which upgrades to the 3.0-liter engine, and can equip the E-Active electric active damping and air suspension. 4Matic models arrive at Mercedes dealers in spring of 2019, the base model following in the summer. Pricing remains unannounced, but expected is a $995 delivery fee.

Also consider the comparable BMW X5 xDrive45e, which offers an increased degree of hybridization, and can be driven on electric power alone. If electric assistance is make-or-break, however, consider holding out for the Mercedes-Benz EQC 400, on its way for a 2020 arrival. Audi wouldn't mind your attention either, as its electric e-Tron crossover starts deliveries early next year.