Dramatic Changes Ahead for Global Auto Market, But America May Lag, Report Says

New Cars in Europe and Asia will be largely electric by 2030, while America may continue with internal combustion engines. 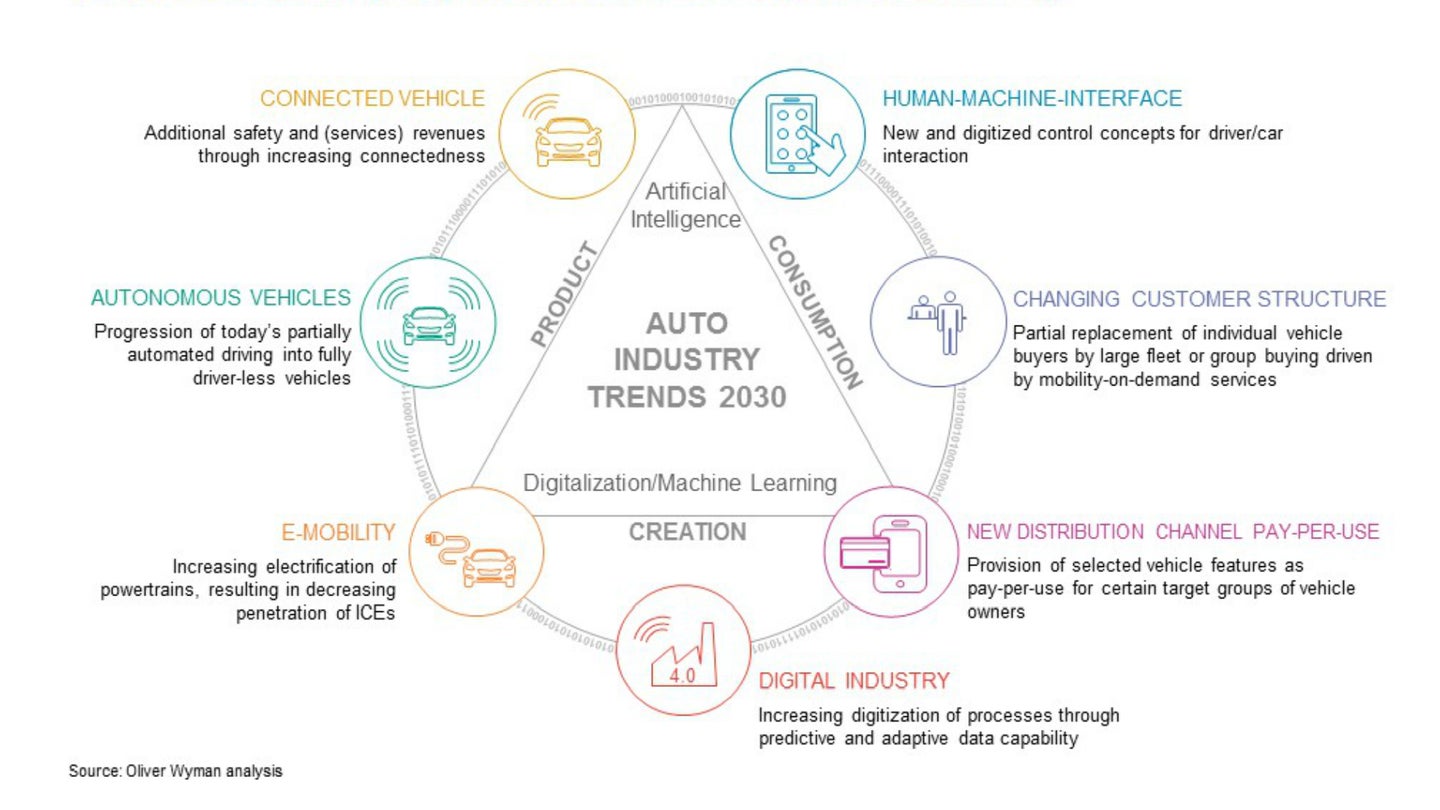 A new report on the coming automotive landscape finds autonomous technology, the electrification of powertrains and embrace of new distribution channels increasing globally, especially in Europe and Asia.

The findings of the Future Automotive Industry Structure report are based on more than 100 interviews with managers and specialists in the global automotive industry. It was produced by the management consulting firm Oliver Wyman in collaboration with the German Automotive Association (VDA), a trade group made up of auto manufacturers and component suppliers.

By 2030, the report posits that most new vehicles sold in Europe and Asia will have some form of electrification, being either fully battery powered or a hybrid. Vehicle electrification is also expected to increase in the U.S., but the report finds internal combustion engines (ICE) will likely remain the most popular powerplant for cars and trucks.

“America will fall behind much of the rest of the industrial world in electrification, at least with its current legislation and government incentives,” said Joern Buss, a partner in Oliver Wyman's Global Automotive Practice in Detroit.

The report notes that autonomous driving technology should be advanced enough by 2025 or 2030 to allow for vehicles to drive without human input, but Buss believes the actual adoption of such technology may be delayed at the middle and lower ends of the market.

“Full-autonomous tech will still add thousands of dollars to a vehicle's cost in 2030,” Buss said. In 12 years time, he expects self-driving cars will be a relatively common sight on the road, but mostly centered on the higher end of the consumer market and in industries where driver pay is a big expense, such as trucking and on-demand transportation companies such as Lyft and Uber.

Buss also expects dealerships to come under increased pressure in the coming years. “Manufacturers are pushing for a subscription-based model to compete with traditional buying and leasing,” he said. “With a subscription, you'd have access to vehicles when needed, but would not have an ownership stake. The manufacturer would still own the car, and dealers would lose out on sales.”

He noted that dealers would also lose out on servicing, which is a large chunk of their profits because self-driving vehicles are expected to get into fewer accidents, and electric vehicles tend to have reduced maintenance expenses compared to those powered by internal combustion.

Toyota’s virtual co-pilot ‘Yui’ could become the KITT to your Michael Knight.

Widespread adoption has cultural barriers, too.