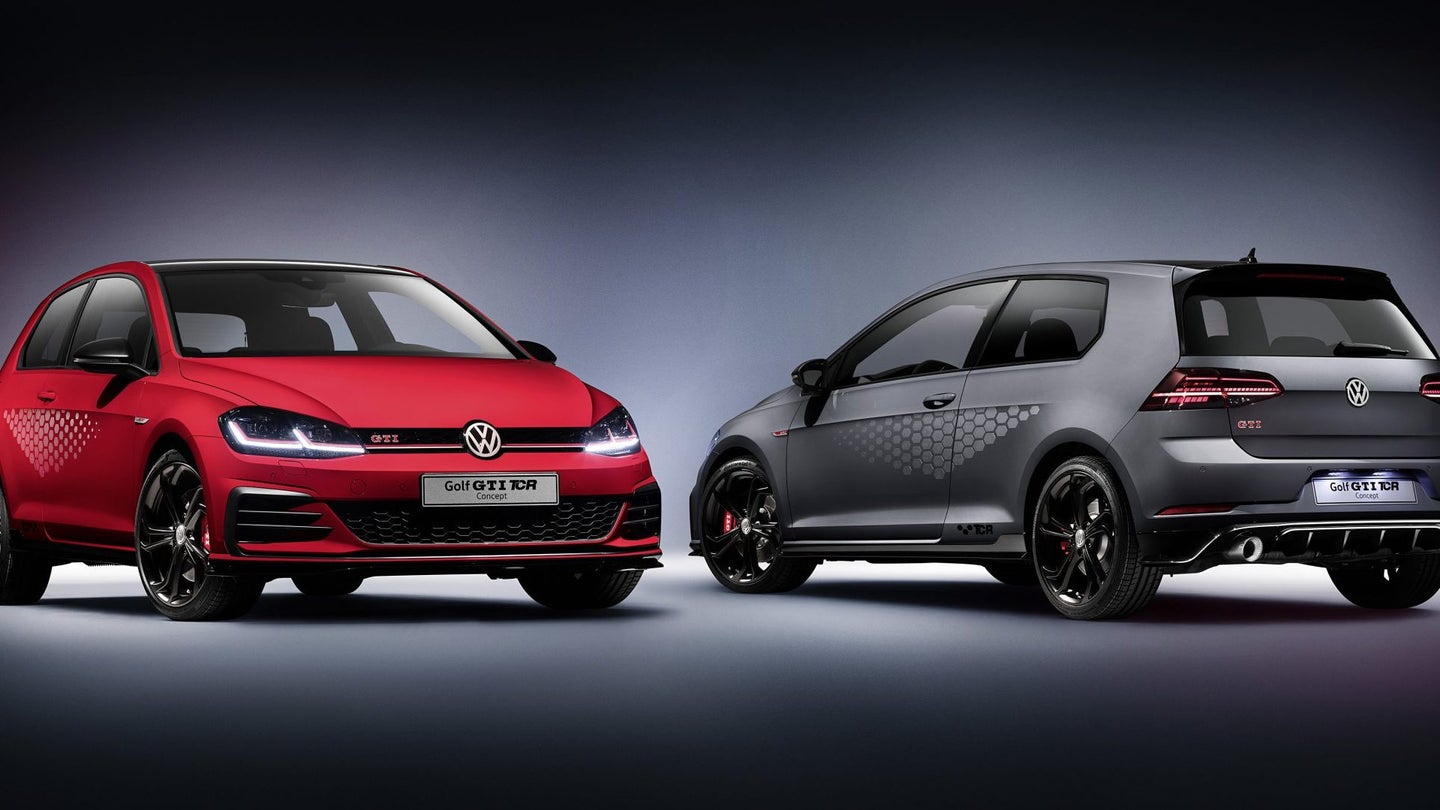 Volkswagen dragged a bite-sized sample of its Golf GTI TCR under our nostrils last week in the form of multiple concept renderings, and Thursday, it delivered the full entree on a silver platter to Wörthersee Festival. The Golf GTI TCR takes the already-caliente Golf GTI and dips it in the juices of the ghost pepper, withdrawing it with extra horsepower and an altered appearance.

Of note is the GTI TCR's escalated horsepower output of 286, which is 66 more than is standard in the GTI. If allowed by an optional 155 mph governor delete, the GTI TCR can scramble its way to a top speed of 164 mph. Peak torque of 273 pound-feet arrives at 1,600 rpm, and the seven-speed DSG dual-clutch automatic transaxle allows drivers to keep the engine's rpm exactly where it is needed. The integral limited-slip differential enforces traction on the drive wheels, made more unruly by the power bump to the base GTI.

Speaking of wheels, 18-inch "Belvedere" forged aluminum wheels come standard, though they can be upsized to 19's. The powered-up powertrain needs an equal in the braking department, which is handled by TCR-exclusive brake calipers, pads, and drilled rotors. Cornering grip is maintained by the car's chassis mode settings, which utilize DCC electronically-adjusted shock absorbers, provided customers tick the option's box.

A redesigned front bumper eats air to cool the car, and changes made to the TCR's splitter, skirts, and diffuser prevent it from going airborne at high speed.

Seat covers and sticking on the wheel and shift lever sport red highlights. With the door open, a TCR logo is projected on the ground, and the stainless steel door sills glow red.

The GTI TCR is just a concept for now, but Volkswagen wants the car to make production. "At the moment, the Golf GTI TCR Concept—an athlete derived from racing—is a study," stated Jürgen Stackmann of Volkswagen AG in the car's press release. "But at the end of the year, we want to make this GTI vision come true."

Though the intent is to roll the GTI TCR into showrooms before 2019, don't expect to see any at your local Volkswagen dealer, as VW AG confirmed to The Drive that the GTI TCR is not coming stateside.

The GTI TCR will enter a changing landscape of hot hatchbacks, in which the Honda Civic Type R and new entry Hyundai with its i30 N and Veloster N will assume the role of the departing Ford Focus RS and Fiesta ST. We can only hope Toyota joins in on the fun too.