This one's really got it all, folks 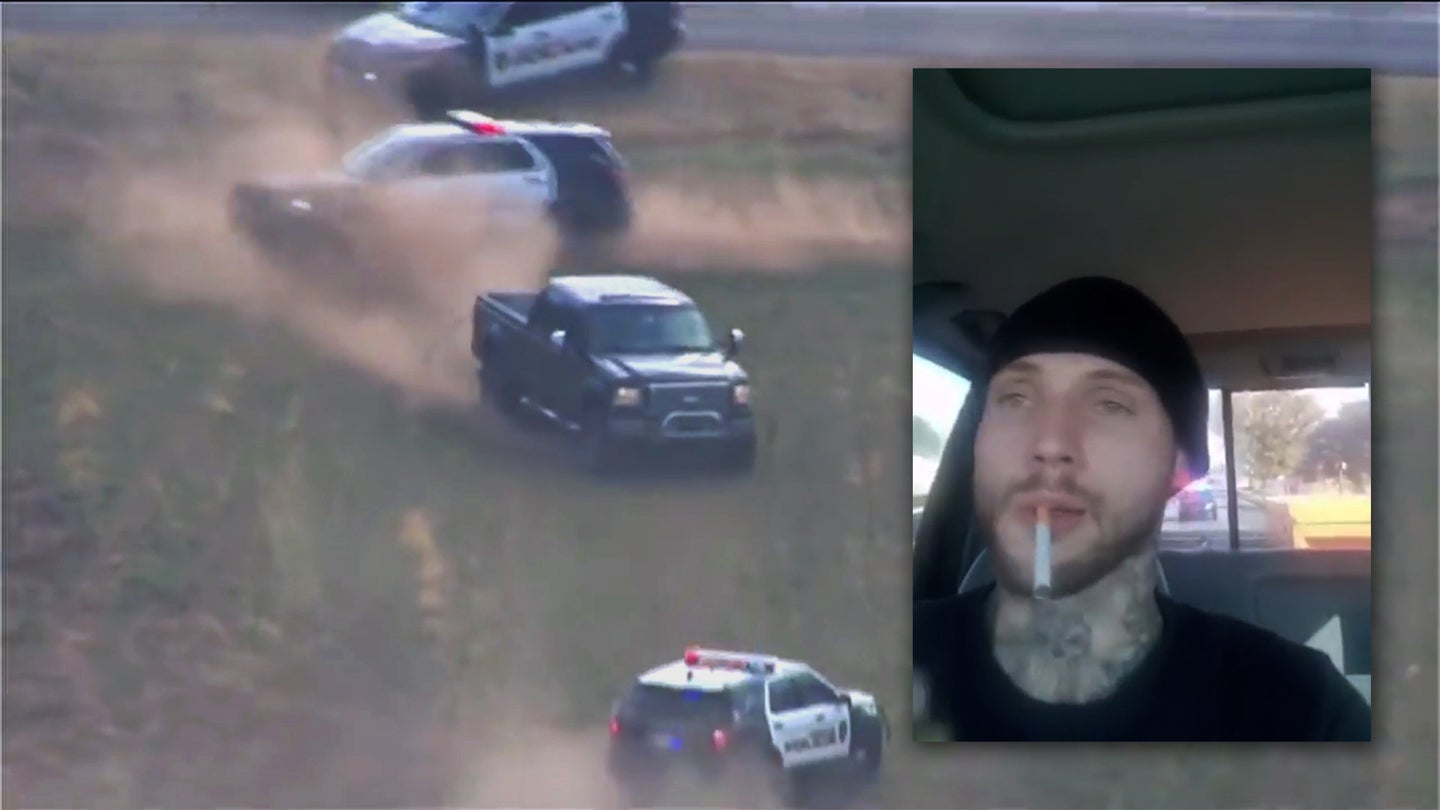 Watching police chases is always a bit of a guilty pleasure. For every Vanishing Point-esque run featuring a white Dodge Challenger Hellcat screaming through Texas, there's ten more where the driver's actions put innocent lives at risk, not to mention the officers themselves. So if you're going to watch a police pursuit, you might as well get your karmic money's worth and check out this doozy from Oklahoma featuring a stolen 2006 Ford F-250 pickup, a gun-toting vigilante pastor, and some truly wild off-road antics—all livestreamed on Facebook by the drug-addled convict behind the wheel.

The epic chase started when Oklahoma City police officers spotted 25-year-old Brenton Hager cruising in the stolen truck, which had been taken from a house in nearby Bridge Creek on November 3. It's not clear how long the pursuit was happening before Hager started broadcasting on Facebook Live, but at some point he grabbed his phone, opened the app, and became the second case we've seen of a suspect livestreaming their own chase this year.

The 15 minute video shows Hager alternatively staring at the road, taking drags on his cigarette, and making comments about the chase, all while sirens wail and police cars are visible in the background. He talks about his family, how he doesn't want to pull over because the police will "beat his a**," how much gas he has left (89 miles worth, according to the computer), and how slow other people are driving. At one point, he mocks officers as he drives around a stop stick, saying "Didn't get your spike strips out fast enough, homie."

One hilarious bit happens around 12:18, where he comes to a dead end and debates ramming a barbed wire fence to get into another field. As he decides to go for it and punches the gas, you can hear his phone's GPS say Please drive to the highlighted route just a split second before he crashes through the wire. A few moments later, it tells him to make a U-turn. He eventually gets out to check whether the barbed wire popped any of his tires, and that's where the livestream finally ends.

However, the whole chase was simultaneously being broadcast live on local news, and it's the aerial coverage that captured the true insanity that followed. After driving through several fields, Hager makes his way back onto the suburban streets of Moore and stops at a random dead end to ditch a heavy toolbox in the bed. As he struggles with it, a local pastor named Craig Wright comes flying out of nowhere in his old Honda Accord station wagon to box in Hager's truck. Hager appears to confront him, then changes his mind as the pastor steps out, pulls out a gun, and shoots out the pickup's left rear tire before Hager manages to flee through the yet another field.

That was the beginning of the end. The rest of the helicopter footage shows Hager cutting through open fields and wildlands, gradually losing control as the back tire basically spins off the rim. Officers attempt to PIT him several times, at one point nearly ramming him into a news van, but he's always able to get away—that is, until he starts backing up wildly to escape an officer with a shotgun and reverses straight into a nearby pond. After a short foot pursuit in which his pants fall down, officers subdue him with a stun gun and take him away.

The two-and-a-half-hour pursuit crossed several jurisdictions as it wound from the highways of southern Oklahoma City to the open fields of the city limits. On Monday, Hager was charged with eight counts, including felony assault on a police officer with a dangerous weapon, according to News9.com. Hager's aunt told KFOR that her nephews actions were "100 percent" the result of his drug addiction. Officers also detained Pastor Wright briefly, but decided against charging him with anything.