Critic’s Notebook takeaway: The convertible to rent when they’re fresh out of Mustangs. 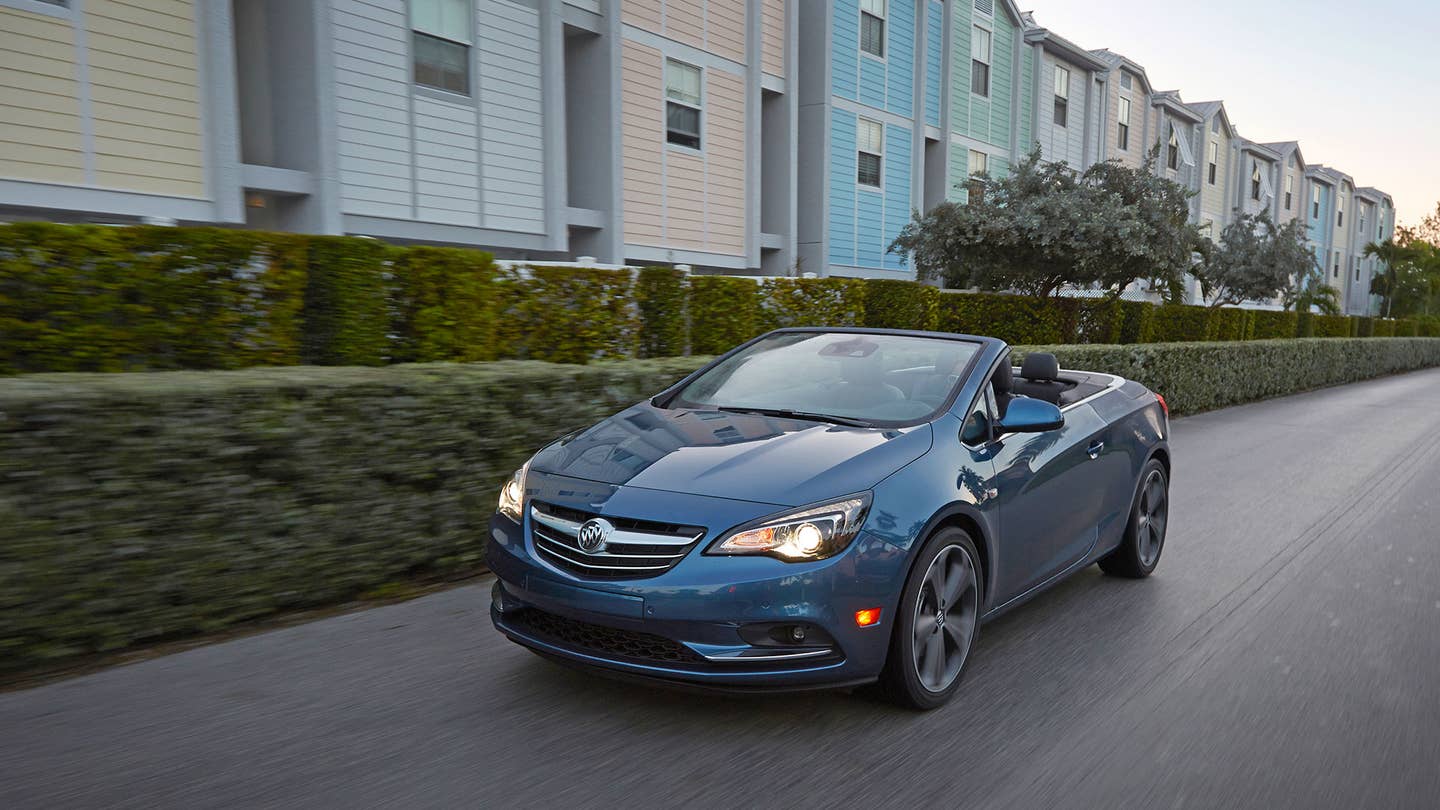 Welcome to Critic's Notebook, a quick and off-the-cuff collection of impressions, jottings, and marginalia on whatever The Drive writers happen to be driving. Today's edition: The Buick Cascada.

I love a good convertible. Then there’s the Buick Cascada. General Motors’ rebadged Opel convertible wants you to feel the breeze, but it’s more a breath of stale air.

Buick is actually doing a decent job of reinventing itself, especially with the Encore, the nation’s surprise best-seller among subcompact crossovers. But the Cascada’s “good-enough” approach recalls the bad-old, pre-bankruptcy General Motors. It’s a stopgap and a showroom filler, a car GM brought over from its European Opel division because it could, not because of any pressing need – corporate, consumer or otherwise.

Buick’s first convertible since the unloved 1990-91 Reatta roadster has a few things going for it. Affordable drop-tops with genuine space for four adults are rare. The Cascada’s 32.8 inches of rear-seat legroom tops the Mustang convertible by two inches and the Chevy Camaro by nearly three. Pivot the front seat back, and the chair automatically powers forward for easier rear-seat access. That’s fairly common in today’s coupes. But the Buick takes a social-climbing cue from Mercedes’ S-Class coupe: When the seat motors back into position and brushes a rear occupant’s kneecaps, it scooches forward slightly to leave a bit of clearance.

Unlike some convertible predecessors, the Buick is neither an embarrassing eyesore (PT Cruiser), as limp as twice-cooked pasta (Chrysler Sebring/200) or both (Nissan Murano CrossCabriolet). The Buick hunkers on 20-inch wheels, with rising bodyside creases that at least suggest a bold escape from the Target parking lot. But the Buick’s jellybean styling is already looking played-out, as befits a Verano-based front-driver that’s been on sale in Europe for more than three years. If the Mustang and Camaro are black leather jackets, the Buick is mom jeans.

The interior seems even more dated, a collection of Buick’s Greatest Hits that barely charted the first time you experienced them. The aforementioned seats, clad in perforated off-white leather, were the only persuasively premium touch, unless you’re excited by standard heated seats and steering wheel. The rest includes a dreary, red-lit LCD driver’s display, a confusing smear of buttons and an infotainment system whose touch screen, buried deep in the dash, seems barely larger than an iPhone’s. Buick, you’re better than this.

The fabric roof is a literal topper, a snug-fitting affair that powers opens in 17 seconds and closes in 19, all via a console switch. With the sun and temperature falling, I barely had to slow down to shut the top on a Long Island thoroughfare, with the roof operable at speeds up to 31 mph.

Despite its soft roof, the Buick’s structure did feel battleship-solid over every New York obstacle, from ankle-high manhole covers to steel construction plates. Unfortunately, the Buick weighs as much as the Bismarck, flirting with 4,000 pounds before the first passenger hops aboard. Anchors aweigh, mateys: A 1.6-liter Ecotec four-cylinder is the only engine choice, and 200 horsepower isn’t much motivation for a two-ton car. The engine is pleasant enough, though devoid of character, in tandem with a six-speed automatic transmission. But acceleration takes longer than a Ted Cruz filibuster. Roughly 8.5 seconds elapse on the way to 60 mph. Among convertibles, you’ll be assured of beating a Smart ForTwo Cabrio, and that’s about it.

Handling and braking offer more of the same. As the name implies, the Cascada is more a lazy trickling brook than a torrent of performance. This car practically hummed tra-la-la as I cruised New York and environs. Ride quality is commendably smooth, but the only thing sporty about the Cascada is the sunscreen you’ll need to apply.

The Cascada should surely outsell the shoddy and disastrously overpriced Reatta roadster, which found fewer than 3,000 buyers over two forgettable years. By how much, though, is anyone’s guess – especially for an understated, underpowered convertible that hardly screams “bargain” at $33,990, or $36,990 in Premium trim. A base Mustang convertible costs $3,400 less, and that’s with a 300 horsepower V6. A ragtop Camaro costs $400 less, with a 275-horsepower turbo four. Both run circles around the Buick, from style to performance. Then there's the Audi A3 Cabriolet, which can top $40,000, but seems to hail from a more-advanced, speedy and fashionable planet.

Buick is pitching the Cascada as some kind of halo car for the brand. Barring a miracle, I’ll predict that most Cascadas will bask in a more-temporal glow: The bright lights of a Florida rental counter.

Sleek fastback is all a concept car should be: beautiful and unproducible.

Men in ties play with clay, build a country.